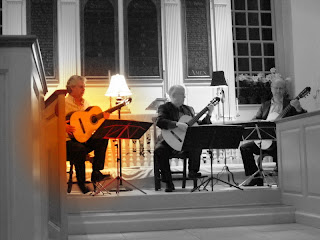 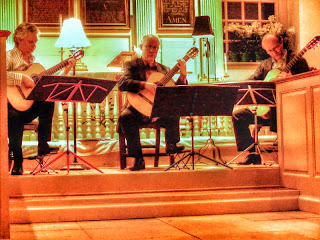 Arts at the Abingdon Episcopal Church has just finished up their concert events for the year. This ending was a very nice touch with the wonderful selection of Rodrigo Guitar Trio featuring Raymond Burley. This trio was outstanding. World class classical guitar. We had the chance to meet the members of the trio and they were all just incredibly gracious.

We asked for the chance to film them but they turned down the request for some very valid reasons. One, they felt it was to much pressure to play under knowing they were being recorded and two, one of the usual members of the trio could not make this trip so they had another person filling in who was just getting used to playing with the two usual players.

We got to spend some time with Raymond Burley who truly is a world class expert on guitar. Raymond started playing guitar when he was 10 years old. He has played with Rod Stewart and performed on tracks with Elton John and Sting. So it is interesting that he started out as a pop musician and still does a good bit of work in the Rock and Roll industry. We had him autograph one of the CD's we bought while at the event. I was surprised to find out he is left handed. He plays the guitar right handed. He had a valid point though, he was taught that way and never thought about it. If your left handed, you do not cross your hands to play the piano in a left handed manner. The point well taken.

The three performed like they had played together for years. I only detected two minor misses during the entire event and considering they just arrived in the US a few days ago, that's pretty amazing. The other two members of the trio are Arne Brattland who is from Norway and presently resides in England, and John Feeley who comes from Ireland. Both Arne Brattland and John Feeley are highly accomplished artists with world class recognition.

Here is a video to give you an idea of what you missed.

If you missed the Tewkesbury Abbey Schola Cantorum choir at the Abingdon Episcopal church a few weeks ago, you missed out on a fantastic performance. Do not make the same mistake again though. The Rodrigo Guitar Trio featuring Raymond Burley will prove to be a must see. Click Here to view their web site. If you do not know who Raymond Burley is, please do yourself a favor and do a Google Search on him. He is a world class classical guitarist. This is a chance to see the best of the best.

We are going to try and see if they will allow us to video tape them while they are here. No promises as there is very little music found on line at this time. I have found a few videos of Raymond Burley with other guitartists, but not this trio. So I do not have a video to post. If they allow me to video them, I will host the videos on Youtube, here, and on one of our other sites, the New Million March for God web site. So if you are looking for some world class entertainment, this will truly be the place to be. Hope to see you there.
at 1:21 AM No comments:

Golf Course In Gloucester County VA, Time To Tee Up

With the weather getting warmer, it's time to start hitting the Golf courses once again. Gloucester has it's very own well hidden course known as the Gloucester Country Club. Click Here to visit a web site that has information about the course. If you are an avid golfer or looking for a nice golfing destination, this isn't it. This is the type of place you take beginners to or where you go to work on your long or short game without being embarrassed.

I wouldn't plan a tournament here unless it is for first time players, but I am also not knocking the place as it serves a very valid and needed service for golfers who need a place to improve their game that is not at the expense of others around them and not by any means what one could call expensive. You can actually have a great day here while losing a lot of golf balls. So come on out and bring your slice with you.
at 6:15 PM No comments:

The Signs of Spring in Gloucester County, VA 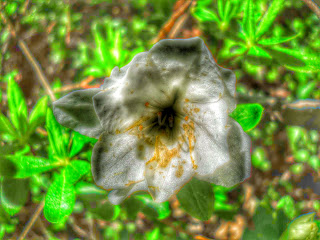 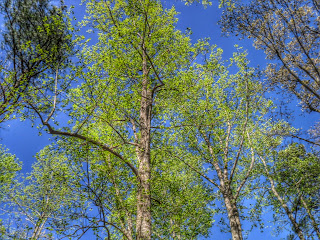 The signs of spring are popping up all around us. It's nice to see the green again. The flowers on the Azalea bushes are now blooming. It's a bit chilly but nice to see everything growing once again.
at 4:43 PM No comments:

The Easter Bunny In Gloucester 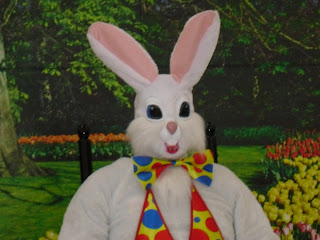 Happy Easter Everyone. Just a quick note that we saw the Easter Bunny just before he started his deliveries and he was very excited about delivering goodies to all the children here. Plus all the Easter Egg hunts he has been busy planning for so many of us. And for us adults, it's a time of celebration of the gift that Christ has given us all.