Irene is now really starting to pick up strength now here in Gloucester. The winds have picked up quite a bit and in the distance it even sounds like a tornado is hitting. This video was just shot moments ago along route 17 just outside our present command center. Branches are now being pulled off of some of the trees behind and along side of us. Power has been flickering on and off. But still nothing major. Dominion Power trucks are still traveling along 17 so that is a good sign. The worst has not even begun yet. Maybe we were wrong about this storm? It might just be a bit stronger than what we have been expecting.
at 1:27 PM No comments:

The folks over at Nick's Spaghetti and Steak House wants everyone to know that they will be open today to serve you even if the power goes out. Good to know should the power go out. A fine menu over at Nick's.
at 1:04 PM No comments:

Email ThisBlogThis!Share to TwitterShare to FacebookShare to Pinterest
Labels: Nicks Spaghetti And Steak House Open Today Even If Power Goes Out

The winds have picked up again and are now blowing pretty hard. The rain is coming down harder and everything is mostly coming in from a northern direction. While we were outside, we spotted a Dominion Power truck traveling north on 17 so they are out and ready to respond should things get worse. This is a good sign that they are pro active.
at 12:29 PM No comments:

Email ThisBlogThis!Share to TwitterShare to FacebookShare to Pinterest
Labels: Virginia Dominion Power Trucks On The Road

Here is the link for the Coleman Bridge updates. You have to select Hampton for area updates. We are working on keeping all the information updated on here as much as possible so you can plan your day during this storm.

If you are considering traveling across the river towards Norfolk or VA Beach, you want to take another route than I-64 crossing the Hampton Roads Bridge Tunnel. The bridge tunnel is closed due to the high winds and the storm.
at 11:42 AM No comments:

Wal Mart along with a number of other retailers around the area are doing business as normal. The store is open but they are sold out of D batteries and bread at last known report. The majority of the retail stores if not all of them are sold out of D batteries. Other updates show that we are about 8 hours out from the worst part of this storm. Otherwise there is nothing really going on.
at 11:39 AM No comments:

We checked the updates for the Coleman Bridge and there is nothing news. The bridge is listed as open and conditions are cautionary due to high winds, but otherwise travel is fine.
at 11:36 AM No comments:

We have to hand it to the mail carriers. One just went southbound on 17 delivering mail as usual. The scare of this storm has not at all deterred the mail. Nice to see as it has been our opinion from the start that this would be a none event event from the start. Although we are not making light of the flooding in low lying areas. That part is serious, but the rest is nothing at all on the mainland.
at 11:17 AM No comments: 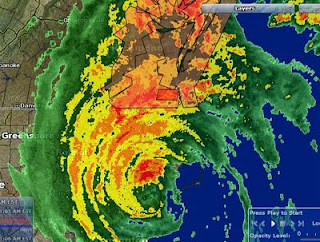 At 11:00 AM the radar shows that the storm is right over head. Pictures from low lying areas coming in all across the Internet are showing major flooding. Other areas for the most part are fine however. Winds have once again calmed down for this area. Still blowing but nothing at all major.
at 11:08 AM No comments:

Email ThisBlogThis!Share to TwitterShare to FacebookShare to Pinterest
Labels: Storm Fully Overhead At 11:00 AM

Wind Gusts Starting To Pick Up 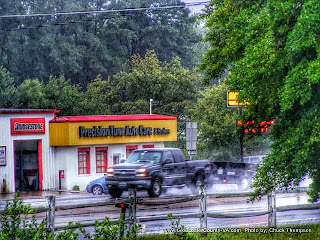 At 10:30 AM the wind gusts are starting to pick up around here. Traffic remains steady along 17 though fairly light for a Saturday. Rain is still about the same at a steady average flow. We are monitoring events around the state and talking with others around the nation now finding that a number of people are very interested on what is taking place.
at 10:37 AM No comments:

Email ThisBlogThis!Share to TwitterShare to FacebookShare to Pinterest
Labels: Wind Gusts Starting To Pick Up

It's 10:00 AM and we have just finished setting up base at a location we negotiated along route 17. Objective to bring you news throughout the day until power goes out should that actually happen. The rain started at about 3:00 AM with some nice mild winds coming at us, but nothing at all major. At about 7:30 AM the winds and rain had picked up considerably. Still nothing at all alarming. Here at 10:00 AM we have some fair wind gusts and average rain but still nothing that would concern the average person. Plain and simple, we need this rain.

With a state that has already been rocked with an earthquake that is not normal to the area earlier this week, we are now facing what is potentially a strong hurricane. With hurricane's also normally comes tornado's. The earthquake has already produced aftershocks to the tune of 6 total that we are aware of and has caused some damage in northern Virginia. Imagine if we end up with yet another quake in the middle of a hurricane and even have twisters dancing around us as well. The makings of a great disaster movie.

Well I am not at all concerned. I just do not think we are going to get hit with all that much other than some strong winds and much needed rain. If I am wrong, well then we are set up to report on it. We have already shot some footage outside to show nothing other than some vehicles traveling up and down the 17 corridor on a gloomy day with some minor winds and rain. We will get it posted on line before the day is out. We will also be shooting the progression of the storm as it occurs. So be safe and you can keep your eyes on here until power goes out, then we are done bringing you any updates until the power comes back on.
at 10:10 AM No comments: 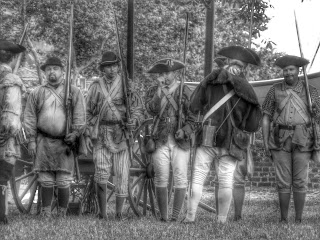 We took the site down for a few days re designing the site. Now it is back up and running and is now a self perpetuating entity. In other words instead of us funding the site year in and year out, it now funds itself. This is now our 4th year serving Gloucester County with this web site. With that said, we recently made some policy changes on what we have been reporting. We will soon be moving those changes to a new site and once again return county news to this site. In our opinion, there is a lot to celebrate here in Gloucester. There are also issues here, but the good outweigh the bad in our opinion. The above picture is from the 7th Virginia Regiment from this past season, May, 2011. A great group that graces us every year sponsored by Gloucester County. One of the many events that are worth celebrating.
at 5:16 PM No comments: