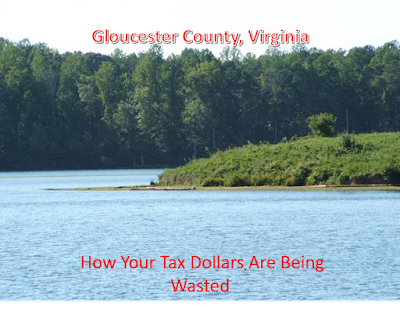 Most Gloucester residents know how bad of a job our local government has done providing Gloucester with safe and quality public drinking water, but few realize just how many other areas our local government has mismanaged for years and continue to mismanage today.
One of those areas is utilization of the old Page Middle School and bus garage properties, associated construction and use of taxpayer dollars to fund Crony maneuvers and deceptions to vacate the properties. Kiser and the two boards back then began the mismanagement several years before they built new Page Middle School on T.C. Walker Road against the will of a majority of the community. Most people in Gloucester know that story, so we will focus on what is taking place right now. The following is our brief analysis and opinion about what is going on in this area of our local infrastructure.
The current boards, paid for a study to determine where the best place would be, out of three school board owned properties, to build a new bus garage, county garage and utilities department complex. The initial results deemed the old Page and bus garage properties to be the best and most economical option; that is until school board member Charles Records and supervisors John Meyer, Phillip Bazzani and Ashley Chriscoe got done manipulating the results of the study. Just like when Kiser and his corrupt crew were violating the community's trust, this location study was done for no other reason than to check a box in the process of deceiving the people of Gloucester. From here on we will refer to the current group of deceivers collectively as the Crony Four, because they “are”, the definition of Crony Capitalists with Socialist tendencies and have steered this latest ploy against the taxpayers.
The old Page property still has a VDOT approved entrance/exit and was so depicted in the initial study findings. The Crony Four had that changed. They added the made up, so called requirement of obtaining a right of way from adjacent property owner Harry Corr and reconstructing the Route 17, T.C. Walker intersection to the mix. Part of the so-called reconstruction entails leveling the north and southbound lanes of Route 17 in the vicinity of the intersection. This one made up item alone drove the estimated costs up by several million dollars, making it "appear" cost prohibitive to build on the old Page and bus garage properties. That was the goal, but the real picture is likely quite different than it appears. The very expensive Route 17 leveling is most likely a VDOT requirement to build a thoroughfare road for a large business park or residential development, but it is certainly not a requirement for the construction and uses contained in the initial study findings. We strongly believe the old Page property is wanted by an adjacent landowner and the Crony Four and their predecessors (the Kiser Crew) have and are doing everything possible to make sure they get it; no matter how much it costs the taxpayers in the long run.
Once the Crony Four added enough fake requirements and costs to rule out the old Page and bus garage properties, they proceeded with cutting the size of the recommended complex. The first thing they did was remove a new yard and facilities for our public utilities department; further demonstrating both boards lack of concern about our crumbling water and sewer infrastructure, our utilities department employees who are trying to hold it all together while significantly understaffed and ultimately demonstrating their lack of concern about the people of Gloucester.
The Crony Four’s plan is to allow utilities to temporally use the old bus garage and its property until it is needed for “economic development reasons”. They seem to believe, or know, a developer will come along who is willing to pay to relocate Utilities’ operation in return for the old Page and bus garage properties, but if they know this, why don’t they let us know what the ultimate plan for the properties is. We believe it is because the Crony Four are doing all of this to take care of one or more of their friends or associates and Charles Records seems to be at the forefront of the current effort?
Over two years ago, we began to believe Charles Records ran for the school board for the sole purpose of trying to remove ownership of the old Page and Bus Garage properties from the school board. At the end of his four year term on the board, it appears this member of the Crony Four has been successful in doing just that and ironically, he is not seeking re-election this November.
During a joint meeting of the school board and board of supervisors on Sept 19th, County Administrator, Brent Fedors presented a timeline of future actions that includes a completion date for turning the old Page and bus garage properties over to the county. They claim their intent is to turn the old Page property over to Gloucester’s Economic Development Authority, but no information has been provided outlining what the GEDA intends to do with the property. This is troubling; especially since the GEDA already has comparable properties in the Gloucester Business Park that have gone unsold and undeveloped for years. What is so special about the old Page property that justifies the amount of tax dollars and time that have been waisted to obtain it from the school board? Wouldn’t you like to know?

It is not too late to put a stop to what they are doing, but "all" of us must let them know we will not accept what they are doing. Be sure to pass this on to other people in the community.
Look for more from us on how our local government is continuing to waste our tax dollars and allow our infrastructure to crumble in order to satisfy the greed and desires of a few. We will also be providing info on the Gloucester High School master plan in the very near future. If you care about the future of our County and Country; get involved, become informed and speak out. Demand transparency, make the ones we elect answer the hard questions and hold them accountable for their actions.


The following are presentations and meeting video segments pertaining to the latest transportation complex location study:

Trans facility timeline and other bs from Kenneth Hogge Sr

The following is from Gloucester County’s Administrator. It sounds great, but what about keeping the public informed?

Mr. Hogge –
Treatment Process Improvements at the Surface Water Plant have been designed, procured and awarded to address this issue.  We will be converting from chlorination, using liquid chlorine, to chloramination using liquid chlorine and liquid ammonia. The project is currently under construction and we anticipate completion, and process conversion, by the end of 2017.
Brent
J. Brent Fedors
County Administrator
Gloucester County, Virginia
6467 Main Street
Gloucester, VA  23061
(804) 693-4042
bfedors@gloucesterva.info
Here is a link to EPA info on the pros and cons of chloramination:  http://www.mawc.org/sites/default/files/page_attachments/pdf/Chloramine_General_Facts.pdf
Link to original article:  http://www.gloucestercounty-va.com/2017/09/is-gloucester-countys-public-drinking.html
at 11:15 AM No comments: