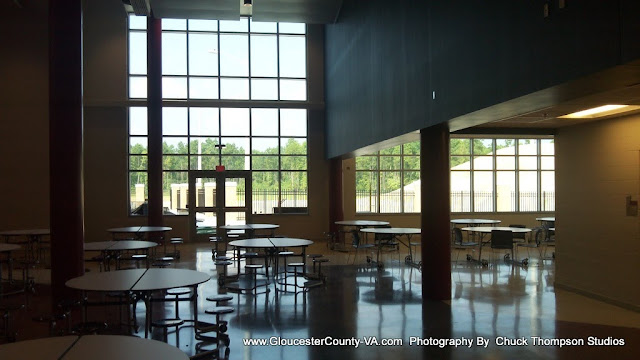 I am not sure if Charles Records was taking responsibility with the above statement but either way I find it funny as all get out and I am going to explain why in this article.  The school was designed backward from everything we are looking at.  Let me explain this in detail here and show some more serious issues because of this backward design.

From what we remember of the information about the design of this school Dr Ben Kiser traveled to Finland where he did some studies of their school designs and was apparently so impressed for some reason he wanted to build the same type of school here.  So what we need to do is actually look at the reason why anyone would want to copy FInland's model, especially when you take into consideration that Finland is a very cold country.  Much colder there than it gets here.  Summers as I understand it get into the 70's.

But there like here, winter months have much shorter days than summer does.  So the objective is to maximize sunlight for several reasons.  One of many reasons for maximizing sunlight is for mental health.  Depression due to a lack of sunlight is a common issue in Finland.  It is not as bad here but has merit all the same.  The other is energy savings.  By maximizing sunlight, you can cut back on heating costs.  Heating is not as expensive as cooling.

So how do you maximize sunlight?  You build your structures with a lot of glass.  You want that glass on the southern side to capture the maximum amount of sunlight as possible throughout the day.  Where is the majority of the glass in Page Middle School?  It's ............ on the northern and eastern side of the building.   It minimizes the amount of sunlight, not maximizes it.  Just like seen in the picture above.  The picture above was taken at about 3:00 PM in the beginning of September the 3rd to be exact.  Now come December through March, where we have the shortest days of the year, this is going to be a dark area instead of filled with light the way they are built in Finland.

In Finland, during the warm months, their structures have canopies or awnings to block excessive sunlight from coming in to minimize their cooling expenses.  Page Middle School lacks these awnings, but since the glass is on the northern side, it does not need them as it is not maximizing the sunlight.  So what we are now doing is trying to heat and cool a structure that maximizes expenses and minimizes savings when it should be doing just the opposite.

When little Johnny and Sally are getting off the buses or on the buses, this is the area with the maximum amount of frozen ground and potential ice problems.  The front of Page which gets the maximum amount of southern sun will be the safest areas to walk.  But that is not where the majority of the students will be coming and going.  The majority will be subject to the worst areas of the property.  This also means that the school board will have to use more chemicals to keep the areas free of ice and snow.  Anyone know what those chemicals do to concrete and asphalt?  It deteriorates them at a very accelerated rate. 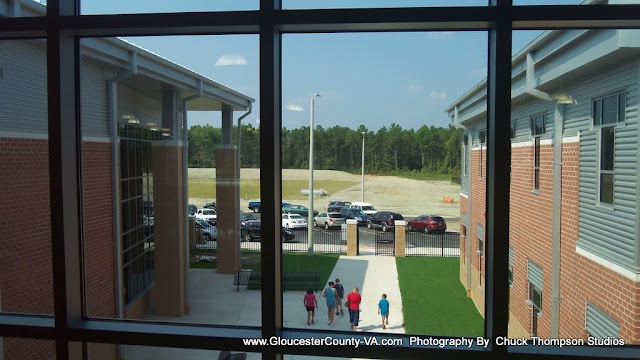 Again as seen in the above picture, the maximum amount of sun is not being produced as the design is backward.  This is the northern side of Page Middle School.  Picture taken from the second floor looking out into one of the courtyards.

During the short months, this will be the shadow view of about 11:00 AM.  The glass on that back north western corner is just not producing any sunlight at all for the open design.  Instead it maximizes cold which maximizes costs and minimizes comfort of the students, teachers, and staff as well as minimizes savings. 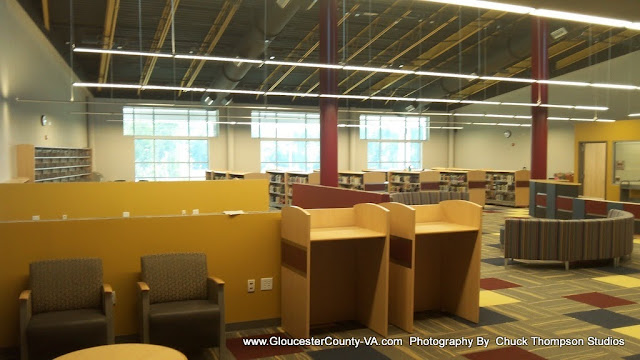 And the lack of a drop ceiling is yet another question as to why anyone would want this?  The purpose of a drop ceiling is to minimize heating and cooling expenses.  Instead we have wide open ceilings that maximizes costs and sacrifices comfort for everyone.  Is it more appealing?  That is up to the individual to consider.

The mantra we keep hearing from the school board is that it is now all water under the bridge and we need to be proud of this new school.  The more we continue to look at it the more we see it as the "THE GREAT MONUMENT TO STUPIDITY."

Now if Charles Records has a reason why the design of the school is the way it is and how it is saving us money instead of costing us more money than it should we would love to hear it and we will be happy to publish it.   To us it looks like it was designed backward which is costing us all a lot more than it should at so many levels.  We look forward to hearing from Charles Records on this or anyone else who has sound reasons for this design.

Let us make one thing very clear.  As far as construction goes we have no issues with what we have seen so far.  From the looks of it, Oyster Point Construction Company, did an outstanding job with the designs they had to work with.  They should be commended for the quality of the work.  We are not questioning any area of the construction.  We are questioning a great deal of the design work.  We do not doubt that safety was taken into consideration as far as implementing the design work.  It's the many areas where the design simply is not appropriate for a Middle School and its students, teachers and staff, or where costs are concerned and we have seen a number of areas where there are, in our opinion, final design flaws that need to be addressed right away with some we have only reported to county authorities.  And with that said, this is why we call Page Middle School, The Great Monument To Stupidity.

We are nowhere near done with our reports on issues we see and keep hearing about regarding Page Middle School.