Obama's Second Term - We Told You This 6 Weeks Ago 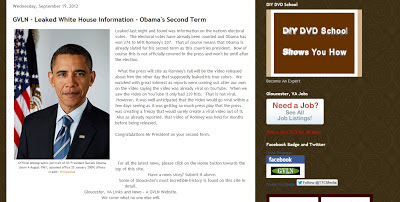 You can click on the image to enlarge it or you can read the September post on this site.  We told you about 6 weeks ago that Obama was going back in for a second term.  This was not a guess.  We saw first hand the secret announcement.  It is always 6 weeks before the election and only for one day.  If you miss the announcement, all you can do is guess.  We told you back in 2007 that Obama was going to be president then.  Again it was 6 weeks before the election and the announcement was only available for one day.  After that, the information disappears forever.  If you catch it, you can make your announcement without it being a guess.  If you read our post you will clearly see we were not making a prediction, we were telling you what was going to happen.

We can do this anywhere with any major election in any country.  It's not a guess.  It's knowing where to look and what to look for and why.  We already know the headlines for 2013 and what the big news is going to be.  Why Obama?  Simple, the Federal Reserve is up for renewal in 2013 and the powers that be know that Obama will not throw a monkey wrench into the renewal process.  As some of you know and understand, the Federal Reserve along with the IRS is a private banking concern that has bankrupted us as well as the rest of the world.  They have everything at stake at making sure their control continues and that you go broke trying to maintain your lifestyle.

Obama will take the hit in the future as the president that sold us out a second time.  The first sell out was back in 1913 when the Federal Reserve began.  The Federal Reserve answers to no one.  Not the people of the US, not the government, not even to those employed by them.  There is no recourse.  There is plenty more but we will cover that on another day.