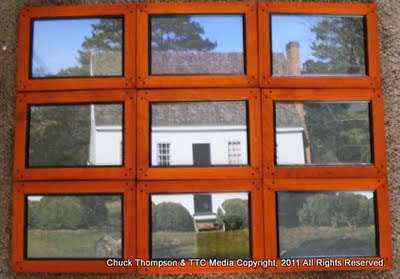 We have developed something rather new and unique. We call them window pane murals. We take an image and split it up using a number of highly specialized programs and then frame the pictures to create one mural. The results give the illusion that you are looking out a window. The above picture is of Walter Reed Birthplace. This is a mini mural that measures about 15x23 inches. We can create panes and murals up to 16 feet by 20 feet with any size picture without loosing any clarity. Imagine putting a window anywhere you want with any view you want. We are developing these for the following markets, museums, hotels/motels, restaurants, businesses, commercial, ad agencies and of course your home when you are ready for something fun and different.
Just e-mail us at the bottom of this site for more details.
at 8:25 PM No comments: 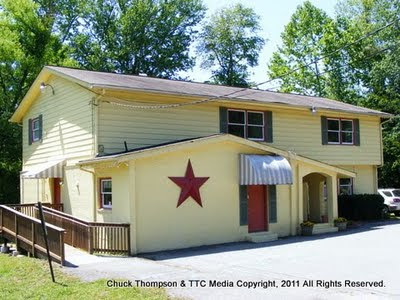 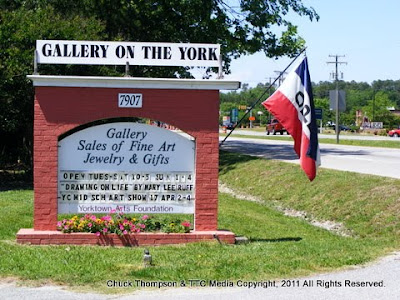 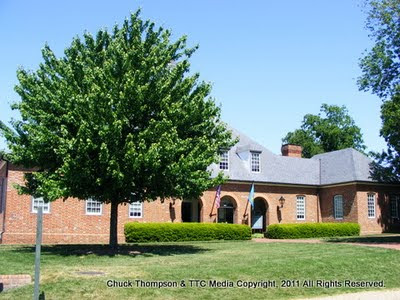 Part of our missions statement has always been that we support the arts and the art of living here at TTC Media. Now we are part of the art community. We have a few pieces of our work in Yorktown at the Yorktown Hall art Gallery and are looking into adding pieces in some of the art shows that the Gallery On The York holds periodically. We are also talking to the fine folks over in Kilmarnock at the art gallery there to include some of our work. We have been shooting pictures for years and we have over 100,000 images that we work with and ever growing. If you have not been to any of these art galleries, we highly recommend them. Only a short distance from here and a great way to spend a day.
at 8:16 PM No comments: 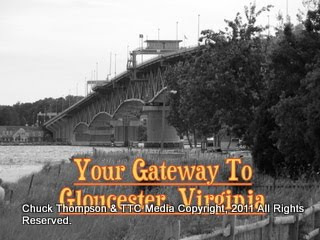 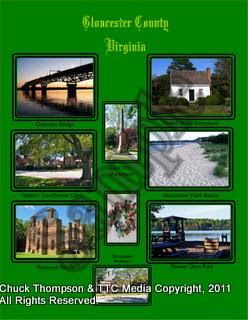 We have designed a new Gloucester County Print and have created a series of Postcards of Gloucester County. The print comes in various sizes from 8x10 matted and framed to 20x30 framed. These are actual photo lab prints for the larger sizes. The smaller sizes are being produced in one of our local studios. The postcards are a total of 20 different cards for series 1 also produced in one of local studios.

No one has stepped up to the plate to create collectibles for travelers and tourists through Gloucester County on any major scale. So we decided to step up and fill that need. Tourists are looking for little things such as postcards or prints that reminds them of their trip through Gloucester. Postcards and prints gives them just what they are looking for. Plus we have developed an entire series of prints of hot spots from around the county that can be proudly displayed in any business or even sold at local businesses. We will soon be traveling throughout the county showing off these new items as well as items under development. These items foster customer loyalty, repeat business and word of mouth future business. Can we afford to turn our backs on that?

Plus we can also custom create or assign from our own archives, specialty postcards and or prints. We are also developing a special art cards collection too. You can e-mail us at the bottom of this site if you would like to know about this sooner than we are able to find you in our travels.
at 7:42 PM No comments:

The Bridal Boutique Here In Gloucester, VA For Sale

Site Update;  September, 2012.  This shop does have a new owner and is not closing.  We have no information on whether the phone number for the shop is the same or different.


After 20 plus years of serving Gloucester County couples, Lily Ridout is ready to retire. This well established bridal shop is now up for sale at a price of $40,000.00 which is less than the inventory is worth. A prime location on route 17 north, George Washington Memorial Highway, the shop is well established in the area and the only shop serving couples soon to be wed. This shop is a steal at the asking price based on the 20 years of good will already established and is turn key and ready for a new owner to just step in and run the business. For more details or information please contact Lily by calling 1-804-642-5157
at 7:30 PM No comments:

Email ThisBlogThis!Share to TwitterShare to FacebookShare to Pinterest
Labels: The Bridal Boutique Here In Gloucester, VA For Sale

During a recent stop along the side of the road to take pictures for a news story on a tornado that devastated Page Middle school here in Gloucester, we encountered a very rude State trooper. It's one thing to move traffic along, it's another thing to demand that someone trying to do a job move now. We were out of the way and off the road of traffic. When we tried to explain to this trooper who we were and why we were there, he had no time to hear it. We were just demanded to move. Now we fully respect the tough jobs these folks do for us day in and day out. We respect the uniform. We DO NOT respect being treated like sheep especially when no emergency was in place and we were NOT blocking traffic and we were trying to do a job. He interfered with freedom of the press. A violation of the bill of rights of this great nation.

There was no courtesy whatsoever. Are we paying tax money to be treated like sheep here in Virginia? To have our rights violated instead of our rights being protected? We continue to see this more and more. We normally do not watch television, but on a recent stint we watched an episode of COPS. On that show were multiple violations of the bill of rights we are born with in this country. Are we so quick these days to surrender our rights or have our rights been usurped? Have we become the USSof A? (United Socialist States of America). When do we say stop? Enough is enough? How are our police forces being trained these days? We really want to know and we want to film it and show the world. So if we are treated with great disrespect, what is going to happen if we are in real trouble and need to call on our police? Do we question the idea? In court we are told we can not take the law into our own hands. On the streets we are shown that we can not count on those sworn to protect and serve? Where is justice? Have the state police come to the level of Judge Dread? We should hope that this is not the case. We rarely have issues or dealings with the police at any level. We live quite lives overall. So making assumptions based on limited exposure is not 100% fair, but this story based on unfair treatment still needs to be posted.

We are NOT seeking an apology nor would we ever dream that one would be forthcoming. We just expect more respect from those out there that are in place to serve us, not command us like sheep. Enough said.
at 7:15 PM No comments:

Kodak states that they offer the lowest printer ink replacement costs in the industry. Well that has become a slight of hand move at this point as their costs on ink have risen considerably over the past 6 months and continues to rise on a regular basis. Yes the cost of their ink is still slightly lower than their main competitor, HP, but only by a couple of dollars. Why we say that it's slight of hand is because you can buy a comparable HP printer that will produce better quality prints for much less money than a Kodak. The cost difference more than offsets the difference in ink costs between the two companies. We have been using Kodak printers for the past three years exclusively. Prior to that, we used mainly HP printers and have used printers from all of the manufacturers with the exception of Brother. HP has always won our picture print wars in the most stringent tests even comparing their prints to Kodak and Fuji photo labs. HP has either won or tide against Fuji photo labs but always beat everyone else. (We still maintain all our prints from our public tests). We have never found Epson to win any test and Canon is a great competitor but their costs are still to high and we do not like their deceiving Green advertising.

Grant you, we have real issues with Kodak, we have had very bad experiences with their customer service and consider it worthless. We like their top end point and shoot camera's but find the competition to produce better products. We still own Kodak's first printer made for the recent industry wars but it no longer works that well. We are actually on our third printer from Kodak and the quality overall is average. The prints are outstanding, it's the durability that comes into play. We still have numerous HP printers that still work as well as the day we bought them 5 years ago. As you can see, we are unable to say this about Kodak printers. Our next printer? Sorry Kodak, we are back to HP. Our next top end point and shoot? Canon is the clear winner for us. Even in the camera wars, at some point we have owned them all. Our choices are Canon, Fuji and Nikon. We will give Sony camera's their due, but they do not lend themselves to what we demand. Just about all cameras are made in China except Canon. At least the top end Canon's are still made in Japan with top notch manufacturing that you can count on.
at 7:13 PM No comments: