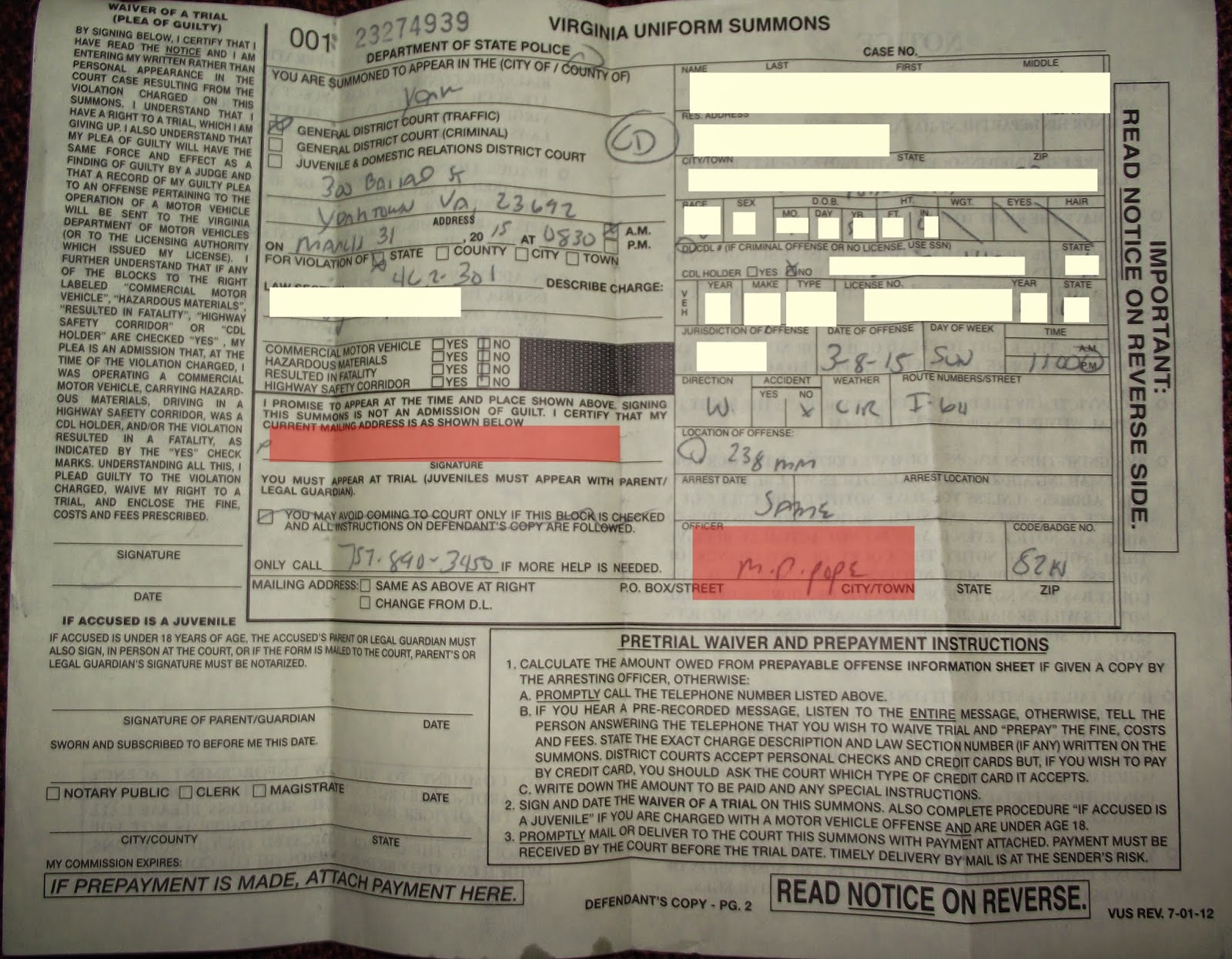 RULES OF SUPREME COURT OF VIRGINIA
PART THREE A
CRIMINAL PRACTICE AND PROCEDURE
Rule 3A:4. Arrest Warrant or Summons.

(a) Issuance. More than one warrant or summons may issue on the same complaint. A warrant may be issued by a judicial officer if the accused fails to appear in response to a summons.

(b) Form of Summons. A summons, whether issued by a magistrate or a law-enforcement officer, shall command the accused to appear at a stated time and place before a court of appropriate jurisdiction in the county, city or town in which the summons is issued. It shall (i) state the name of the accused or, if his name is unknown, set forth a description by which he can be identified with reasonable certainty, (ii) describe the offense charged and state whether the offense is a violation of state, county, city or town law, and (iii) be signed by the magistrate or the law-enforcement office, as the case may be.

(Legal definition of an officer:  An individual with the responsibility of performing the duties and functions of an office, that is a duty or charge, a position of trust, or a right to exercise a public or private employment. - Why we are adding this:  arguments can be made about the phrase in the yellow highlighted area saying that the officer is NOT required to sign the ticket.  As you can see, yes he is when you know what the term officer means.  My opinion though.)

Above is one of many traffic tickets that has come across my desk.  The above ticket is not properly executed by the trooper who issued it and that makes the ticket invalid.  Problem is, getting the judge to recognize such and having the judge throw the ticket out.  Anyone have any idea how much the courts pull in each week through these bogus scams called traffic infractions?  Go sit in one of these courts one day and watch how many people go up to the bench before the judge and just give their money away as well as their rights and freedoms.

I have sat through plenty of these just to watch in horror how many people are doing what I just described.  No one wants to fight the system that is robbing you blind.  Now lets take a really good look at this.  Just under the picture of the illegal traffic ticket are the rules of the court.  Now these rules are for criminal practice and procedure, exactly what a traffic ticket falls under.  Please note very carefully, RULE   3A:4 (b) (iii) clearly shows that the trooper or law enforcement must sign the summons.  I have at least 8 that have come across my desk in the last few weeks where not one have been signed by the trooper or law enforcement officer and they are from 4 different people.

Look at the light red highlighted area where the trooper, M B Pope put his name.  That is not his signature.  I have a copy of his signature on file.  That makes this summons invalid.  That is just one area.  Also, a common ploy that law enforcement uses is they pull your copy out before you sign their copy and they then hand you your copy after you have signed theirs.  They count on you thinking that since the summons does not have your name on it, you do not have to show up.  Automatic ruling against you if you do not show up in court and a higher fee for the court.

When law enforcement does not sign the summons it is a due process violation.  You have to argue the exact rule above with the judge.  If the judge rules against you anyway, you want to make sure you get that judge recused for failing to uphold the canons of judicial procedure that the judge is bound by.

You also want to know where the Commonwealth's independent witness is against you in order to have the 4 legs of the table up for a proper case against you in a criminal traffic ticket.  If the Commonwealth does not have one?  They do not have a proper case against you.  But most of you have no clue about this and need a very serious education about your real rights.  Again, I have watched hundreds of people march up and just give the courts their money not even realizing the court had no case against them and your insurance goes through the roof causing you a great deal of financial harm.

Hey here is a wonderful idea: spend a fortune and get an attorney who will sell you down the river.  We have seen this at least a dozen times in the past several months.  You do not end up much better off on the traffic charge, but at least you can rest assured, your attorney is happy because now he has your money in his pocket.   There were a couple of times we were asking questions as to what side the attorney was on when he was supposed to be defending his client.  If that was defense in a few of the cases we saw then run like hell in the other direction if you are thinking of hiring an attorney for traffic court.

What we learned sitting in the court rooms?  The courts are nothing but banks.  You can only make deposits though.  Withdrawing money?  Not allowed.  Try and argue your case?  The judge is going to protect the law enforcement officer just about every time even though there is no valid case.  In order for a case to be valid there must be 4 legs to the case.  Two opposing parties are the first two legs.  Subject matter is third and forth is an independent witness.  The law enforcement officer who charges you is NOT an independent witness.  He or she is a pre-prejudiced party to the charge.

Now lets get into one of the secrets of the courts.  You have to read the canons of judicial procedure that judges are bound by in order to understand why most people do not succeed in court.  A judge must not independently investigate facts in a case and must consider only the evidence presented.      The highlighted area here comes from Canon 3.  So what you are being told here is that the judge can not use his or her own knowledge of law to help you win your case.  You must present the proper argument before the judge in order to win.  This is huge folks.  If you fail to understand this you are in trouble.  The judge knows the law very well but you are being told here that even if the judge knows you should not be found guilty of whatever charge or claim the judge can not rule in your favor unless and or until you provide the proper argument.

So if you are trying to fight an illegal traffic ticket or whatever else your case may be unless you are presenting the facts and the law you are going to be ruled against.  THE JUDGE CAN ONLY CONSIDER THE EVIDENCE PRESENTED.  Most people convict themselves.  If you think you have done something wrong then you are going to do something to convict yourself in just about every case.

Let's look at a new ticket that just came in today.  Here is the charge:

The driver was pulled over by law enforcement for no apparent reason and the above is the statute he was charged with.  The trooper did not sign the summons and pulled the usual trick of holding the copy of the summons out from the original so that the defendant's signature does not appear on his copy.

But lets look at the statute that is a so called violation.  All drivers of vehicles shall obey:  wait and hold that concept right there.  Shall?  Anyone know what the definition of "SHALL" is?  It does not matter that the word is common, the word has at least 3 different meanings.  Shall can mean sometime in the future.  So sometime in the future anyone driving a vehicle will obey?  May obey?  Must obey?  Consider obeying?  What does shall mean here?  Legal codes and statutes that use ambiguous wording is not law.  Its garbage.  Look at the above statute very closely.  Read it numerous times.  The commissioner of highways "MAY"?  now what does may mean?  Must?  Can?  Will?  Might?  What are they really trying to convey here?  Now what are lawfully erected traffic control devices?  Toasters?  Radios?  Light poles?  You are only assuming you know what they are.  You convict yourself when you assume.

Now lets dig a little deeper.  "Such system of traffic control devices shall correlate with and, so far as possible, conform to the system adopted in other states."  I'm sorry, but so far as possible, I shall, at sometime in the future, consider obeying some form of a traffic control device that may be put up by the commissioner of highways.  Court over.  Charges nullified.

Oh, and one more thing, if you do get a summons, you have been arrested and charged but you were released on your own recognizance.  Were you read your Miranda Rights?  No?  Why not?  That law enforcement officer is going to testify against you.  Can anyone say judge Dredd?  Roadside court?

All of the above are observations and research over the past several months.  None of this is legal advice in any form.  If you need legal advice, spend a ton of money on an attorney, and good luck as you are going to need it.  These are only my own opinion and that of a number of others.   I recommend everyone do their own research and learn as much as possible so you are no longer being made the bank to enrich the courts.  If everyone would fight against the so called charges, the courts would collapse and crumble into dust under the weight.