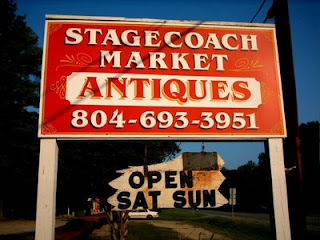 The Stagecoach Market is celebrating it's 20th birthday this year. This Antique village, flea market and farmers market was opened to the public back in 1978. A family owned business since the beginning and still run by the same family, this is a fun place to browse around in and find some really great bargains and hard to find items. An antique lovers dream is found here as there are plenty of antique shops with all kinds of finds.


Looking for out of print movies? This is a great place to look as the selection here is one of the best. The link to the Stagecoach market is right at the beginning of this post, just click on the name Stagecoach Market above and you will be taken right to that website. There you will get a much better idea of what kind of items and deal you can find at the Stagecoach. This is one of our featured sites and there is also a link on the bottom of this page to the site. Happy Shopping.

Gloucester, VA Links and News.  GVLN Website.
at 2:44 AM No comments:


Tyndall's Point, aka Gloucester Point, was originally named after map maker Robert Tyndall in 1608. Mr Tyndall was exploring the lands of Virginia with Christopher Newport and John Smith. The area quickly became a hot bed for tobacco plantations and a warehouse was built on the point to serve planters shipping their crops back to England. In 1667, the first fort was built to defend against any possible invasion from the Dutch fleet.

This was an important area during both the American Revolution and the Civil War. The Earthworks, also known as readouts, are all man made defenses from those periods. Tyndall's Point park is a great example of modern warfare, but the biggest secret of this park remains buried in the woods covered with overgrowth. The best of the earthworks are rather dangerous and the parks department would prefer you stay out of that area and not know about it. The ending pictures on this slide show reveal the best areas, but they are not easily accessible and we do not recommend you try to go into them. They are dangerous as there are sudden unseen drops that are very deep. I tried to take a few pictures of them, but the overgrowth is so thick, none of them came out where you could tell what they were. Plus moving around that area was extremely rough and very hazardous.

TV 48 This is just to cool to not link. The Gloucester Government TV Channel 48 site. If you are on high speed Internet, you can stream this channel over your computer. Check it out. We just tested the site using the Firefox browser and it did not work. The site recommends using Internet Explorer. We will give you an update soon on how well the site works using IE.

Update, because Gloucester, VA Gov uses Silver Light for it's videos, porting them over does not work very well with alternative browsers or Linux site servers.  We have had a number of problems with their videos.  Gloucester, VA Links and News.  GVLN Website.

Battle Of The Hook

Battle Of The Hook We highly recommend this site as one to visit for a major upcoming event. Billed as the nation's largest Revolutionary War Reenactment, this is a can not miss event. We have this on our calender of events that we will be posting as much as possible about after the event. One of the sponsors of this event is the Stagecoach Market a local Antique, flea and farmers market. Another site that we highly recommend that you visit. In the event you have no idea of what to expect at this market, please visit the site by clicking on the above link.

The owners took down the main Battle of the Hook site a few months after the event.  In fact, most web sites that contained information about the battle are long gone.  You Tube has plenty of videos from the event including our own.  We have our own Battle of the Hook site up and the link is at the top of the page and on the right hand side bar.  Gloucester, VA Links and News.  GVLN Website.
at 12:32 PM No comments:

Gloucester News Here is an incredible news website just found. Between the Gloucester - Mathews Gazette Journal and this site, you will have the full perspective of all the local news going on in this area. Looks like we will be a regular user of this site ourselves. Very clean and well done.  Topix is the name of the news site.  They have some crazy posts from many local people.  Some fights are found here.  This is not an actual local site.  It's part of a national site with local feeds. 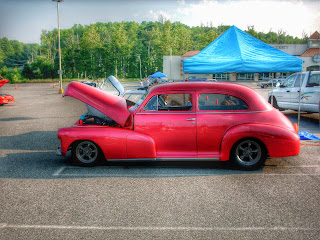 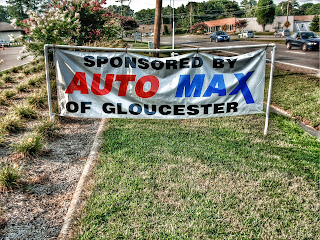 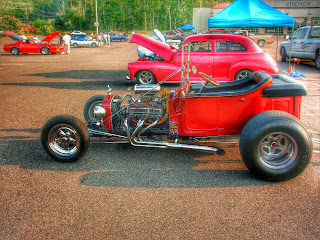 Every weekend there is an antique car show here in Gloucester. It's in the parking lot where the main Library is on Main Street, across from the DAV thrift shop. Everyone is welcome and there are no fees to see the vehicles. There is only a very small fee to enter in your own antique or classic car into the show. It's a fun time. I will be putting together a slide show very soon of one of these shows so you can get a much better idea of what a great event this is each week. I'll also have more details on the next posting.

Some really cool antique cars can be found on display here.  Restaurants are located in the plaza here so if you do get hungry, it's a non issue.  Gloucester, VA Links and News.  GVLN Website.

Gloucester - Mathews Gazette- Journal Here is the link to one of our local newspapers. I have met a number of the people who work at this paper and let me say, this is one of the nicest group of folks I have ever dealt with. Very polite and professional and a real joy to work with. I can't say enough nice things about them. They produce a great paper for the community and this link is to their on line version. Please give them a visit.

Update, the site is mostly a paid subscription site.  Don't know if it's really worth it.  I'd rather subscribe to the paper myself.  Even still, it's one of the best local papers we have ever seen for any community.  Gloucester, VA Links and News.  GVLN Website.


We decided to kick this site off with a slide show from the Gloucester County Fair that just ended Sunday, August 17th, 2008. 315 pictures total. We tried to capture as much of the fair as possible. It was a good time for the entire family. We will be covering as many events in the area as we can from this point forward, bringing you advanced information and news along with coverage of after the events and as many pictures as possible and when we can, we will even do video clips. Hope you enjoy this show, it's a long one.