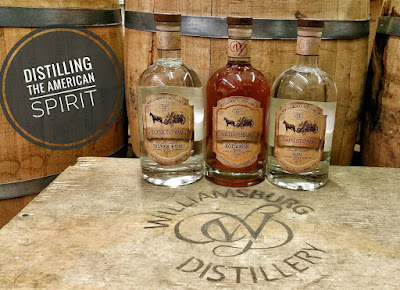 The majority of the employees were up in Baltimore this past week to receive those awards.  Normally GVLN reports on Gloucester news so one may be asking why we are covering news in Williamsburg?  Simple, everyone who works at the Williamsburg Distillery are residents of Gloucester.

The whiskey base used for creating the multi gold award winning Gin is an American wheat based whiskey.  Ninety Five percent of whiskey's on the market are rye based whiskies.  Only five percent of American whiskey is wheat based which is a milder whiskey flavor profile.  For those of you who love Gin, most Gin you are familiar with is a vodka or pure ethanol based spirit.  The spirit itself has no flavor.  Only the botanical's put the flavor into most of the Gins on the market.  One of the secrets of the Williamsburg Distillery is this, Dr Bill Dodson wanted to stick with grains of the period, well, yellow corn was not one of the grains of the period, Indian corn was. Indian corn has no commercial use anymore except during Thanksgiving with the Indian Corn being used for decoration.  Dr Dodson and his staff worked out contracts with local farmers to supply Indian Corn exclusively for the Distillery.

The results are numerous gold medals now won by the distillery with the top award being a triple gold won last year for the Jamestown Gin that was won at the Denver International Spirits Competition.  The distillery has also won  numerous gold medals for their rum with 91 points given at the Los Angles International Spirits Competition.  This is a distillery to watch and without question, worth your time to visit and buy some spirits while you are there.
at 5:15 PM No comments:

Gloucester Fire and Rescue Chiefs Push Back On Budget Cuts

The following video is of the FY18 budget conversation between the Chiefs of our Abingdon and Gloucester Volunteer Fire and Rescue Departments and our Board of Supervisors that took place during the April 4th Board of Supervisors meeting. We have to say, it was very refreshing to hear others push back on the sustained pattern of our local government and Boards of Supervisors neglecting our vital infrastructure. The current Board collectively is no different than previous Boards. A few names and faces have changed, but like all previous Boards, this one does not mind wasting tax money on ludicrous things like renting our libraries and health department spaces instead of owning them or handing out free money to high risk businesses located primarily on Main Street. And we can't forget the great consolidation deception that has played out over the last three years. We have published numerous articles on key areas of tax dollar waste and on various parts of our neglected infrastructure. Now we sadly add our Volunteer Fire and Rescue services to the list.

Maybe our Supervisors and should visit our Volunteer Fire and Rescue facilities and learn first hand how complex and critical these services are. They should sit down with the Chiefs and other volunteers and actually become familiar with their operating and capital budgets. They should become familiar with their long range plans. They should do all of this before they ever again ask our Volunteer Fire and Rescue Departments to get by with less money with the empty promise of maybe being able to give them more the next year. Their credit approach is no longer any good because the cans they and other Boards and Administrators have kicked down the road are getting weaker and weaker and the roads are getting shorter and shorter.

We have provided our Supervisor’s email addresses below the video. Let them know we support our Volunteer Fire and Rescue people and operations and expect them to do the same. Lord knows the County throws plenty money away every year, they can surely fund these critical services fully with some of it.

Email ThisBlogThis!Share to TwitterShare to FacebookShare to Pinterest
Labels: Draining the Swamp, Gloucester and Abingdon Volunteer Fire and Rescue. Gloucester Board of Supervisors, neglected infrastructure

Request To Expand Body Cam Use In Gloucester County, Virginia


Body cams are rapidly becoming the norm in American police departments because of their probative value in documenting encounters between law enforcement and the citizenry. They are also increasingly being used by other government employees like Animal Control officers and codes, building, storm water management and other such inspectors. Sometimes animal owners, property owners, contractors and others aren’t very happy when issued code violations. Sometimes animal officers, inspectors and other such public servants are over zealous in the performance of their duties. Body Cameras are a good way to promote integrity on both sides of public service transactions and the most reliable way to document contentious situations. Body cams are also a good way for leadership to insure employees are properly doing their jobs and acting accordingly when they encounter people in the community.

Since the deployment of body cams by our Sheriff’s Department, we have learned the $300 to $1,000 cost per camera is not the only costs associated with using body cams. There are camera repair and replacement costs, data storage costs and costs for the labor intensive processes of viewing, processing and logging hours of video. Available data suggests these costs can equate to between $1,500 and $4,500 per camera per year, but also suggests these costs will likely drop as more localities implement body cam use. Despite the costs, body cams enjoy very strong public support, with 88 percent of those surveyed in an Economist/YouGov poll backing their use.

Considering  was fortunate enough to have the Sheriff’s department body cams donated and has already invested funds in data storage and processing labor, it only makes sense to take the next step by outfitting our Animal Control officers with body cams. Doing so will enhance the County Administrator’s management of Animal Control officers, enable them to know where their vehicles are and actually see what the officers are doing while they are out in the community. Animal control has already established a history of making separate audio and video recordings of encounters with citizens, but such recordings have only commenced and ended at the pleasure, convenience and whim of the Animal Control officers. Why not take the next step by combining the two recordings in a continuous format that will level the playing field between the officers and the citizens? Outfitting Animal Control officers with body cams will also provide far more clarity of what actually takes place from the beginning to the end of officer and citizen encounters.

What is your opinion?