How can the State of Virginia out prosper the rest of the nation?  It's very simple.  The video above is about nullification.  Our Federal Government has grown to big and to powerful for the good of the people.  The states can do something about it.  The Federal Reserve system is a private banking concern that produced paper script backed by nothing.  The federal reserve also has a large presence in Richmond, Virginia so it would make it hard to fight, but our leaders of this great state could declare the Federal Reserve null and void based on Constitutional law and then proceed to produce a state currency that is actually backed by something of value.  Once one state starts the ball rolling, other states will follow.  It's not script that is the problem, that's paper money for those who have no idea what script is.  Paper money that is backed by nothing means nothing.

If you view American History, every state used to create it's own script.  Script or paper money that was backed by a deposit of something valuable like Gold and Silver.  The Gold standard was removed in the USA back in the 1930's after the Federal Reserve grabbed it all for the payment of debt it said the Federal Government owed it.  Hence the first great depression.  Then in 1965 we dropped the silver standard in our coinage.  Again the Federal Reserve took all our silver in partial payment of the debt we owed to a private bank that does nothing more than print paper money.

The real kicker.  All the Gold and Silver that used to belong to the USA is no longer there and has not been.  Private citizens have been allowed to buy gold and silver that was once theirs anyway, at an increased cost.  But nothing backs the USA dollar.  Nothing.  What is the good faith and credit of the citizens of the USA mean really.  No one has ever been able to explain that to us logically.  Illogically yes, but logically?  No.  End the Federal Reserve at least in this state and you will have a state well on the way to being a world leader in everything and everyone wanting to do business here as well as live here because there will be true value here.  And this is only scratching the surface of what the state is capable of doing if it really looks at the nullification process.  The majority of power of the USA belongs to the states, not the Federal Government. 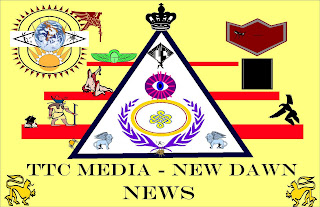 We have been trying to figure out exactly what the Thrive movement's real agenda is for some time and of course we broke their code.  What could be the purpose of having an alien agenda?  If you watch the Thrive documentary, it is well done and a great deal of money went into the making of the video as well as the web site itself for the Thrive Movement.

http://www.thrivemovement.com/  This is the link to the main site.  Foster Gamble of Proctor and Gamble fortune claims that he has taken a different path from the family business that is cloaked in world conspiracy scandalous and for good reasons we might add.  It's proctor and Gamble that have produced the RFID chip and also the implants of RFID chips for animals and next for human kind.  Many in the military already have RFID implants and are not even aware of it.  Yes we know how insane that sounds.

Well here is your insane concept turned upside down.  It is very real.  So we kept asking ourselves, what is the reason Foster Gamble could possibly have for producing this documentary.  Again, we liked most of it and it does reveal all kinds of government and big business corruption around the world.  Foster is part of it however.  For one thing, we have never believed in aliens and are not about to start believing in them now.  So what is the alien agenda?  Well we do believe in demons.  We believe that the entire alien agenda concept is actually the introduction for demons posing as aliens.  Again, think we are crazy?  Take a look here.

Not so crazy now is it.  Foster is a part of the NWO or New World Order and is introducing the second phase of the ultimate plan.  Objective?  Destroy all religion except for Satanism.  This is how the plan works.  The present objective is to continue the escalations of war around the globe.  Those wars are to look like they are religious in their basis.  Decimate entire sections of the world.  Then aliens are supposed to be brought in and to help us stop all the wars and help us achieve world peace.  Then they are supposed to tell us that they are the ones who made us from their own DNA.  This now puts all religions in question.  How can anyone believe in God?  Aliens made us so there can not be a God right?  That's the concept.  They are to promise us free energy and God like abilities that of course they can never deliver.

This is an incredible amount of information to take in.  We realize that.  But how can we say this about Foster Gamble and his wife?  They both seem so genuine and likable.  Yes they do and that is exactly why they have been picked to head this.  Whether you know it or not and whether you realize it or not.  You have been bowing before the alter of Satanism most if not all of your life.  It's in every part of society and you are not even aware of it.  The symbols are all around you and the codec implanted everywhere.  You can not pick up a book, a magazine, turn on the TV, the radio, go into any store, play a game or anything else you take for granted without being indoctrinated into Satanism in one form or another.

It's even in the emblem of your vehicle in nearly every case.  Now how soon is the coming agenda?  2025.  Until then the Earth is to be ravaged with more war, oppression, famine and crime until nearly everyone is beaten down.  Then the new agenda will be so overwhelmingly welcomed by everyone.  Demons, hence aliens will become your new master.  This is the ultimate goal for total control.  You are being prepared.  Now you know why there is so much alien media going on all around you.  Did you really think it was for entertainment?

So what does David Ike and Foster Gamble have in common?  More than you can imagine.  Watch this video and you will then have just about all your answers.  The Thrive movement is not going to go away.  It may change.  But it is very important to the NWO.  It's going to grow and will not be stopped by negative press or posts on the Internet.