Gloucester, Virginia Animal Control Law Section 3-15 now under national scrutiny.  We have been questioning the legality of Gloucester County Animal Control Law Section 3-15 asking if this is even a law.  We said that we would be creating a national survey and asking some of the finest legal minds in the US whether it is or not.  That survey has now been launched into a national campaign.  The following is the survey with section 3-15 fully inserted along with the corresponding VA Law section 3.2-6500 added.  The survey has no copy rights and can be printed, posted and sent by anyone to any legal professional for their answers to this question.  We are not attorneys and only an attorney can legally advise anyone along these lines.  What we are after though is whether legal professionals could even consider any of this a law.

We will be publishing answers to this survey periodically.

Citizens of Gloucester, Virginia are calling for the immediate termination of circuit court clerk, Gloria Owens for violations to the Commonwealth of Virginia Constitution, article 1 section 10, General Warrants of Search or Seizure Prohibited:  That general warrants, whereby an officer or messenger may be commanded to search suspected places without evidence of a fact committed, or to seize any person or persons not named, or whose offense is not particularly described and supported by evidence, are grievous and oppressive, and ought not to be granted. http://law.justia.com/constitution/virginia/constitution.html#1S10  This is a link to the site where the Commonwealth of Virginia Code is located.  And violations to 19.2-56 as well as the possibility of impersonating a judge on a legal document. 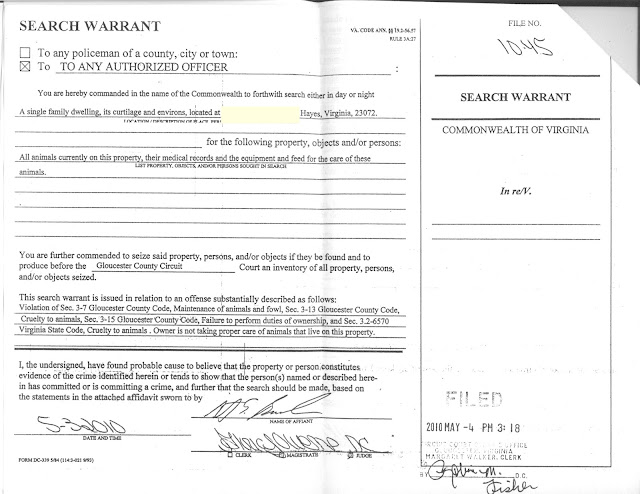 That the above Search Warrant written by one Gloria Owens is in direct violation of the above Commonwealth of Virginia Constitutional law as a request for the search and or seizure of any and all animals had no founding basis and is a direct violation of said above Virginia law.  That said 3rd party complaint did not justify such a wide open search and or inspection hence rendering said warrant null and void and in violation of both the State of Virginia Constitution and the Federal Constitution regarding Search Warrants as well as a direct violation to Virginia law 19.2-56.  And as one can see above, Gloria Owens marked the box under her signature as a judge which she is not, giving the appearance that she mis-represented herself on this legal document.

§ 3.2-6568. Power of search for violations of statutes against cruelty to animals
When a sworn complaint is made to any proper authority by any animal control officer, humane investigator, law-enforcement officer or State Veterinarian's representative that the complainant believes and has reasonable cause to believe that the laws in relation to cruelty to animals have been, are being, or are about to be violated in any particular building or place, such authority, if satisfied that there is reasonable cause for such belief, shall issue a warrant authorizing any sheriff, deputy sheriff or police officer, to search the building or place.

That upon any state representative and or law enforcement investigator whom views the above warrant in it's entirety will find that a third party complaint, that was not reliable under the terms of unconstitutional searches, was a first complaint that would only cause an investigation under 3.2-6568.  That the above 3rd party complaint was for pets inside the owners main dwelling as evidenced by Gloucester County's own records and attached to this Warrant.

A freedom of information request is being pursued to determine if in fact one Gloria Owens acted on her own or if either a magistrate and or judge was contacted,where and or that permitted this violation, where further requests for termination will be called for against said person(s).


Code of Virginia - Title 19.2 Criminal Procedure - Section 19.2-56 To whom search warrant directed; what it shall command; warrant to show date and time of issuance; ...

Legal Research Home > Virginia Lawyer
§ 19.2-56. To whom search warrant directed; what it shall command; warrant to show date and time of issuance; ...

The judge, magistrate or other official authorized to issue criminal warrants, shall issue a search warrant if he finds from the facts or circumstances recited in the affidavit that there is probable cause for the issuance thereof.

Every search warrant shall be directed to (i) the sheriff, sergeant, or any policeman of the county, city or town in which the place to be searched is located, (ii) any law-enforcement officer or agent employed by the Commonwealth and vested with the powers of sheriffs and police, or (iii) jointly to any such sheriff, sergeant, policeman or law-enforcement officer or agent and an agent, special agent or officer of the Federal Bureau of Investigation, the Bureau of Alcohol, Tobacco and Firearms of the United States Treasury, the United States Naval Criminal Investigative Service, the United States Department of Homeland Security, any inspector, law-enforcement official or police personnel of the United States Postal Inspection Service, or the Drug Enforcement Administration. The warrant shall (i) name the affiant, (ii) recite the offense in relation to which the search is to be made, (iii) name or describe the place to be searched, (iv) describe the property or person to be searched for, and (v) recite that the magistrate has found probable cause to believe that the property or person constitutes evidence of a crime (identified in the warrant) or tends to show that a person (named or described therein) has committed or is committing a crime.

The warrant shall command that the place be forthwith searched, either in day or night, and that the objects or persons described in the warrant, if found there, be seized. An inventory shall be produced before a court having jurisdiction of the offense in relation to which the warrant was issued as provided in § 19.2-57.

The judge, magistrate, or other official authorized to issue criminal warrants shall attach a copy of the affidavit required by § 19.2-54, which shall become a part of the search warrant and served therewith. However, this provision shall not be applicable in any case in which the affidavit is made by means of a voice or videotape recording or where the affidavit has been sealed pursuant to § 19.2-54.

Any search warrant not executed within 15 days after issuance thereof shall be returned to, and voided by, the officer who issued such search warrant.

That the above Virginia law has been violated and upon a previous freedom of information request, Gloucester County officials failed to provide proof and or evidence of the date and time of issuance of the above Search Warrant.

Legal Research Home > Virginia Lawyer
§ 19.2-54. Affidavit preliminary to issuance of search warrant; general search warrant prohibited; effect of f...
No search warrant shall be issued until there is filed with the officer authorized to issue the same an affidavit of some person reasonably describing the place, thing, or person to be searched, the things or persons to be searched for thereunder, alleging briefly material facts, constituting the probable cause for the issuance of such warrant and alleging substantially the offense in relation to which such search is to be made and that the object, thing, or person searched for constitutes evidence of the commission of such offense. The affidavit may be filed by electronically transmitted facsimile process. Such affidavit shall be certified by the officer who issues such warrant and delivered in person, mailed by certified mail, return receipt requested, or delivered by electronically transmitted facsimile process by such officer or his designee or agent to the clerk of the circuit court of the county or city wherein the search is made, with a copy of the affidavit also being delivered to the clerk of the circuit court of the county or city where the warrant is issued, if in a different county or city, within seven days after the issuance of such warrant and shall by such clerks be preserved as a record and shall at all times be subject to inspection by the public; however such affidavit may be temporarily sealed by the appropriate court upon application of the attorney for the Commonwealth for good cause shown in an ex parte hearing. Any individual arrested and claiming to be aggrieved by such search and seizure or any person who claims to be entitled to lawful possession of such property seized may move the appropriate court for the unsealing of such affidavit, and the burden of proof with respect to continued sealing shall be upon the Commonwealth. Each such clerk shall maintain an index of all such affidavits filed in his office in order to facilitate inspection. No such warrant shall be issued on an affidavit omitting such essentials, and no general warrant for the search of a house, place, compartment, vehicle or baggage shall be issued.

The term "affidavit" as used in this section, means statements made under oath or affirmation and preserved verbatim.

Failure of the officer issuing such warrant to file the required affidavit shall not invalidate any search made under the warrant unless such failure shall continue for a period of 30 days. If the affidavit is filed prior to the expiration of the 30-day period, nevertheless, evidence obtained in any such search shall not be admissible until a reasonable time after the filing of the required affidavit.


That the above listed Search Warrant is in violation to 19.2-54 as listed here on this page.  Gloucester County, Virginia citizens can not afford and will not tolerate criminals to be employed in this county and are requesting full termination of the employment of one Gloria Owens immediately based on the above complaint.  This complaint has been sent to the Gloucester County, Virginia board of Supervisors as well as the county Administrator for action.