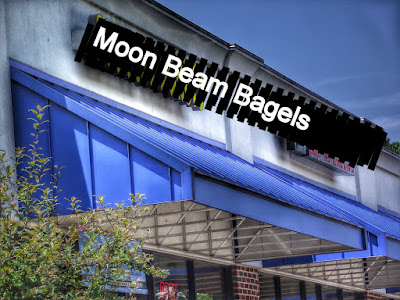 Tales from the Camp Fire
This is a fictional story for your reading enjoyment
This is the story of Moon Beam Bagels
Once upon a time there was a local civil servant named Dogwood that worked in a local office for the director answering phone calls and directing people to the correct office.  Dogwood was very unhappy with his job and everyone knew it. Dogwood's boss had a problem that Dogwood could help with.  They schemed and found a way to make Dogwood’s boss happy and Dogwood would get a fake injury and collect workers comp to be able to leave his job and open his own business “Moon Beam Bagels” where he could be his own boss and not have to answer the phone any more.
Dogwood found a vacant building in midtown and opened Moon Beam Bagels. Dogwood did not think everything through.  He was able to buy a Bagel machine that could make 50 bagels an hour and work four hours in a day and try as he might he was not able to make enough bagels to pay the rent and the staff and buy supplies.  Dogwood worried about this until he was offered a deal he could not refuse. We like your bagel business and we will give you money for you to claim as income to keep Moon Beam Bagels open you just have to make us silent partners and hire who we tell you to.  But I can only make 50 bagels an hour for four hours a day and this cannot be increased.  Not a problem just do as we instruct.  So Dogwood took the money added more space in the shop making it three times larger.  Hiring the extra staff not to work and kept on making bagels. The money kept on coming in and Dogwood was happy.  Dogwood even tried to expand the business to a new site.  If I can sell my 200 bagels faster each day I will not have to stay open but during the morning.
Did I mention Dogwood was not a good business man and had no experience in a commercial kitchen?  He was posting pictures on Face Book that showed that he did not understand the importance of using the right kitchen tools and keeping everything clean.  Someone shared this information with the Health Department.  Dogwood’s friend when dropping off some cash told Dogwood about the inspection. Dogwood closed Moon Beam Bagels on a holiday weekend to clean the shop so it would be spic and span for the inspection on Tuesday.  The inspection was done and Moon Beam Bagels passed with flying colors, with instructions to remove the pictures from the web site and to be careful what he posted in the future.
The last time the person telling the story around the camp fire was in the store the floors were dirty,  the place was understaffed, the bagels?  Okay at best.  The argument was given that they were busy and it was hard to keep the floors clean.  The response “I was the first customer of the day.”  There were no replies.
I hope you enjoyed this work of fiction.  If it reminds of any business in Gloucester, VA it is just a coincidence since this story is made up?
Sincerely,
Alexander James Jay
at 7:17 PM No comments:

Although I am not in agreement with the author of this video as he seems to be against any form of Christian based education in any form, I am not posting this video to either argue that aspect for or against.  What is shown here is past, present and future plans of public education.  In the future, I will be showing and it has already been partially shown, the system is rigged in a way that it can not be fixed.  That is right, no matter what anyone does, the system is rigged so that it can not ever be fixed.

Any teachers offended by any of this, not to worry, we are still working on a sensitivity program for you.  The same for our elected school board.  Folk's do not send your children back into this horrible public system of deceit and corruption.   Also, take the time and do your own research.  We have asked the local school board to look at all of this information and we invited them to a public dialogue.  So far, they refuse to respond.  I would love it if all of this could be refuted and proven either wrong or somehow not correct.  But their silence is proving the information we are covering scares them because it is true and shows the fraud they are part and partial to.

But lets be fair.  Many of them have no clue about a lot of this.  Some should.  It may very well be that their eyes are now being open and they will soon learn that there is nothing they can do about it and except maintain the deception.  I would like to think that many of them are seeing the real issues now and are starting to look for answers.  Keep your fingers crossed and pray they are on our side.
at 4:50 PM No comments:

Who Controls The Children In Education? Part 2

Here is a must watch video.  It's nearly an hour long, but you need to see the entire video to see what this teacher uncovered about local, state and federal involvement in our, actually their, educational, or better put, propaganda and indoctrination system.  If you think there is any real control over the educational system at any level by our local officials?  Think again.  This woman documented more than you would ever expect.  Now the video is comparatively old, 1990's, but the situation has not gotten any better.

What we keep hearing is that more money must be thrown at the school system to improve education.  This is a broken record and a full out scam.  This ploy has been used now for the past 100 years and it works very well.  If you listen to this teacher, sending your children to public school is a horrible idea.  Think private schools are better?  Wait til the end as that question is answered in the video.  We viewed this video in it's entirety and we were shocked with what is revealed in here.

Teach your children at home otherwise you are going to seriously dumb them down and hurt their real potential of what your children can really become.  It's by design and it's well documented.  What we are going to continue to put out is all very well documented.  Again, for any teacher that may find any of this offensive, we are working on a sensitivity class for you, so do not worry about any of it.

Coming up we will be showing the shocking history of indoctrination education since the early 1900's and who has been behind it all.  Yes, it has always been the plan to dumb down the population.  Those behind financing education did not want competition in their future.  They planned well and have pretty much succeeded in those plans.