Mr Magoo in Peril's of Magoo.  Classic Cartoons from the past.  Watch Mr Magoo Cartoons every Saturday right here on GVLN.

Police say McBride’s boyfriend, 39-year-old James Owens Jr. bought alcohol for the boys who are just 13 to 14 years old.
“Blown away,” says Jon Tari, who knows the couple and lived in down the street. “They seemed like nice people. Shocked.”
“I look back now and I’m not surprised,” says Michele Paciello, who used to be friends with McBride. “But I’m still like is this really happening.”
Paciello says she did not appreciate how McBride acted around her teenage son.
http://wtkr.com/2013/06/28/beach-couple-arrested-for-child-sex-crimes/  Link back to WTKR with the rest of the story and where story originated.
Related articles

That's a fraction of the $105 million the state still has coming for leading an investigation that resulted in Abbott Laboratories paying $1.5 million to settle allegations that it promoted an anti-seizure drug for uses that were not approved by the federal government. A federal judge in Abingdon, Va., approved the settlement in October.


The attorney general's office already has received $10 million for its own use. The rest of the money will go to various public safety initiatives selected by the attorney general, but the Treasury Executive Office for Asset Forfeiture has demanded additional details on Virginia's proposals before cutting any additional checks.

In a letter earlier this week, Cuccinelli's office asked the Treasury office to release $800,000 for one of the initiatives: a grant to the Department of Criminal Justice Services for training to help law enforcement officers better respond to crisis situations involving mentally ill people.

"This is an important program that will receive funding to ensure that more of our first responders get the training they need to deal with these difficult situations," Cuccinelli said in a written statement Friday. "The added bonus is that it won't be at the taxpayers' expense."

Jazzy yet blues fly all over this tune.  Slikk Tim, from his album, Gutter Guitar, takes you on a fun journey through some classic jazzy blues.  Instrumental.  It's a solid song with some great drumming mixed in as well.  Listen to it here first and if you like it?  Download a free copy for yourself.

Spanish Steak - Recipe Of The Day

Pound thoroughly by means of a saucer a half cup of flour with a pound
of round steak.

Then over a hot fire quickly fry the steak and remove.
In the same pan fry two good-sized onions, thinly sliced, and half a
dozen good-sized tomatoes and one large mango pepper.

If the pepper is mild, add cayenne pepper. When the onions begin to get soft and the tomatoes to dry, add the meat. Cook very slowly until meat is tender.
One can use canned tomatoes very nicely for this. Cook onions and
tomatoes and peppers together, with plenty of oil or crisco until they
begin to thicken. Then add the meat. This is also a very satisfactory
way of reserving cold steak or any kind of cold meat. After the tomato
and onion mixture is well cooked, add the cold meat and heat up all
together.

If you look back through history, you can't help but ask, what happened to technology?  Full size V8 engine cars or SUV's get a mere 8 to 21 miles per gallon of gas at their best.  And that is with all of the advanced technology features and computers added into modern vehicles.  Yet when we turn back the clock to the early 1940's, we see this advertising for a big, heavy steel car advertising 25 to 30 miles per gallon.  No advanced computers, no advanced technologies, just plain simple good old fashioned gas engine.

Is anyone wondering about the state of education these days?  This is the kind of information that everyone should be looking at and asking questions about yet no one hears anything at all about this kind of stuff.  No one is looking through history and asking questions.  Why do we have so much unemployment when there is so much work to be done? 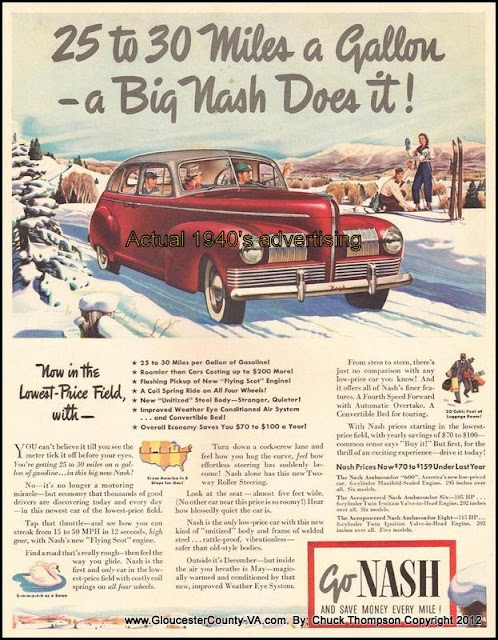 I Thank You, Classic Movie For Friday


Updated: Friday, 28 Jun 2013, 4:33 PM EDT
VIRGINIA (WAVY) - New laws scheduled to become effective July 1, 2013, implement tougher penalties for those who are distracted while operating a motor vehicle.
Texting While Driving
Current laws include texting while driving as a secondary offense, meaning a person may only be charged if they are found violating another traffic law. On July 1, texting while driving becomes a primary offense, according to the Insurance Institute for Highway Safety .
In addition to this change, the DMV reports, a person convicted of texting while driving will receive a $125 fine for the first offense and a $250 fine for subsequent charges. Currently, the fine for a first offense is $20 and any offense thereafter is $50.The new law also increases the penalties for a person convicted for reckless driving to include a mandatory $250 fine if the person was texting while driving recklessly.
This new law will not change the current hand-held devices law in Virginia, for which there are no restrictions.
DUI/DWI
Also effective July 1, any DUI conviction will be a class 6 felony if the driver has a current conviction of any of the following:
-Involuntary manslaughter
A DUI felony charge also carries a mandatory fine of a minimum of $1,000 and one year in prison.
Provisional Driver's Licenses
Current laws restricts those who hold provisional driver's licenses (driver's licenses issued to people under 18), from driving between the hours of midnight and 4 a.m. unless they are returning from their place of employment or school sponsored activity. Beginning July 1, the law will be amended to allow driving during these hours for additional reasons including coming from an activity that is supervised by an adult and sponsored by a civic, religious or public organization.This will continue to be a secondary offense.
Moped/Scooters
Effective July 1, those operating a moped or scooter are required to carry a government issued picture identification card. Also, drivers and passengers must wear a helmet at all times and use a face shield or goggles unless the moped has a windshield.
Effective July 1, 2014 all mopeds will be required to be titled and registered through the Department of Motor Vehicles.

http://www.wavy.com/dpp/news/virginia/new-texting-and-driving-laws  Link back to WAVY TV 10 where this story orignated from.