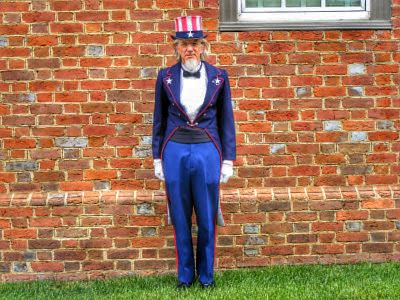 While we were in Yorktown Virginia during the Memorial Day services, there was a very nice gentleman dressed as Uncle Sam, an American Icon figure. Since we posted pictures of him on some of our sites, we have been getting hits from all over the world of people interested in seeing this photo. Though this is not new to us, it does tell a story of world interest in Americanism, patriotism, democracy and our way of life. The United States is still viewed as the world leader in many areas. Chuck Thompson and TTC Media handles a lot of American history and media that attracts a lot of international attention. We put one of our photos from the Battle of the Hook into the public domain about 6 months ago and it has since been distributed to the world in 365 different languages and gets rave reviews.

It seems easy to be down in the dumps during these economic tough times, this is why it is important to realize that despite these tough times, there is still plenty of rainbows that we should all be proud of as the United States of America is comprised of all of us here in this country. It is not our Government, it is "We The People". Remember, it was our forefathers that said no to repression. It is the true heart of American Spirit. Americans have always overcome the obstacles put before us. So even though we are going through tough times, it is the American Spirit that will get us out of it all.
at 2:54 PM