Vice President Joe Biden sent this message to people : Assault weapons and high-capacity magazines should be banned from civilian ownership 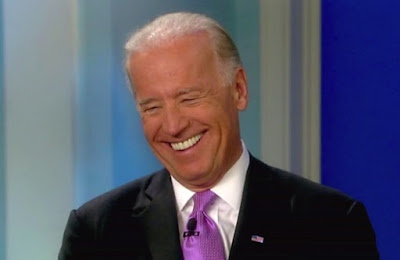 This creep has no use for the US Constitution despite what he may say.  He cares nothing about the rights of the people and only wants centralized government where the nanny state tells you what to do and how to think and will persecute you at the drop of a dime just to milk you for money.  He actually believes you are nothing better than a slave to the government and have no say in your own government.  He is part of the problem, not part of the solution.  But here is the rest of his very sick rant.

Over the past few years, we've watched as new horrific shootings have replaced previous ones as the deadliest in our nation's history.

Folks, enough has been enough for a long time.

You know that. On Monday, in the wake of this latest, deadliest, mass shooting, you started this petition. You worked together, calling on your government to ban AR-15-type weapons from civilian ownership. In the days following, we have seen members of the United States Senate take and hold the floor, refusing to back down, refusing to concede that we might need to wait for an even bigger national tragedy to finally make some changes.

To the creator and signers of this petition, I want to say this as plainly and clearly as possible: The President and I agree with you. Assault weapons and high-capacity magazines should be banned from civilian ownership.

When a lone gunman walked into a Century movie theater in Aurora, Colorado, he carried a Smith & Wesson M&P 15 -- a variation of the AR-15 rifle -- modified to hold as many as 100 bullets. He used it to kill 12 people and injure 70.

And when a lone gunman walked into a classroom at Umpqua Community College in Roseburg, Oregon, he carried a version of the AR-15. He used it -- and several handguns -- to kill 10 of his fellow students and injure nine.

And when a lone gunman walked into Sandy Hook Elementary School in Newtown, Connecticut, he carried a Bushmaster XM 15 -- another version of the AR-15 -- and multiple high-capacity magazines. He used it to kill 20 innocent children and six educators with 154 bullets in five minutes.

A single person killed that many people in just a few minutes. Not in a war zone. Here in America -- in a classroom.

These weapons have been used to commit horrific acts. They've been called "the perfect killing machines." They fire bullets at incredible speed that rip through bodies and cause devastating carnage, and can accommodate high-capacity magazines that allow them to effectively shoot up to 45 rounds per minute. We've seen their tragic results play out in our death tolls and in the thousands left wounded, struggling to recover.

As we learned this week from the family of the gun’s inventor, he himself did not intend that this gun be used by civilians, only by our soldiers in combat -- giving them an advantage over the AK-47. He didn’t own one himself. Here is what his family said:

"We think he would have been horrified and sickened as anyone, if not more, by these events."

Right now, these weapons are on the shelves in gun shops around the country, completely legal for civilians to purchase. They can be purchased in a matter of mere minutes. That should not be so.

Here's a start: We should renew the assault weapons ban that Congress passed in 1994 — but which expired ten years later. That ban, which covered 19 specific assault-style weapons, was included in a comprehensive crime bill that folded together three pieces of legislation. I remember it well. I was Chairman of the Senate Judiciary Committee at the time. I wrote much of the bill and led it through Congress — with the help of many others, especially Senator Feinstein on the assault weapons ban. I argued strongly in favor of banning these weapons. What's more, 46 House Republicans voted for that ban in 1994. Forty-six.

So what happened to that bill? To use a somewhat wonkish legislative term, it was "sunsetted." That means that this bill came with an expiration date: Ten years after its passage, it would need to be renewed. Under President Bush and a Republican Congress, the bill lapsed. And it hasn't been renewed since.

But renewing the ban on assault weapons isn’t the only thing Congress should do to help prevent the tragedy of gun violence around the country.

It could require that every buyer go through a background check before getting a gun -- to make sure dangerous weapons don’t end up in the hands of criminals or other people who have long been prohibited from possessing them. It could prevent people who are suspected of having terrorist ties and can’t get on a plane from buying weapons of war -- that’s just common sense. It could ensure that domestic abusers can’t go to the store to buy a gun -- filling the kinds of gaps in the law that leave too many innocent victims dead. It could end the freeze on gun violence research, so our public health experts can collect data and facts that would inform strategies to deal with this epidemic. And it could give law enforcement officials the tools and resources the President requested in his budget proposal -- so they can take dangerous criminals off the street and enforce our gun laws. Our Administration has done what it can. So have many cities, counties, and states.

Now it’s up to Congress to do its job.

They'll have a good opportunity this Monday, when the Senate is set to vote on a number of different gun safety measures -- votes that came about after that 15-hour filibuster, during which a series of Democratic senators refused to cede the floor. The measures they will vote on would address the fact that anyone on a terrorist watch list can still legally purchase guns and explosives. They will address the current background check requirements for prospective gun buyers.

Because you’re not alone in recognizing the need to act -- to take steps, consistent with the Second Amendment -- that will keep our children and communities safe. Here's who else agrees with you: The Department of Justice. Dozens of United States Senators. Faith leaders, law enforcement officials, and responsible businesses. Public health experts. And the vast majority of the American people, including the vast majority of gun owners in the country.

You know that. And that is why you spoke up. That matters. But the fact is that we have three separate but equal branches of a government for a reason.

And so, to speak directly to those members of Congress who, in the wake of this most recent, most horrific killing of our citizens, might be considering stepping up and getting this done once and for all, I'd like to remind you that this will not stop on its own. It will not stop. In the three and a half years since Newtown, there have been at least 1,002 mass shootings in this country. At least 1,135 people killed, and 3,953 wounded. That includes 49 killed and 53 wounded in Orlando.

You know in your heart that this is the right thing to do. You know that by stepping up, your action has the potential to create a domino effect. Have the courage to do it.

We have done it before. We can do it again.

He gave his twisted opinion, now I am going to give mine.  What happened in Orlando was tragic, not question.  But it was in no way a terrorist attack as the media is telling you to believe it was.  If it had been a terrorist attack, the targets would have been high ranking government officials.  That is how real terrorism works.  Terrorists do not go around killing innocent people to prove their point.  They target government officials and let them know how truly vulnerable they are.  So the world isn't seeing actual terrorism in any way, just setups being called terrorism.  The ends justify the means for these sick jokers in government and the media.  You are free to believe anything you want, but in the end, if you do not head the warnings, you will be very sorry.  That is my opinion on these matters.
at 6:20 PM No comments: