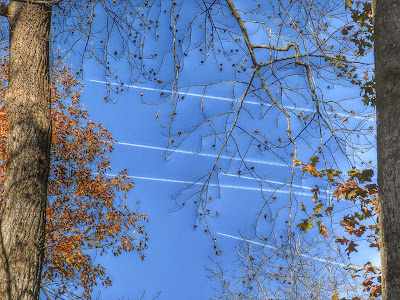 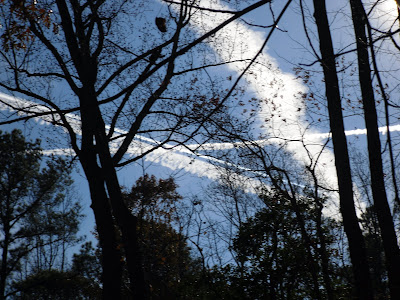 This is just disturbing. Before anyone tries to tell me that this is nothing but a normal contrail, let me qualify myself. I am more than old enough to know and have lived most of my life within miles of major international airports to know that, "NO", this is not normal or business as usual. I have seen the videos explaining what these are and these are not good. I have seen poor arguments saying that these are not chemtrails and there are no such things. Well I have months worth of high definition photos and videos from all around the state recording how the same planes keep flying back and forth all day and night blanketing the sky until there is near no clearing at all. I even put up another web site about this phenomenon and one person even sent me information how this is sold to the pilots to do this all over the world.

It goes something like this, it is a part of our military satellite defense system. We blank out the sky so that our enemies satellites can not see our defenses. Anyone who buys that, I have a bridge for sale in Brooklyn. He also went on to say that the reason this is not released as public information is because the polymers used in the sprays are considered toxic. Do your own research. Youtube has videos of a crew in a plane taking care of the tanks that are used to spray our skies. Another web site shows the chemical composition of the sprays they are using and also have testimony from airline executives about how the military has briefed them as they are also using commercial flights to spray our skies, but if the executives disclose this information, they will never work again. Guess the threats didn't take.

Don't take what I say here as gospel. I am still researching this myself. But what I have found to date is very disturbing to me. Do your own research and come to your own conclusions. Watch the sky more than you have and see what you are really seeing and if that makes any logical sense to you. It does not to me. Watch the patterns the jets make in the sky. See if the same planes keep coming back around and creating more patterns in the area they were just in. Wake up. I would love to be proved wrong. I just do not see it though. Check out the British videos on YouTube where this was done to an area in England and how many of those people living there died of unusual cancers and at above normal numbers. The British Government admitted to it 50 years later after the fact. Are we under the same situation? It's just a question. Do your own homework and come to your own conclusions.
at 10:30 PM No comments: