There is an old saying that a picture is worth a thousand words. Pictures are used to tell stories or support stories every day. Pictures in and of themselves can be manipulated into telling a story in a very certain way. But what happens when you open the meta data on digital pictures? A whole new story can and often does develop. Especially in legal cases. On the case we have been reporting on for the past month now we have been showing a tremendous amount of evidence of tampering and down and outright fraud by both Gloucester County Animal Control and the Gloucester County Sheriff's office to name a few.

Well now we have moved on to the pictures that were taken by two different Animal Control officers. Shaun Doyle and Jeff Stillman. In these pictures is evidence that everyone from the Animal Control office, that were there on the property May 4th, 2010, lied about the conditions on the property and even criminally produced false evidence to support such. The pictures by themselves without the meta data revealed can be made to tell a story in any way that these people wanted to tell it. Once the meta data was revealed however, a new story came very much into play. We zoomed in on the backgrounds of some of their pictures where evidence was obvious and we were able to build a time line showing through the meta data how they produced false evidence and manipulated evidence.

The new evidence with the meta data revealed simply can not be argued. Here is some interesting information for you. A digital photo contains meta data that never changes no matter how many edits you make to it or how many times it is copied and or altered. It still maintains the time and date stamp of when the original photo was taken and what camera it was taken with along with other technical data that does not mean much to most people. The time and date stamp on Gloucester Animal Control's photo's is very much a smoking gun against them. Gloucester Animal Control was using Kodak Z885 cameras. The 885 means 8 mega pixels and 5 times optical zoom.

Advertisement:  Free Office Suite.  Open Office.  This is free software.  No gimmicks, no come on's, no sign up's.  No kidding.  Read the stories, follow the links, get stuff, save money.  Click Here.

Though we will not publish to the public all of the evidence that we are reporting about in this story, we can show you a few samples here that does not reveal anything private about the victims so you have a better understanding of what we are reporting to you. The pictures below are part of the actual time line evidence on our secure site. 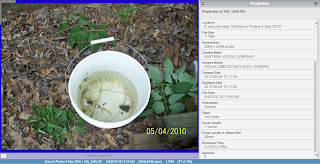 Both Animal Control and Sheriff's Deputies claimed that there was no water on the property for the animals on the property.  Yet their own photographic evidence says otherwise.  This is one of a number of pictures showing such. 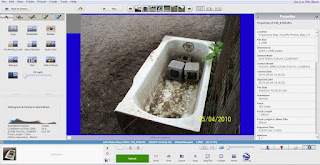 This picture is one of Animal Controls files of evidence that there was no water on the property for animals.  Look at the mud ring around the area of the tub and then look at the next picture. 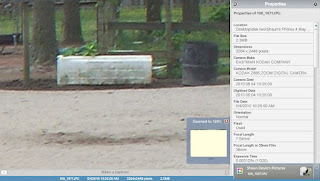 Animal Control drained the water out of the tub and waited for it all to dissipate before taking the photo above this one.  All you have to do is note the date and time on each photo's meta data.  We don't just have one photo like this.  We have a bunch of them.  The meta data shows plenty of water on the property and then water drained out of their containers.  That's cruelty to animals as perpetrated by Animal Control and with the help of the Gloucester County Sheriff's Office.  We have a private secure site we built for law enforcement investigators and the entire time line of evidence is on that site.  There is a lot of evidence on that site that we can not post publicly as it would violate the privacy of the victims in this case.

Visit  https://sites.google.com/site/gloucestervanews/  for all the information on this case in one central location.
at 8:09 PM