Many people needlessly shun raw nuts from their diet, believing their fat content contributes to weight gain. But mounting research suggests nuts such as pecans and macadamias may actually help you live longer—and help you lose weight to boot.
This isn’t so surprising considering the fact that tree nuts are high in healthful fatsthat, contrary to popular belief, your body needs for optimal function. Also, to optimize your health, weight, and longevity, you’ll want to shift your body from sugar-burning mode to fat-burning mode. One of the simplest and most effective ways to do this is to implement intermittent fasting.
In order for your body to begin burning fat as your primary fuel instead of sugar,it is helpful to swap non-vegetable carbohydrates like sugar and grains in your diet with high-quality healthful fats. Raw nuts are one source of such fats.

A recent study published in NEJM was a large-scale, 30-year long study done at Harvard.1, 2, 3, 4 It found that people who regularly ate a small handful of nuts at least seven times per week were 20 percent less likely to die for any reason, compared to those who largely avoided nuts in their diet.
They also tended to eat more fruits and vegetables, and were leaner than their nut-eschewing counterparts. Nut eaters were more likely to exercise and take dietary supplements. As reported by the Washington Post:5

“Even those who ate nuts less than once a week had a seven percent reduction in risk. Consuming nuts at least five times a week corresponded to a 29 percent drop in mortality risk for heart disease, a 24 percent decline for respiratory disease and an 11 percent drop for cancer.”

The study does have its weaknesses. For example, participants only filled out dietary questionnaires once every two to four years. They also included all types of nuts (including peanut, which is not a nut but a legume and not nearly as health promoting as tree nuts).
The study also didn’t differentiate how they were prepared (i.e. raw or roasted, for example). That said, the result of the featured study has added support from previous research.
For example, a study6 published in the Annals of Internal Medicine earlier this year found that middle-aged women who followed a Mediterranean-style diet rich in nuts and vegetables were approximately 40 percent more likely to survive into later decades without developing some form of chronic disease—including age-related memory deterioration.
Healthful fats and antioxidants, obtained from nuts and vegetables respectively (although nuts also contain beneficial antioxidants, by the way), are both critical factors for brain health. Lead researcher of the featured study, Dr. Ying Bao, told Boston.com:7

“I’m fairly confident in our results. We have long known that nuts are nutritious foods filled with folate, potassium, fiber, good monounsaturated fats, and antioxidants.”

This is a Flash-based audio and may not be playable on mobile devices.

All nuts are not necessarily created equal, and tree nuts are, from a nutritional stand point, far preferable to peanuts, which is technically a legume. My main objections to peanuts are that they tend to:
My favorite nuts are macadamia and pecans, as they provide the highest amount of healthy fat while being on the lower end in terms of carbs and protein. Most nuts’ nutritional makeup closely resemble what I consider to be an ideal ratio of the basic building blocks—fat making up the greatest amount of your daily calories, followed by a moderate amount of high-quality protein and a low amount of non-vegetable carbs.
The main fatty acid in macadamia nuts is the monounsaturated fat oleic acid (about 60 percent). This is about the level found in olives, which are well known for their health benefits.
I have been consuming macadamia nuts and pecans almost daily since I started lowering my overall protein intake about a year ago. I primarily use raw macadamia nuts, but also enjoy pecans. They provide a great source of calories and are a phenomenal snack alternative.
To gain a better idea of what I’m talking about, please refer to my Food Pyramid for Optimal Health. 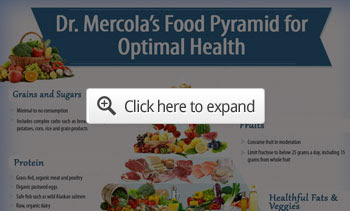 In the featured study,8 those who ate a one-ounce serving seven times or more per week appeared to benefit the most. One ounce of nuts equates to just over 28 grams, or about a small handful. The following list shows the nutrition facts9 in grams per one ounce for your most common tree nuts:

Generally speaking, each type of nut will offer a slightly different mix of nutrients for your health, so it’s a good idea to include a variety of nuts rather than sticking to one at the exclusion of all others. For instance:

As mentioned earlier, one of the keys to optimal health is to switch your body from burning sugar to burning fat as its primary fuel. This requires a shift in diet, away from non-starchy vegetable carbohydrates toward foods that are high in healthful fats—such as those found in tree nuts. Many would benefit from getting as much as 50-85 percent of their daily calories from fats. Although this sounds like a lot, by volume the largest portion of your plate would be vegetables because they have so few calories. Examples of healthful fats would be:

Besides making sure you’re eating the right foods, intermittent fasting can be quite helpful for achieving this metabolic shift, and here’s why: It takes about six to eight hours for your body to burn the sugar stored in your body as glycogen. However, most of us never deplete our glycogen stores because we eat three or more meals a day. This teaches your body to burn sugar as your primary fuel and effectively shuts off your ability to use fat as a fuel.
Most people need several weeks of intermittent fasting, but some may need several months to teach their body to turn on the fat burning enzymes to effectively use fat as their primary fuel. It is important to understand though that once you teach your body to burn fat effectively and you are normal body weight without high blood pressure, diabetes or high cholesterol, you only need to do intermittent fasting occasionally. You can go back to eating three meals a day as long as you keep your ideal body weight.
I prefer to think of intermittent fasting as a lifestyle rather than a diet. You could even think of it as intermittent eating rather than intermittent fasting, as all you’re doing is restricting your eating to a smaller window of time each day rather than grazing from early morning to late at night. I restricted my eating to a 6- to 7-hour window each day until I became fat adapted and lost about 10 pounds. Now, I still rarely ever eat breakfast but will have some nuts. Many days I only eat one meal around 2-4 PM, but several days a week, I will have two meals.
Weight loss is not the only beneficial side effect of intermittent fasting. It has also been shown to generally extend lifespan much in the same way calorie restriction and extended fasting, but without the suffering that goes along with those methods. It is likely that calorie restriction works to increase longevity by improving insulin and leptin resistance and also inhibiting the mTOR pathway by protein restriction. Healthful fat does not impair any of these pathways and appears to be the solution to having a regular calorie diet and still reap the rewards of calorie restriction.

Reasons to Give Intermittent Fasting a Try

If you’re ready to start intermittent fasting, consider skipping breakfast, make sure you stop eating three hours before you go to sleep, and restrict your eating to an 8-hour (or less) time frame every day. In the 6-8 hours that you do eat, have a moderate amount of healthy protein, eliminate or severely minimize carbs like pasta, bread, and potatoes, and exchange them vegetables and  plenty of healthful fats. As already mentioned, this includes raw nuts and other foods like butter, eggs, avocado, coconut oil, and olive oil.
Remember, it will take a few weeks to a few months for your body to make the transition to fat burning mode, and you will need to exercise some willpower and self-discipline to get there. Just gradually extend the time that you start your first meal until it is in the afternoon.
Once your body has made the shift from carb burning to fat burning mode, you can expect cravings for sweets and food in general to rapidly decrease. This is a huge boon for most people, I’m sure. I know it was for me. For many, the desire for sweets and junk food will disappear entirely. Remember, it will typically take a few weeks, and you have to do it gradually, but once you succeed to switch into fat burning mode you’ll be easily able to go without food for 18 hours and not be bothered by hunger.
Another phenomenally beneficial side effect that occurs is that you will radically improve the beneficial bacteria in your gut.
Supporting healthy gut bacteria, which actually outnumber your cells 10 to one, is one of the most important things you can do to improve your immune system so you won’t get sick, or get coughs, colds, and flus. You will sleep better, have more energy, have increased mental clarity and concentrate better. Essentially every aspect of your health will improve as your gut flora becomes balanced.
Based on my own experience with intermittent fasting, I believe it’s one of the most powerful ways to shift your body into fat burning mode and improve a wide variety of biomarkers for disease. The effects can be further magnified by exercising while in a fasted state. For more information on that, please see my previous article “High-Intensity Interval Training and Intermittent Fasting - A Winning Combo.” Clearly, it’s another powerful tool in your box to help you and your family take control of your health, and an excellent way to take your fitness to the next level.

When Buying Nuts, Consider These Facts

To increase the positive impacts on your health, look for nuts that are organic and raw, not irradiated or pasteurized. If you choose to use almonds (remember that they are relatively high in protein), be aware that pasteurized almonds sold in North America can still be labeled "raw" even though they've been subjected to one of the following pasteurization methods:
There are generally no truly "raw" almonds sold in North America, so don't be misled. It is possible to purchase raw almonds in the US, but it has to be done very carefully from vendors selling small quantities that have a waiver from the pasteurization requirement. The key is to find a company with the waiver that is not pasteurizing them. When consumed with these guidelines in mind, raw, organic nuts are a convenient and enjoyable superfood to add to your diet. And this is precisely why they’re recommended as one of the best sources of healthy fats in my nutrition plan.