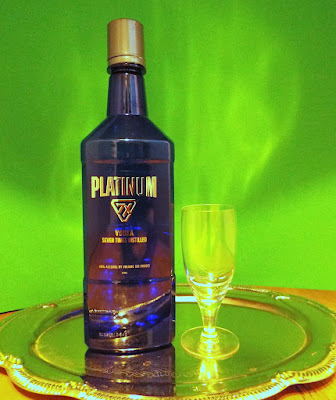 Vodka.  Almost everyone you ask what Vodka comes from, the typical answer is that it comes from potatoes.  Well, that answer is both correct as well as incorrect.  Yes, you can make Vodka from potatoes, but you can also make vodka from any ferment-able substance or biomass.  Vodka can be made from sugar, corn, wheat, rice, sorghum,  rye, barley and the list goes on.

What a distiller is doing is creating as pure a form of ethanol as possible from a base alcohol.  When this is done, there is pretty much nothing left from the base flavors in the final product.  In other words, you will not get any flavors of potatoes in Vodka nor any base flavors of whatever base is used to create Vodka.

So what gives Vodka it's flavors?  As a pure ethanol, vodka only has 5 known flavors.  Those flavors only come from two components.  Those two components are the local water supply of the distillery when the distiller proofs down the Vodka, which means watering down the Vodka, and the yeast that was used in fermenting the base mash for making the base alcohol.  There are hundreds of variations of yeast out on the market today and each one has a different flavor.  Those yeast flavors do in fact transfer to the final product.  It does not matter if we are talking about Vodka, Whiskey, Gin, Rum, Brandy or and variations of liquors.

With that note, what is the difference between a $10.00 dollar bottle of Vodka and a $100.00 bottle of Vodka?  $90.00.  Marketing.  That's mainly it more than any other aspect of the product.  Now there are some other variables that can distinguish a good Vodka from that of a bad one and that is all dependent on the distillery and their practices.

What is distilling though?  It is merely the concentration and at the right distillery, the purification of alcohol.  What is done in a distillery is, a base, either liquid or a full mash, that has been fermented to produce a base of either beer or wine, is entered into a still.  The still heats the base alcohol up to where alcohol becomes a gas and travels upward in the still.  It then goes through a cooling process to come out as a concentrated liquid spirit.  For Vodka, you run the still at about 190 proof or better which is a near pure ethanol, stripping out the base flavors and smells.

The first thing out of a still is the lightest forms of alcohol known in the industry as heads.  Heads have some nasty chemicals in them known as hexitones, acetone, and methanol.  These chemicals are very bitter tasting and is the stuff nasty hangovers come from.  Not what you want in your main product.  But, there is no legal requirement to take them out.  These chemicals are in your beer and your wine and there is no real way to get them out except through distillation.  A good distillery will take out these nasty chemicals.  Other distilleries leave them in which will give the final product some very nasty flavors.

But this is not the only area where nasty flavored chemicals can come into play during the distillation cycle.  At the very end, as distillation is coming to a close, the last part coming out are the heaviest forms of alcohol that are referred to in the industry as tails, which are lighter in taste but again contain some nasty flavors.  Most distilleries separate the tails from the main product, but again, there is no legal requirement to do so.

So if you leave in both the heads and tails in the main product, you are going to get a rather nasty tasting product.  Are there ways to remove these nasty flavors?  Yes.  Charcoal filtering is probably the most commonly used tactic to rid the product of the nasty taste of these other alcohols.  My own preference is to buy and consume products where the distillery takes out the heads and the tails from the main product.  How do you know which one's do this?  You don't.  There are no requirements to report this information to the public.

This aspect of heads and tails is true of all spirits produced, not just specific to Vodka.  So these are some of the other aspects that differentiate one product from another.  Finding an inexpensive Vodka that is just as good, if not better than, a very expensive one isn't all that hard when dealing with Vodka.  That isn't the case with other spirits.  Other spirits have many more variables to factor in.

Pictured at the top of this article is Platinum Vodka.  It's inexpensive and fully agreeable.  Not considered the best out there, but I have no issues with it.  It's 7 times distilled.  What does that mean?  It has more marketing meaning than anything else in my own opinion.  There are two ways to achieve 7 times distilling or 3 times 5 times or whatever anyone wants to claim for their product that seems to separate them from everyone else on the market.  But let's cover the bases here anyway.

There are a number of different stills out on the market from which to make spirits.  The three main types of stills are the continuous still, the pot still and the column still.  We won't cover the continuous still as that would not be used for this type of statement in production.  That leaves the pot still and the column still.  If you are using a pot still, 7 times distilling means you have put the alcohol through the distilling process 7 different times which is a real time nightmare.  In a column still, one only needs to put on 7 heads on the column.  Each head on that column produces it's own distillation and the 7 heads covers the term, distilled 7 times.  Another term would be a 7 times re-flux system.  One run still equals 7 times distilled.

At present, Vodka sells more cases nationwide as well as worldwide than any other spirit on the market according to Beverage World.  Whiskey produces more revenue, but bottle volume, right now Vodka is number one.  That changes a great deal.  Usually whiskey is the number one consumed spirit throughout the world.  Flavored Vodkas have had a massive impact on the market which is starting to soften according to industry insiders.  Most of the flavored Vodkas are referred to as Candy Vodkas by many in the beverage industry.  Vodka takes just about any flavor well as again, Vodka has little in the line of flavor profiles on it's own.

Now here is some fun.  How many people know what Vodka means?  It has a number of meanings from little water, to burnt water to even burned wine.  Vodka as we know it today is mostly a 20th century product dating back to only 1934.  Earlier products called Vodka were usually strong flavored spirits of all kinds and from various bases for production.  The name Vodka goes way back to the 8th Century and possibly even earlier.  No one is sure and research still continues.

Email ThisBlogThis!Share to TwitterShare to FacebookShare to Pinterest
Labels: Alcoholic beverage, All About Vodka, Beer, Distilled beverage, Distilling, Heads, How It's Made, Tails, Vodka, What are the differences, What's In It, Wine, Yeast
Location:Gloucester, VA Gloucester Courthouse, VA 23061, USA