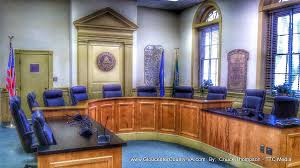 I moved to eighteen years ago and continued my hobby of following local Counties’ government for ten years. If the citizens do not follow their governing’s actions they would be in deep trouble. The process of tax and spend is an ongoing annual onslaught against the citizens net income. Most do not care especially in small counties where the largest employer is the Government. The nepotism, inter-relationship to business creates a system of quiet do not disturb mentality that has a wide range of negative impacts to those who are not a part of the system.

This process is slowly changing in as the population grows and more "outsiders" are moving in and becoming pro-active to their local government’s fiscal and managerial practices. Some very positive changes have occurred in the past four years but there is still a long way to go to make the process self-sufficient.

Since 1999 I have been a small voice at the local Board of Supervisors and School Board meetings, some suggestions have been implemented many haven't.  Many of ones suggestions that can save funding (tax increases) will go by the wayside since it may affect a retirement pension or become a cost effective solution. God forbid we don't want to go that far in creating a lean and mean cost effective government.

Consolidation has always been one of my prime positions, the need to have sixteen department heads in-lieu of eight could save up to one million a year, also providing a ladder for promotions that is now almost non-existent unless you leave the county.

I have written many articles over the years pertaining to government and some with spreadsheets to emphasize rising costs or lack of annual changes in doing business the same as usual.

Time does not stop for no one but time should be able to provide the incentive for the young to step up to the plate and follow their local government. The regulations and policies they put in place annually may in their out years become the foundation where you are no longer a free person or country. Will I or we see change as the annual process of budgeting and taxing of your net pay takes place over the next several months? Without an increased showing of citizen participation at the meetings it will be hard to determine.

One thing for sure the special interests will stand tall asking for more; and will want to raise taxes to fill their individual needs.

The following are Howard’s public comments during the Board of Supervisors meeting. We will gladly publish any and all public comments made at public meetings as they are submitted to us at Kennysr61@Gmail.com
·
Mr. Chairman:  Members of the Board, Mr. Fedors & Mr. Wilmot.

As promised to a few folks I recommend you follow through on this topic since you have already have had a discussion on the subject in the past. Over the past eight years, the working force has seen their economy and jobs decrease to the point where they have to work multiple jobs to stay afloat. This in turn decreases the amount of time they can donate to critical positions required in the county.

I am speaking about our Rescue Program in the county; many hours are required to learn and become a licensed EMT by the state and be able to operate the vehicle. With this in mind and you should never be caught where you cannot answer the bell.

I recommend you proceed to have all ambulance movement in the county be a paid for service and all employees receive a salary. There are provisions that can be accomplished for those who lack the insurance for payment as covered by law.

To make this process work I would suggest you send a small group to Richmond County and be briefed on how they operate and collect their funds for a successful rescue operation in their community.

I have attached a copy of a redacted billing that provides how the process is billed and what the individual pays, depending on their policy.  The winner now in is the insurance company, a profit to the shareholder.

With billing to insurance, you free up a large possible budget allocation for items necessary to upgrade and maintain your existing excellence service.

A process worth tackling immediately and implementing the first of July 017.

2.      The subject of proffers ties into the above subject, a positive use for these funds. Connecting to a shopping center is a disaster, look to and the carts are left strewed all over the place, especially in the housing areas. We also do not need to waste funds on sidewalks that parallel interstate 17. This highway will eventually become eight lanes wide and the jackhammers will only remove them. Short lane is also a waste of money since it could also become a four-lane road interesting with a four lane T.C. Walker extension towards route 14. I do not believe you are at the 12 year markers, so keep your money in investment until you can spend it wisely.

3.      The change in the real property tax year may well pass tonight, but keep in mind to eliminate stealing from the public the tax rate change should only occur on the first day of the new fiscal year. The windfall then is non-existent; this process should also apply to personal property. If not the need for a balanced budget is only an exercise in balancing numbers to meet state audit regulation, the taxpayer is the loser.

4.      You need to push the buttons at VDOT to have Route 17 re-painted, the lines are just about gone creating a driving hazard at night. Appreciate all you can do to correct this safety hazard.

I thank you for your time.

The following are the public comments Howard made at the Public Hearings on the County Administrator’s proposed list of Capital Improvements (Buildings, parks, parking lots and such they want to build or fix), and on proposed changes to our local government’s ordinance (Local law) on Noise Control. These public hearings also took place during the February 7th meeting:

Politically you all have major needs at the taxpayers’ expense. The best way is Pay as you go.

The most critical at present are the software programs that interact with all departments including all public service equipment both audio and software.

School HVAC units have been neglected for more than 40 years now is the time to upgrade without debt.  Buses are an annual requirement by regulation. Millions have been spent on school roofing, the need to have in-house engineering or high school seniors or juniors using a CAD system design truss systems for all the schools similar to Page, along with metal roofing applied. A major cost savings over time.

Debt needs to be restrained for the next five years at least. Paying down the existing 50 to 60 million unfunded and obligated debt is necessary.

Consolidation of transportation, facilities, and utilities on one site at T.C. Walker road is a must.

What has happened to the utility funds outside of the consent order? What is left and why can it not be obligated and utilized now?

Sitting on my porch today, it was vehicular noisy, are you going to build a wall to suppress this discomfort? I think not.

Noise is music to one’s ear, some for the good and some an irritation. You need to be selective in government control of private property including the individual.

Noise suppression from to is a norm. All areas that have condensed housing may have logical restrictions

If you live in the boonies with acreage, you need no government interference unless you are exceeding logical noise decibels.

Animals and fowl talk at all hours of the day or night. Neighbors need to communicate with each other if a problem arises. Most can be resolved without a government rule or the sheriff showing up at the door.

Only the elderly hear some noise so an ordinance would not apply. Loud could be soft who knows.

Let us put logic into the government’s methods as they try to control the mass, which will not work in the long haul.

We thank Howard for his efforts and for his submission. We encourage other residents, landowners and businesses to actively follow our elected and employed local government representatives and administrators, and to help hold them accountable for their actions. Remember, all levels of government belong to We The People, but that ownership becomes compromised and weak when We consent to their actions by our silence.