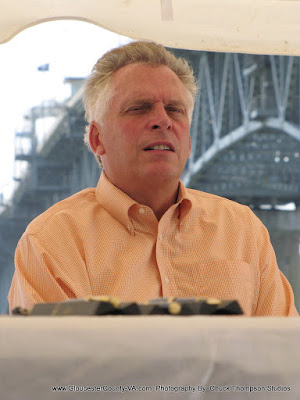 RICHMOND - The annual Governor’s Technology Awards were presented to honorees in nine categories at a special ceremony at the Commonwealth of Virginia Innovative Technology Symposium (COVITS) in Richmond on Sept. 9. On behalf of Governor Terry McAuliffe, Secretary of Technology Karen Jackson presented the awards to a distinguished group of Virginia government entrants, including state and local government and universities.

“I want to congratulate the winners of these awards,” said Governor McAuliffe. “Building a new Virginia economy requires the ability to innovate and find ways to increase efficiency in government. The future is bright for the Commonwealth as these talented groups continue to use technology to make government more efficient, less expensive and more responsive to taxpayers.”
Winners were determined by a panel of government information technology (IT) experts. For 18 years, the Governor’s Technology Awards program has recognized public sector IT projects that have improved government service delivery and efficiency.

Multiple awards were presented in several categories because of the extremely close scores between projects. Executive summaries of each winner’s entries are posted on the COVITS website, http://covits.virginia.gov/winners.html, to provide inspiration and best practice examples to peers and partners.

CROSS-BOUNDARY COLLABORATION ON IT INITIATIVES

IT AS EFFICIENCY DRIVER – GOVERNMENT TO CITIZEN

IT AS EFFICIENCY DRIVER – GOVERNMENT TO BUSINESS

IT AS EFFICIENCY DRIVER – GOVERNMENT TO GOVERNMENT

IT AS EFFICIENCY DRIVER – GOVERNMENT TO GOVERNMENT

INNOVATIVE USE OF TECHNOLOGY IN LOCAL GOVERNMENT

INNOVATIVE USE OF TECHNOLOGY IN EDUCATION

INNOVATIVE USE OF BIG DATA AND ANALYTICS

INNOVATIVE USE OF OPEN DATA 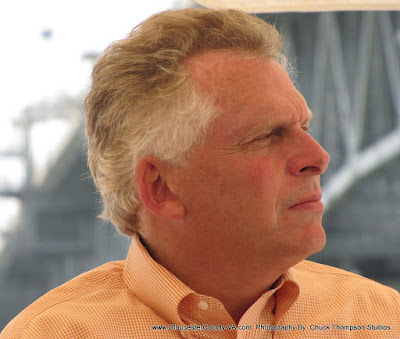 RICHMOND - Governor Terry McAuliffe dedicated today a new bridge that carries Washington Boulevard (Route 27) over Columbia Pike (Route 244) in Arlington, as the “Freedmans Village Bridge,” in honor of Freedmans Village, a historic community that once occupied the surrounding land and was a refuge for freed and fugitive slaves during the Civil War. Transportation, community and local leaders, and descendants of Freedmans Village families, joined the Governor in celebrating the new transportation asset, while paying tribute to the historical significance of the Freedmans Village Community.

“Today’s dedication ceremony celebrates the completion of a new bridge that connects a vibrant and busy travel area in Northern Virginia, connects communities, and connects the present time with a rich, historical past in Arlington,” said Governor McAuliffe. “Community input and partnership was critical to this project’s development, and resulted in adopting the best available design options, and most importantly, led to the naming of the bridge as the Freedmans Village Bridge. The bridge is a model for the ommonwealth of how partnership and cooperation can produce positive results and critical improvements to our infrastructure.”

Transportation Secretary Aubrey Layne added, “The new Freedmans Village Bridge is a great example of Virginia’s commitment to replacing aging and deteriorating infrastructure. Through the efforts of our project team, federal, local and contractor partners, and the local community, the new bridge and interchange accomplish our operational and safety goals, enhance travel for vehicles, buses, bicyclists and pedestrians, and preserve access to the local neighborhoods.”

The bridge has four 12-foot lanes, improved shoulders and an open area separating the westbound and eastbound spans, allowing natural light to illuminate Columbia Pike below. The bridge is built wide enough to accommodate growth, and bicyclist and pedestrian paths, along Columbia Pike.

The original bridge, built in 1942 as part of the Pentagon Roadway Network, was deteriorating to the extent that it rated as structurally deficient. Planning for the new bridge began in 1996, but faced budget delays and constructability challenges. A citizens’ task force was created in 2006 to address the aesthetics and accessibility of the bridge, as well as safety and operational issues. VDOT engineers worked with the task force and surrounding community to keep local South Queen Street open with full access to and from Columbia Pike.

Construction on the design-build project began in 2011 by Shirley Contracting Company. Landscaping around the bridge and interchange is scheduled to occur this fall. 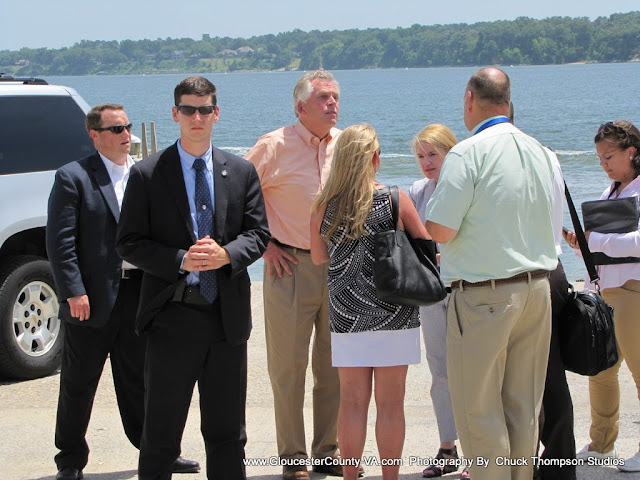 The MOU, signed in a public ceremony at Gloucester Point Beach Park on the York River, directs three state agencies to work together to identify new potential public-access projects, particularly at bridge crossings and roads.

“Expanding public access to state waters is a concrete step we can take to help Virginians and visitors enjoy outdoor recreation here in our great Commonwealth,”said Governor McAuliffe. “Water-based recreation encourages physical activity and appreciation for Virginia’s natural resources and it is an important driver of our tourism sector and with it, the new Virginia economy.”

The MOU formalizes the process by which the agencies will work together on new access projects.

Specifically, the MOU states:
·         DCR, DGIF and VDOT representatives will meet at least annually to review bridge, road or ferry project sites for the potential to offer public access to state waters.
·         DCR or DGIF will seek comments from adjacent property owners, local governments and other stakeholders for proposed access projects.
·         VDOT will stabilize or leave in place any access roads or staging areas within its right of way that could be useful for the development of access projects.

Gloucester Point Beach Park was selected for the signing because all three agencies worked with Gloucester County to create public access to the river there.

New or enhanced access points for public recreational use can qualify as Virginia Treasures through the governor’s new initiative. The goal is to designate 1,000 treasures during the McAuliffe administration.

For more than 15 years, the Virginia Outdoors Demand Survey has ranked public access to state waters for recreation as one of the top 10 outdoor recreation needs in the state. The survey is administered widely to a cross-section of Virginia residents. To learn about the survey, visit www.dcr.virginia.gov/vop. 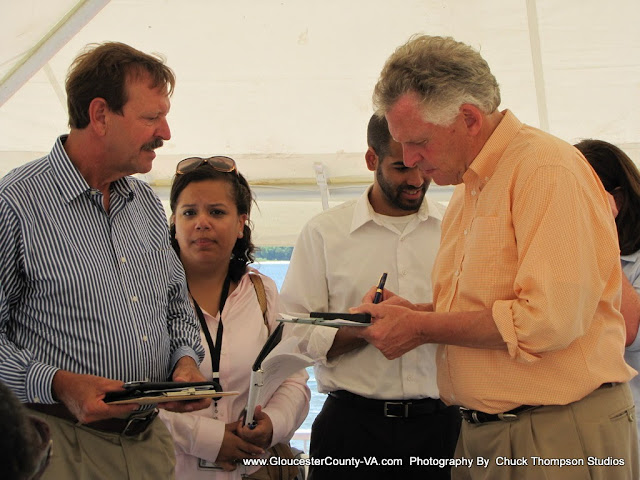 RICHMOND - Governor Terry McAuliffe announced that CEB, the leading member-based advisory company, will invest $149.7 million in a new headquarters operation to support the company’s next-generation workplace plans and accommodate its growing global requirements. The company has signed an Agreement to lease approximately 350,000 square feet of space in The JBG Companies’ new Central Place development in Rosslyn, Virginia. CEB will be the marquee tenant in the building to be named “CEB Tower.” CEB plans to move to its new global headquarters in 2018. The project will create 800 new jobs.

Speaking about today’s announcement, Governor McAuliffe said, “Virginia has proudly served as home to CEB since its move from the District in 2008. A new global headquarters and investment of this magnitude are tremendous testaments to the confidence the company has in Arlington County and the Commonwealth as it grows its presence internationally, and creates the workspace and technology for jobs of the 21st century. As Governor, I am committed to bringing projects like these to Virginia—those that create high-paying jobs and will help to diversify and protect the Virginia economy from federal budget cuts. We celebrate this impressive global headquarters operation and 800 new jobs, and look forward to CEB’s continued success in Virginia for years to come.”

“CEB’s cutting-edge new headquarters in CEB Tower will accommodate the company’s expanding global requirements and provide room to continue its positive growth trajectory into the future,” said Maurice Jones, Virginia Secretary of Commerce and Trade. “This tremendous project ensures the company’s long-term commitment to the Commonwealth, and Virginia is proud to boast CEB on its roster of corporate headquarters.”

CEB equips more than 10,000 organizations around the globe with insights, tools, and actionable solutions to transform enterprise performance. By combining advanced research and analytics with best practices from member companies, CEB helps leaders realize outsized returns by more effectively managing talent, information, customers, and risk. Member companies include nearly 90% of the Fortune 500, more than 75% of the Dow Jones Asian Titans, and 85% of the FTSE 100.

“Virginia has a vision for economic development and they are committed to working with companies to bring it to fruition,” said Tom Monahan, CEB Chairman & CEO. “This Agreement simply would not have been possible without the exceptional partnership of the Commonwealth and Arlington County. The Governor’s office and our local government representatives clearly demonstrated why Virginia is a great state for business. Under their leadership, we are confident in Arlington’s future as a business hub and thrilled to be a landmark business in—and significant economic contributor to—the Rosslyn community.”

The Virginia Economic Development Partnership worked with Arlington County to help secure the project for Virginia. Governor McAuliffe approved a $4.5 million grant from the Governor’s Opportunity Fund to assist Arlington County with the project. The Governor also approved $5 million in funds from the Virginia Economic Development Incentive Grant (VEDIG). VEDIG was established as a self-funded program of performance-based incentives that the Commonwealth awards to exceptional economic development projects with large numbers of employees and very high wages relative to average wages for that particular area. Funding and services to support the company’s employee training activities will be provided through the Virginia Jobs Investment Program.

“CEB is exactly the type of business Arlington needs as we move forward as a leader in the innovation economy,” said Arlington County Board Chair Jay Fisette. “Today’s announcement is a shining example of how the new initiatives we’ve implemented this year are increasing Arlington’s economic competitiveness and ensuring our place as a leading community for technology businesses of the future.”
at 3:01 AM No comments: