By Pierre Lussier, Jour de la Terre Québec
Talking about what happened in Montréal at 2 o'clock on Sunday, the 22nd of April, 2012, feels like describing a perfect storm touching the ground. 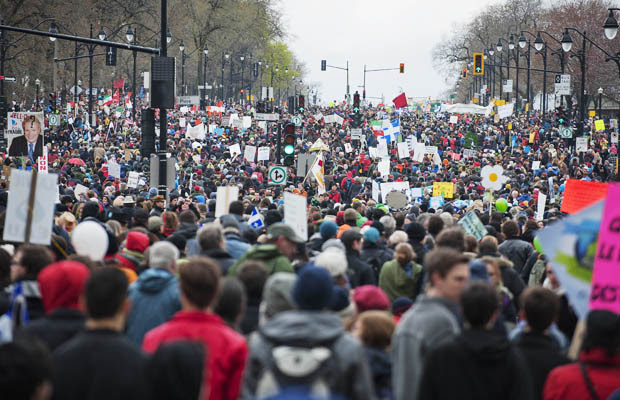 12:30pm, Place des festivals
Basically, nothing out of the ordinary seems to be going on. I've organized the rally at COP 11 and sixteen Earth Days. I should be used to this by now. The difference now is that you just know you’re never ever going to be ready. Do I feel confident? Yes, I can deal with this, make it right. How many people will it be? How many people really fit into this place anyway? 100 K, yes; 150 K, I'm not sure; 250 K, never. I have to get this TV cart out of the way. It's the third time they’ve come and parked it in the middle of the place, and so it goes “you cannot park here” “yes but I'm live in 5,” “well, we're live 24-7, so for now please move on.” This is the center of what is soon to be a sea of people. No car please. NOW. How did I get here? Must have been that girl at the rave in 1995; she looked at me and then handed something to me. Or is it when the celebrated director, Dominic Champagne (LOVE, the story of the Beatles by Cirque du Soleil, Cabaret Neiges Noirs, etc.), came into Jour de la Terre offices.
23rd of January
Dominic was very disappointed that the 2011 rally protesting Canada's withdrawal from the Kyoto protocol did not attract more participants. He was now on a mission. He professed that one day he would mobilize 100,000 people, and that day was going to be Earth Day 2012. Already on the night of the failed rally against the failing Canadian government Dominic was drafting a manifesto for the common good. What he wanted was to go further than the anti-fracking movement that he was fightingfor; and me, I was in for the number. 100,000 people, all right, let’s do it. Soon after, Dominic got all his artist friends to attend a meeting at our offices. Along came all the key environmental organizations. We did not want to do anything ordinary, we did not want to do just another rally. Dominic came up with the idea of a human tree; he could ask his friends, a choreographer from Le Cirque and André Lavallée (the chief of staff of the Montreal mayor). I proposed the place to do it. We thought that the Mount Royal mountain would be the place. Where else could be more symbolic of Montreal and of the common good? The ideas were good but not without obstacles. First, we had to figure out who's doing it and then who was paying for it. Five environmental organizations: Greenpeace, Equiterre, David Suzuki Foundation, l'AQLPA and Jour de la Terre Québec, NGOs and the three biggest unions, CSN, CSQ and FTQ formed a committee of Jour de la Terre Québec.This committee would be autonomous and responsible for everything, including finances. It would communicate as 22 April http://22avril.org/.

CLICK HERE for the rest of the insane story.
Save the earth while creating a huge crowd that blocks all traffic on a major highway and stops commerce plus creates tons of pollution and waste from all the garbage all these nuts left behind.  Yeah, all this makes sense.  And where did they all go to the bathroom?  250,000 people swarm a Canadian city to pollute the heck out of it and choke it.  Great idea for an earth day.  They have a video where they all look like a swarm of killer ants taking over a picnic.  The most anti green green movement anyone could care to see.  What other kind of bright ideas do these nuts have?  They call this sending their love to mother earth.  We call it hypocrisy.