Long vilified butter is making a comeback. Butter consumption in the US has reached its 40-year peak, according to new data from the dairy industry. The butter boom, at least in part, has been attributed to a shift in consumer preferences away from processed foods and back toward natural foods.
It has also helped that USDA began the process of banning trans fats from the American food supply last fall.1
During the past decade, Americans have increased their butter intake by 25 percent—but it's really taken off over the past five years. Butter consumption has now reached 5.6 pounds per capita, compared to 4.1 pounds in 1997.2 While butter hit its 40-year high, margarine fell to its 70-year low.
Even Unilever Foods (maker of Country Crock margarine) just added real butter to Rama, their most popular spread in Germany, in order to rescue dwindling sales.3
After decades of believing the myth that butter clogs arteries and causes heart attacks, people are now beginning to realize that partially hydrogenated vegetable oils, margarine, and shortening.
So-called "heart healthy spreads," are the culprits—not wholesome saturated fatslike butter. The now discredited "lipid hypothesis"4 is thankfully going the way of bloodletting and lobotomies. It's time to bury the myth that butter is bad for you—for good.

Disease Rates Through the Roof Since the Era of Butter Bashing

The evidence is incontrovertible: When you cut out or radically decrease the fat in your diet, you became fatter and sicker than your ancestors. Why? Because margarine and similar hydrogenated or processed polyunsaturated oils are far more detrimental to your health than saturated fat.
Besides these "fad oils," sugar is another primary co-conspirator in the destruction of your cardiovascular health. Excess dietary sugar creates insulin andleptin resistance, which can lead to obesity and inflamed arteries—which both raise your risk for a heart attack.
A review from Cambridge University, just published in the journal Annals of Internal Medicine, is the latest analysis to confirm the absolute lack of evidence that consuming saturated fat leads to heart disease. 5, 6 They also found no basis for guidelines that advise increased consumption of polyunsaturated fats to lower your cardiac risk, calling into question all of the standard nutritional guidelines related to heart health.
The low-fat and fat-free craze has been a damaging nutritional detour in the West, because removing the fat from foods opened the door for the addition of large quantities of refined sugar, sodium and other unhealthy chemicals in attempts to make processed foods taste good. Sugar, trans fats, and processed vegetable oils have created the perfect storm of disease for decades.
Authority Nutrition has assembled six graphs with side-by-side comparisons of obesity and heart disease trends with nutritional trends over time. These graphs make it to visualize how the "lipid hypothesis" has done you no favors whatsoever.7

"Between 1920 and 1960, Americans' use of butter declined from 18 pounds per person per year to four pounds, yet heart disease went from a relatively unknown condition to the number one killer. So how likely is it that butter is killing us?" –GreenMedInfo8

In Europe, The Countries That Eat The Most Saturated Fat Have The Lowest Risk of Heart Disease 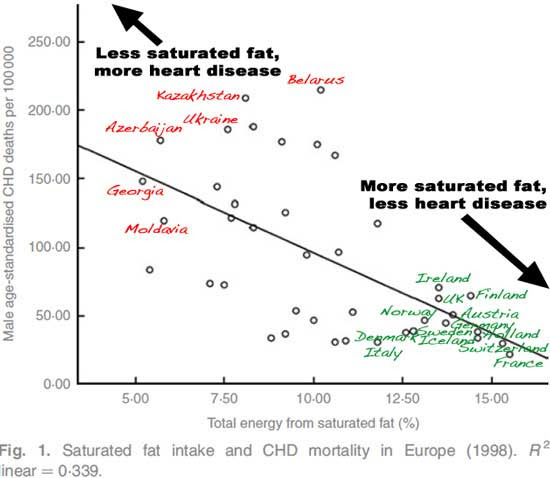 Data from: Hoenselaar R. Further response from Hoenselaar. British Journal of Nutrition, 2012.
The Obesity Epidemic in The USA Started at Almost The Exact Same Time The Low-Fat Dietary Guidelines Were Published 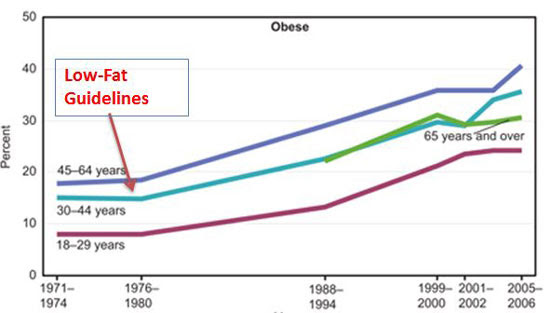 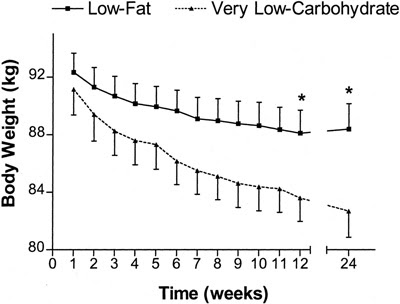 Source: Brehm BJ, et al. A randomized trial comparing a very low carbohydrate diet and a calorie-restricted low fat diet on body weight and cardiovascular risk factors in healthy women. The Journal of Clinical Endocrinology & Metabolism, 2003.
The Diseases of Civilization Increased as Butter and Lard Were Replaced With Vegetable Oils and Trans Fats 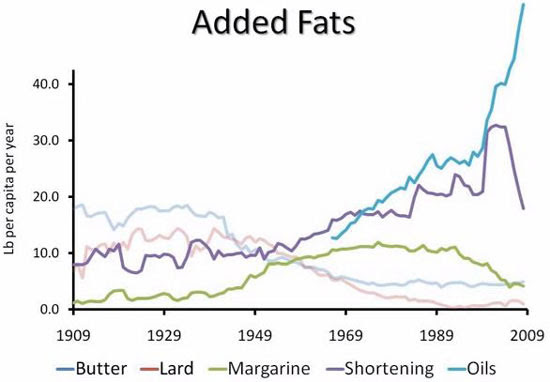 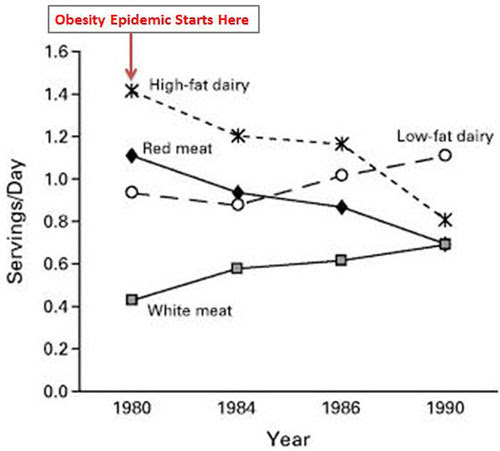 Source: Hu FB, et al. Trends in the Incidence of Coronary Heart Disease and Changes in Diet and Lifestyle in Women. The New England Journal of Medicine, 2000
In The Framingham Heart Study, Heart Disease Goes up as People Replace Heart-Healthy Butter With Toxic Margarine 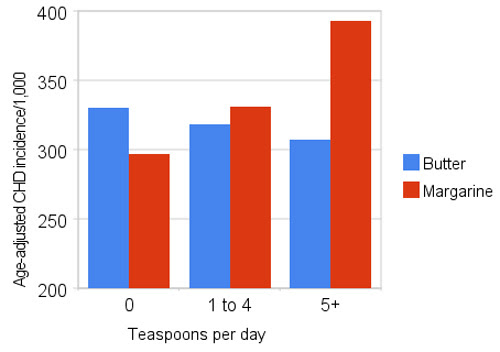 Butter Is a Health Food!

Butter has been a dietary staple of many cultures for thousands of years, with no evidence of adverse health effects. For millennia, people around the globe prized butter for its abundant health benefits, not to mention culinary appeal. Butter, especially raw organic butter from grass-pastured cows, is a wealth of nutrition and nourishing fats. Research points to the fact that butter may have both short-term and long-term benefits for your health.
A Swedish study found that fat levels in your blood are lower after eating a meal rich in butter than after eating one rich in olive oil, canola oil, or flaxseed oil.9 The scientists' main explanation is that about 20 percent of butterfat consists of short- and medium-chain fatty acids, which are used right away for quick energy and therefore don't contribute to fat levels in your blood.
The other oils (olive oil, canola, flax, etc.) contain only long-chain fatty acids. Therefore, a significant portion of the butter you consume is used immediately for energy—sort of like a carbohydrate. The primary nutrients found in butter are outlined in the table below. For more information on the health benefits of butter, refer to this classic article "Why Butter is Better" by the Weston A. Price Foundation.10

Not all saturated fats are nutritionally equal, and butter is no exception. Just like other forms of dairy, butter's nutritional value depends on how the animals are raised. For example, the fatty acid composition of butterfat varies according to the animal's diet. The very best-quality butter is raw (unpasteurized) from grass-pastured cows, preferably certified organic. The next best is pasteurized butter from grass-fed cows, followed by regular pasteurized butter common in supermarkets. Even the latter two are a healthier choice than margarines or spreads.
Beware of "Monsanto Butter," meaning butter that comes from cows fed almost entirely genetically engineered grains.9 This, unfortunately, makes up the majority of butters you typically see on grocery store shelves. Conventionally raised cows are typically fed GE corn and soy. However, some farmers fatten up their feed with additional sugar derived from GE sugar beets and cottonseed. According to Food Babe:10

"Conventional dairy cow feed is sometimes fortified with additional protein, omega-3 fatty acids and CLA from GMO rapeseed (canola) because the cows are not getting these nutrients naturally from the grass. GMO alfalfa hay is also commonly fed to cows. So basically, conventionally raised cows are almost entirely getting their food from GMOs – food that was created in a laboratory, that hasn't been tested long term, but has produced horrific results in several alarming animal studies."

Included on the list of "Monsanto Butters" are Land O'Lakes and Alta Dena. Land O' Lakes is not organic and raises its cows on antibiotics, growth hormones, and pesticide-loaded GE grain. Land O'Lakes also contributed nearly $100,000 to the "NO on I-522" lobby, the bill to label GMOs in Washington State, which is a clear statement of its position and priorities.11 Here is Food Babe's handy butter buying guide: 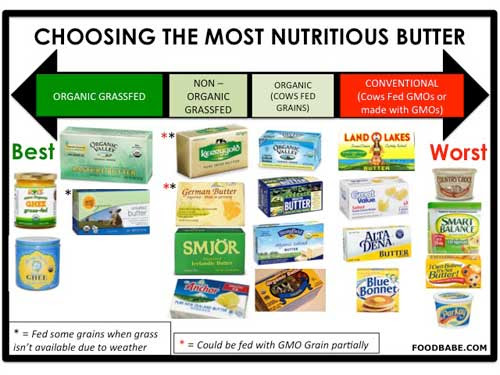 BEWARE: Many Dairy Cows Are Inhumanely and Brutally Treated

In addition to avoiding the dairy products from CAFOs (confined animal feeding operations, aka factory farms) for nutritional reasons, you may want to avoid them due to the inhumane treatment of animals that is often found in these operations. Brutal,sadistic treatment of dairy cows was captured by undercover footage at a factory farm in Ohio in 2010. The trapped animals were beaten, kicked, stabbed with pitchforks, and had their tails broken. Unfortunately, such heart-wrenching stories are much too common. These are not really farms but rather large manufacturing operations where the "machinery" is live animals and the commodity is the food they produce, existing first to make money, and secondarily to raise high quality food.
CAFO animals—typically chickens, cows, pigs and turkeys—live short and often painful lives. They exist by the thousands in cramped indoor quarters and most never see the light of day between birth and death. For all of us who love, respect, and share our lives with animals, it is disheartening to hear about animals being treated in this manner. You can enjoy butter and other animal products without supporting factory farms by buying your products from local farmers who raise their animals humanely and sustainably, on grass pastures rather than crammed into warehouses by the thousands.

How About Making Your Own Butter at Home?

Now that you've seen the scope of butter's impressive health benefits, you can see why there is no reason to avoid it. Consuming butter can help you reach your optimal fat intake. If you have insulin or leptin resistance there is a good chance you will need  upwards of  50 to 85 percent of your daily calories in the form of healthful fats. This can be reduced once the insulin/leptin resistance resolves. Most people don't consume enough healthful fats. Butter, along with other fabulous fats like avocados, nuts and coconut oil, is an essential part of a healthful diet. And everyone knows you can't beat butter for flavor!
Why not try making your own butter? It really isn't difficult. Refer to this excellent article on Positron for instructions on making your own organic cultured butter.12 If you're a real butter fan, be sure to check out the presentation "Butter through the Ages,"13 an incredibly comprehensive online exhibit that will give you more than you probably ever wanted to know about the history and composition of this fascinating ancient food.