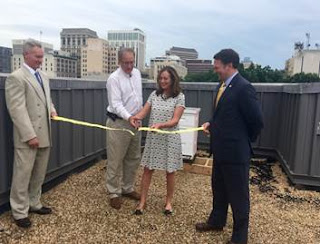 Now this is rather interesting.  The governor's office is interested in helping to save the honey bee?  They put a beehive on the top of a building.  An interesting location.  It seems to be out of the way of electromagnetic fields which is one of the concerns for the disappearance of the honey bees as well as radio signals and cell towers, pesticides, GMO's and the list from all around grows with varying research.  (My bet is more on pesticides and GMO's for the disappearances).

Blaming man made climate change on a significant part of the loss.  I simply do not buy it.  So let's also check another site to counter the official propaganda.

As shown above, GMO's EMF's and other reasons such as virus as well as genetic engineering.  Either way, let's look at what the official propaganda story from the governor's office.


RICHMOND – Earlier this week, First Lady Dorothy McAuliffe joined Deputy Secretary of Agriculture and Forestry Sam Towell and Virginia Department of Agriculture and Consumer Services (VDACS) staff to celebrate National Pollinator Week and Virginia Pollinator Week by dedicating a rooftop bee hive on the Oliver Hill Building at Capitol Square where the agency is headquartered. In addition to the rooftop bee hive, Governor and First Lady McAuliffe have installed a bumble bee box and outdoor pollinator window box on the grounds of the Executive Mansion, in an effort to showcase the need for protection of Virginia’s bee population. These steps are part of a wider effort in coordination with VDACS to demonstrate the importance of pollinators in producing our food supply and promoting environmental stewardship in the Commonwealth.

“We are doing everything we can to encourage the cultivation of bee populations to protect biodiversity in the Commonwealth,” said First Lady McAuliffe. “According to a survey done by the Bee Informed Partnership, beekeepers across the United States lost 44 percent of their colonies in the past year. Families can take small steps at their homes that will go a long way in restoring and protecting our precious pollinators – Virginia’s smallest livestock – such as planting gardens or installing window boxes. Whether you live in an urban or rural setting, every Virginian can do something to attract, protect, or increase the Commonwealth’s pollinator species.”

“I have worked with honey bees and other pollinators all of my life,” added Keith Tignor, State Apiarist, VDACS. “As a beekeeper I am grateful for all the actions Virginians of every age are taking to help protect these critical species.”

“Growing up on a farm in Pittsylvania County, I learned from my grandparents the important role that pollinators play in agriculture,” said Todd Haymore, Secretary of Agriculture and Forestry. “In my current position, I have learned to appreciate them even more given the role that the play in keeping Virginia’s agricultural economy moving forward. The work done by pollinators impacts roughly one third of the state’s agricultural production. I thank the Governor and First Lady for their commitment to Virginia agriculture in general and specifically highlighting the unique work performed by bumble bees, honey bees and other pollinators that benefit the industry.”

Governor McAuliffe declared June 20 – 26, 2016 as Virginia Pollinator Week, a time to recognize and appreciate the tremendous value of pollinators in the Commonwealth. Because pollinator species such as honey bees, bats, and other insects and birds are essential partners with farmers in producing much of our food supply in Virginia, VDACS encourages all Virginians to take positive action this summer to benefit our pollinators. Without adequate pollination services, Virginia could experience a significant reduction in its harvest of a variety of agricultural products, including: apples, alfalfa, berries, cucumbers, melons, peaches, squash, tomatoes, and pumpkins. Experts estimate that insect-pollinated plants are the direct or indirect source of approximately one-third of the human diet.

To attract pollinators to yards and gardens, Tignor offers the following suggestions:

2.      Plant a variety of flowers that bloom at different times of the year. A greater variety of plants available will attract more pollinators to a garden or landscape. Providing pollen and nectar sources throughout the year offers a food source to increase pollinator numbers and activity.

3.      Plant flowers in clumps rather than singly or in rows. The fragrance from the flowers can attract pollinators from a great distance. Clumping flowers in groups increases the intensity of the fragrance and a pollinator’s ability to locate its origin, including those that only come out at night, such as moths and bats.

4.      Select plants that are known to attract pollinators in your area. Many of these will be native plants. To determine which plants are best for attracting pollinators in your region, go to pollinator.org/guides.htm and enter your zip code for an area-specific guide.

5.      Choose flowers with a variety of colors. The color of a flower often alerts pollinators to good nectar and pollen sources. For example, butterflies are attracted to red, orange and yellow while hummingbirds prefer purple, red and fuchsia colors.

6.      Choose flowers with a variety of shapes. Butterflies and honey bees need to land before feeding and usually prefer flat, open flowers. Tubular flowers help lure pollinators with long beaks and tongues, such as hummingbirds. Guidelines on the types of flowers that appeal to the different pollinators can be found atpollinator.org/Resources/Pollinator_Syndromes.pdf.

Now this is interesting.  As we see from the governor's office, stay away from GMO plantings, do not use pesticides, even organic ones, showing that the potential reasons for the disappearance of the honey bees is in fact GMO's and insecticides which may be causing the viruses?  You be the judge.