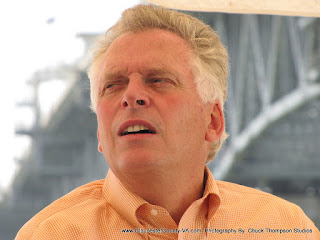 It just does not get any dumber than this.  Carbon Emissions, let's see, the stuff we breath out and trees and plants breath and change into oxygen.  So the idiot governor thinks people are getting way to much oxygen?  He has signed an executive order, without the consent of the people, to cut the oxygen levels in Virginia hence wanting to choke us all to death?

Second, where are the studies to show that Virginia has more oxygen than it needs?  The bottom line is that this is nothing more than a tax and theft of the rights of the people to conduct business without government interference.  It is putting more people into slavery.  Another real objective here folks is the raising of all costs such as electric bills, transportation costs, shipping costs, which will affect all other costs.  Here is the official propaganda from the state and his office.

The Commonwealth’s electric sector has already made significant strides towards a reduced environmental impact; between 2005 and 2014, carbon emissions from Virginia’s electrical generators fell by 21%. Currently the sector accounts for approximately 30% of the state’s overall carbon emission. The workgroup will focus on how to continue this trajectory in a way that makes clean energy a meaningful part of Virginia’s energy portfolio.

“Increasing Virginia’s emphasis on clean energy generation will help grow Virginia’s economy by reducing carbon emissions, ensuring our Commonwealth’s long-term energy security and creating the next generation of good jobs in this emerging sector,” said Governor McAuliffe. “Many of the largest employers on the globe have made it clear that the availability of clean energy is a key part of their decision making process when it comes to new jobs and investments. To continue attracting competitive and innovative businesses, we need to invest in a 21st century energy policy to ensure our grid is reliable, affordable, and clean.”

The newly convened workgroup will receive input from a diverse range of perspectives including scientists, energy experts, business leaders, and environmental advocates. The Secretary of Natural Resources will be charged with developing a regulatory strategy to reduce carbon pollution in Virginia’s energy sector while realizing opportunities to lead in the new clean energy economy.

“Global warming and sea level rise driven by carbon emissions pose a significant threat to Virginia’s environment, economy, and way of life,” said Virginia Secretary of Natural Resources Molly Ward. “The energy choices we make today will be felt for generations to come, so it’s worth thoroughly reviewing all options under Virginia’s existing authority. This workgroup’s report will be a jumping-off point for future conversations about climate change and clean energy in the Commonwealth.”

The group’s recommendations will build upon the McAuliffe administrations existing efforts to improve energy efficiency and transition the Commonwealth to carbon-neutral energy sources. Executive Order 31 directed state agencies to implement energy efficient practices, protecting Virginia’s environment and bottom line. The governor established the Solar Energy Development Authority to catalyze growth in this rapidly-expanding market. Additionally, Governor McAuliffe set new procurement standards for state agencies, requiring eight percent of the energy they consume to be generated by renewables within the next three years.

The full text of Executive Order 57 is below:

Executive Order Number 57
Part I – Importance of the Initiative

Though our coastal communities may be the first to witness the effects of climate change, the risks presented by increasingly fierce storms, severe flooding, and other extreme weather events are not confined to a single geographic area. Neither are their causes. The economic implications are significant, and we must do all we can to protect our critical military infrastructure, our ports, our homes, and our businesses. It is only by acting together with common purpose that the Commonwealth can effectively adapt and stave off the most severe consequences of climate change.

One key step forward is to continue with a strategic goal of reducing carbon emissions. Virginia has already made meaningful strides – between 2005 and 2014, Virginia reduced its carbon emissions from power plants by 21 percent. However, the electric sector is still responsible for approximately 30 percent of the carbon dioxide pollution in the Commonwealth. Moreover, electric companies are including carbon regulation projections in their long-term plans. The electric sector is changing rapidly through increasing reliance on low and zero carbon resources. As such, it is vital that the Commonwealth continue to facilitate and engage in a dialogue on carbon reduction methods while simultaneously creating a pathway for clean energy initiatives that will grow jobs and help diversify Virginia’s economy.

Accordingly, by virtue of the authority vested in the Governor under Article V of the
Constitution of Virginia and under the laws of the Commonwealth, I hereby direct the Secretary of Natural Resources to convene a Work Group, chaired by the Secretary, to study and recommend methods to reduce carbon emissions from  electric power generation facilities. The Secretary shall receive input from interested stakeholders.

Such methods shall align with the Virginia Air Pollution Control Board’s power to promulgate regulations abating, controlling and prohibiting air pollution throughout or in any part of the Commonwealth.

Effective Date of the Executive Order

This Executive Order shall be effective upon its signing and shall remain in full force and effect for one year after its signing unless amended or rescinded by further executive order.

Given under my hand and under the Seal of the Commonwealth of Virginia this 28th Day of June, 2016.
at 9:52 PM