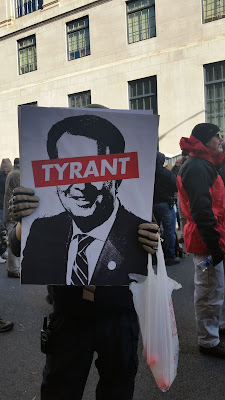 The Story of Tom R.

Let me tell you a story about Ralph Northam...

Back when our son, Christian, was still alive and going to CHKD, it was unknown what was going on with him. Drs. were not sure if it was metabolic or neurological. We decided to have him checked, and made an appointment with Dr. Northam.


It was a cold, rainy morning in February, and on our way to the office visit, roads and bridges were starting to freeze over. We had to drive slow, and we were now running late because of all the accidents. Tammy called to let them know we were going to be late and the receptionist asked if we wanted to reschedule. I said "NO, we waiting 3 months for this appt. and I want answers! We will make it there!"

Two hours later, we finally made it there. Anxious to hear what Dr. Northam was going to do, it quickly became a big disappointment. My rapid heart beat nearly stopped, and my stomach sank. The room felt as cold as it did outside, when this selfish bastard just observed our son, and stated, "well, it looks like he may be showing signs of cerebral palsy.... we will just have to wait and see what happens".... As Tammy and I left the building, we looked at each other, and were like, "that's it? Wait and we will see what happens?" He didn't even bother running any tests or even schedule future appts. to follow up with us.

Several months later, as I was getting Christian ready for bed, he started twitching which I immediately knew something wasn't right and called 911 and also Tammy at her work. The EMS quickly took him to CHKD, and Christian was having multiple seizures. They put him a drug induced coma, and we stayed at the hospital for a month as they couldn't stop the seizures. We later had him transferred to MCV in Richmond, where we stayed another 1 1/2 more months. Christian's seizures never stopped and was in a coma for 2 1/2 months before he passed away...

This heartless piece of shit could have possibly saved his life if he would have taken the time to run tests and find out what was really going on with him. There are also several complaints from other parents where similar things happened with their children. Northam probably already knew he was leaving the medical field and was going to go into politics, so he simply just didn't care. By the way, Christian never had cerebral palsy.

There is so much more things that went on at CHKD while we were there that I will be releasing slowly but surely. So much neglect and careless mistakes that they made, you folks will be shocked what really happened to Christian! I WILL NOT KEEP SILENT ANY LONGER AND CHKD WILL BE EXPOSED! THEY CANT KEEP ME QUIET ANY LONGER!

I’ve had dealings with him to at CHKD years ago. He didn’t like that I went over his head to a supervisor, so he closed the door to come in and talk to me very close to my face asking me if I reported him to his supervisor. I felt like he was trying to bully me. My daughter was sleeping as she was an very little , and my husband was not around. He was confronting me. Not very professional and definitely Very creepy guy. I’ll never forget it.

He would not give me a cardiology consult, and I was worried that my daughters heart was really beating very hard and fast. I went above him to the hospital chief.

I would later learn that she had cardiac issues and that she ended up going into VTACH and is on cardiac meds to this day.

The names of these individuals have been changed to protect their true identity.  These are their opinions of their dealings with Dr Ralph Northam, now Governor Ralph Northam.  I can only guess that he was on his way out as being a doctor and probably about to lose his license and figured he might as well go into politics?  Either way, this guy's history isn't at all clean in any area.  He is lazy, a bully, afraid of people with guns or who can stand up for themselves.  He is evil.  Plain and simple.  He will go down in history as the worst governor anyone anywhere has e
at 8:04 PM