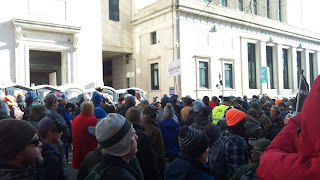 (By:  Chuck Thompson)
Governor Ralph Northam in his attempt to divide the people of the great Commonwealth of Virginia has failed in doing just that.  Instead, he has started a grand uniting of "We The People" with all kinds of so called hate groups.  Yes folks, Antifa was there, Black Lives Matters were there, even the Black Panthers were there.  And we all got along just fine.  What we are now learning is that we have so much in common and that the main stream media has been lying to all of us in their effort to keep us all divided and away from what is really going on in politics.

What we are also seeing coming from the main stream media can only be called a total melt down as they are trying every trick in the book to make this very peaceful event look bad.  Folks, this event was amazing.  All those guns and no one was injured.  Not one person caused a single issue.  None of the so called hate groups tried anything.  In fact, they shared with us how they are getting bad press the way we are seeing ourselves getting bad press.  How dare we demand our government respect our unalienable rights.  There were also white supremacist groups there.  So what?  They have a 1st amendment right like everyone else and they did not try to start anything.  They were all very respectful.  Also, the Capitol Police told us the numbers were between 50,000 to 70,000 people at this event.  The police stated to us that they are with us and we have seen the State Police memo to the legislators that they refuse to comply with tyranny.

The media is trying to portray the event as white nationalists, or white supremacists, for which I have shared photos online already proving this wrong.  They are saying everyone was dressed in camouflage and carrying big scary guns and bazookas.  Look at the picture above, where are they?  Were some there?  Yes.  So what?  It's the fashion nazi's making the claim that they didn't like it.  Other claims is that the city was flooded with rebel flags.  I didn't see any and I was there all day.  Others I was with and others I know who where there didn't see any either.  So who made up that story?  The left call us crazy because we will not let a bunch of sociopaths attempt to take away any of our "GOD Given Rights".  No man or woman can take those rights away no matter what these nazi nuts in the Capitol may think.  Even the various police departments from all over the state are telling these kooks they will not comply.  Is it stopping or even slowing down the communist democrats?  Not in the least.  They already believe you have no rights.  None.  They will tell you what you can and can not do.  They already believe themselves to be our dictators.  Our benefactors.  Well I for one will not submit.  I will not capitulate.  I will continue this fight to my death.  We can not trust the main stream media.  They are showing they are the enemy of "We The People".  We can not trust the democrat party.  They are proving they are the enemies of "We The People" and they are communists who want to dictate our lives to us.  They are very violent but when force comes at them they run and hide.  They are cowards.  They call us crazy because we dare to protect our rights. 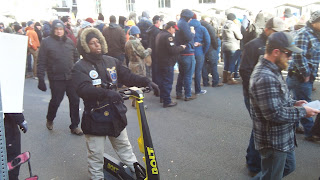 We have a number of options.  The militia scares these clowns.  The militia is not illegal as they try to lie to you otherwise.  The militia is a Constitutionally guaranteed in both our United States of America Constitution as well as our Commonwealth  Constitution.  Folks, everyone needs to register to be a part of the militia.  We are all part of the unorganized militia now, but we need to start registering and start acting.  https://www.nationallibertyalliance.org/militia  Click the link and look at all of the information.  Join our phone calls every Monday night starting at 9:00 pm.  The information for calling in is on the website.  Take action.  Stop being a sideline commentator.  Become a part of history.  Make someone proud of you.  The militia is not paramilitary.  We will be joining with each area's Sheriff's department to work along side of them should they need us.  We will be registering with the Governor's office and with Congress of these United States of America.  We will only follow Constitutionally lawful orders.  That's what makes us 100% legal and not paramilitary.  Act now.
at 8:44 PM