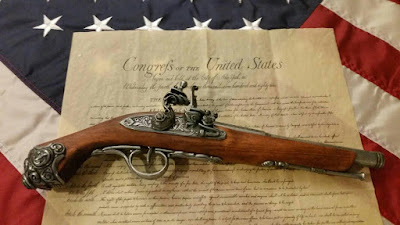 Section 1. That all men are by nature equally free and independent and have certain inherent rights, of which, when they enter into a state of society, they cannot, by any compact, deprive or divest their posterity; namely, the enjoyment of life and liberty, with the means of acquiring and possessing property, and pursuing and obtaining happiness and safety.

Section 2. That all power is vested in, and consequently derived from, the people; that magistrates are their trustees and servants and at all times amenable to them.

MAG'ISTRATE, noun [Latin magistratus, from magister, master; magis, major, and ster, Teutonic steora, a director; steoran, to steer; the principal director.] A public civil officer, invested with the executive government of some branch of it. In this sense, a king is the highest or first magistrate as is the President of the United States. But the word is more particularly applied to subordinate officers, as governors, intendants, prefects, mayors, justices of the peace, and the like.

Section 3. That government is, or ought to be, instituted for the common benefit, protection, and security of the people, nation, or community; of all the various modes and forms of government, that is best which is capable of producing the greatest degree of happiness and safety and is most effectually secured against the danger of maladministration. And that, when any government shall be found inadequate or contrary to these purposes, a majority of the community has an indubitable, inalienable, and indefeasible right to reform, alter, or abolish it, in such manner as shall be judged most conducive to the public weal.

Section 4. None of mankind is entitled to exclusive or separate emoluments or privileges from the community, but in consideration of public services; which, not being descendible, neither ought the offices of magistrate, legislator, or judge to be hereditary.

Section 5. That the legislative and executive powers of the state should be separate and distinct from the judiciary; and that the members of the two first may be restrained from oppression, by feeling and participating the burdens of the people, they should, at fixed periods, be reduced to a private station, return into that body from which they were originally taken, and the vacancies be supplied by frequent, certain, and regular elections, in which all, or any part, of the former members, to be again eligible, or ineligible, as the laws shall direct.

Section 6. That elections of members to serve as representatives of the people, in assembly ought to be free; and that all men, having sufficient evidence of permanent common interest with, and attachment to, the community, have the right of suffrage and cannot be taxed or deprived of their property for public uses without their own consent or that of their representatives so elected, nor bound by any law to which they have not, in like manner, assented for the public good.

Section 7. That all power of suspending laws, or the execution of laws, by any authority, without consent of the representatives of the people, is injurious to their rights and ought not to be exercised.

Section 12. That the freedom of the press is one of the great bulwarks of liberty, and can never be restrained but by despotic governments.

Section 13. That a well regulated militia, composed of the body of the people, trained to arms, is the proper, natural, and safe defense of a free state; that standing armies, in time of peace, should be avoided as dangerous to liberty; and that in all cases the military should be under strict subordination to, and governed by, the civil power.

2. Relating to any man as a member of a community; as civil power, civil rights, the power or rights which a man enjoys as a citizen. (Webster's 1828 Dictionary)


Section 14. That the people have a right to uniform government; and, therefore, that no government separate from or independent of the government of Virginia ought to be erected or established within the limits thereof.
Section 15. That no free government, or the blessings of liberty, can be preserved to any people but by a firm adherence to justice, moderation, temperance, frugality, and virtue and by frequent recurrence to fundamental principles.
Section 16. That religion, or the duty which we owe to our Creator, and the manner of discharging it, can be directed only by reason and conviction, not by force or violence; and therefore all men are equally entitled to the free exercise of religion, according to the dictates of conscience; and that it is the mutual duty of all to practise Christian forbearance, love, and charity toward each other.

It's time for something that has never been considered before.  An in state Constitutional Convention.  How is this done?  One representative from each county, city and or town is sent to a convention meeting place to look at the codes being considered and or passed in Richmond, Virginia and debate if they exceed the Constitution of the Commonwealth.  If any of them are in fact found to be in violation of the Commonwealth Constitution then they can be abolished by the convention.  There are no checks when the state legislators go to far.  Most of us here in Virginia believe our legislators have gone to far and have brought about these radical new changes against the will of "We The People".  This is a more than fair way to put in checks and balances without burdening our courts.  After all, we the people are the one's who created our government and Constitution as explained by Chief Justice John Marshall of the Supreme Court and reiterated by Chief Justice Joseph Story and others. That means the people are the final arbitrators of all the laws we will follow or not.  We don't have to wait for court decisions because if we do not think the court was right, we still have the ability to override the court being the final arbiters.

How would this work?  The same way it would work for the states and the Federal Government.  Two thirds of the localities have to agree in order to override what the Legislators may put forth and or vote in and or what gets passed into Virginia Codes.  Amendments to our Commonwealth can be added to ensure nothing like this ever happens again and should it, that the Governor is easily arrested for such.

I for one believe "We The People" need to form militia's in every locality throughout the Commonwealth and every state for that matter.  https://www.nationallibertyalliance.org/militia  That can be done by clicking the link here.  Another option we have here in Virginia is the VEXIT option.  Vexit would allow Virginia localities to leave Virginia and become a part of the state of West Virginia.  That is a legal option thanks to a loophole that has never been closed from the Civil War.

Our last option that I see I do not like in the least.  Civil War 2.  I am averse to war of any form.  The issue with a Civil War 2 is lack of leadership.  No clear enemy.  Once the immediate threat is eliminated, there will still remain unclear immediate threats.  War is the biggest and fastest money maker out there folks and it would radically change the United States of America forever.  It's not a good option.  The left wins no matter what if war were to be considered an option.  Most people do not get this.

Now getting back to the concept of an in state Constitutional Convention.  We already have the precedent to start this with all of the 2A sanctuary localities throughout the Commonwealth now.  The counties have spoken but our legislators are refusing to listen.  These issues could be tied up in courts for years all the while our Commonwealth is destroyed from within while waiting.  I don't like that option.  So let's get this done.  Contact your local Board and get them to read this article or print this out for them.  Spread the word.  Not only can it work here in Virginia.  It can work in any state.  Stop complaining and take action.  No one likes a sideline commentator that does nothing but complains.  You have to take action or you deserve what you get.
at 8:51 PM