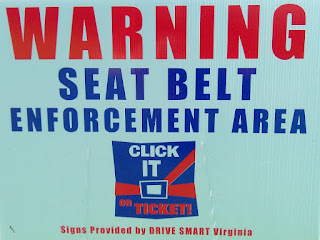 First, who has given the state the right to tell people they must wear a seat belt?  Yeah, it's their law and who cares?  If you want to accept their premise, then send them a bill for compliance of their order.  It's not a valid law as it has no place in the Constitution of either the Federal Government nor State Government.  Those are arguments in themselves and not the real intention of this article but I had to sound off anyway.

As the picture shows, our highways and streets have been littered with these signs throughout the state.  Under what authority did these signs get put up?  If you own a business and put signs out like this, you will notice them missing within a few days as VDOT is instructed to remove them and throw them out.  If you keep putting up signs like this, you may get in a great deal of trouble.  If you can get in trouble for putting signs like this up, what makes some entity such as Drive Smart Virginia think they are above the law?

Members of the Board of Directors include leaders from private industry, state and federal government, law enforcement, military, media, and traffic safety organizations.

The littering of these signs say more than we are trying to promote safety.  Promoting safety?  Nice, but I do not buy this crap.  It actually says, we are part of the nanny state; centralist's who do not think you have any rights other than what we tell you you have.   We do not have to follow the laws we put on you.  We are watching you and if you do not do as we say, we are going to punish you.  Who paid for these signs?  Well, you did.  You paid for them through your insurance premiums.  And the knuckleheads who head up the insurance companies use your money against you.

In my own opinion, I do think that buckling up is a good idea in general.  But if you are going to demand I do it, then I am less likely to even consider it and not do it.  Drive Smart Virginia is part of a growing problem we are seeing throughout this country.  Not part of any solution.  Throw them out.  Switch to an insurance company that does not support these nanny state tactics and littering of our highways and roadways against state and local laws.  They seem to have no issue violating the laws, why support them?  And talk about environmental issues with these signs?  The costs to make them and then they are littering all over the state with impunity?  At least the environmentalist's should be up in arms over this and one has to question if Drive Smart Virginia bothered to do an environmental impact study before making these signs.  Are they in violation of the EPA?  A complain to the EPA would answer that question fast.
at 9:26 PM No comments: 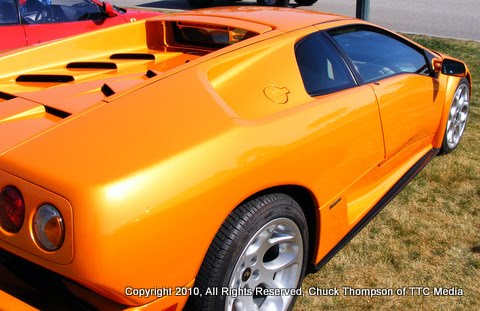 Richmond, VA – Governor Terry McAuliffe today joined more than 100 state and local law enforcement, and traffic-safety advocates at the State Capitol to officially kick off the Memorial Day and summer traffic and tourism season. The morning’s press event is one of four being held statewide Tuesday to introduce the Commonwealth to Drive to Save Lives, the nation’s first-ever traffic-safety campaign of this magnitude. The nationwide initiative is two-fold: to reduce traffic deaths by 15 percent in 2014 across the country and within the Commonwealth; and to improve officer safety on our highways.

The Drive to Save Lives campaign is a united effort by state police and highway patrol leaders, police chiefs and sheriffs to reduce highway crashes and fatalities. More than 33,000 deaths occur each year on our nation’s roadways. Highway fatalities rank as one of the top 12 causes of death in the United States and it is the leading cause of death among teens.

“Virginia is proud to join this nationwide traffic-safety program as a way of making our highways as safe as possible,” said Governor McAuliffe. “The Commonwealth is averaging about 30 fewer traffic deaths this year in comparison to last year. But even one death is one too many, which is why the active participation of all motorists living, working and visiting Virginia is so invaluable to the campaign’s life-saving success.”

In 2013, Virginia reported 741 deaths resulting from traffic crashes. To achieve the campaign’s 15 percent reduction in traffic fatalities in 2014, there must be 111 fewer crashes and deaths on Virginia’s highways.

“Never before has the nation’s state police and highway patrol agencies teamed up for such a comprehensive enforcement initiative,” said Col. W. Steven Flaherty, Virginia State Police Superintendent. “The goal to save 111 lives on Virginia’s highways is an ambitious, but necessary one. We are simply asking the public to drive to save lives, not take them.”

In order to decrease highway fatalities in Virginia, state troopers, police officers and deputy sheriffs are leading a sustained effort over the course of the year that is data driven; focuses on the use of seat-belts and speeding; and targets impaired and distracted driving. The campaign also includes enforcement actions against the unsafe driving behaviors of the operators of large trucks and buses.

“Law enforcement officers across the Commonwealth work every day to change the high-risk behaviors of motorists that lead to crashes,” said City of Charlottesville Chief Tim Longo, current president of the Virginia Association of Chiefs of Police Board of Directors. “Hopefully uniting with our state and local counterparts through education and awareness, partnerships, and high-visibility traffic enforcement, we can have an even greater and positive impact on the motoring public.”

“Most traffic crashes, injuries, and deaths are preventable when drivers and passengers buckle up, drive the speed limit, don’t drive distracted, and never drink and drive," said City of Bristol, Va., Sheriff Jack Weisenburger, current president of the Virginia Sheriff’s Association Board of Directors. " This is a message we’ve heard time and time again, but is still worth repeating. Now we’re just asking drivers and passengers to put them into action.”

Governor McAuliffe also today unveiled a new public service announcement promoting Virginia’s “Move Over” law, which can be viewed at https://www.youtube.com/user/vspvideos.  (Posted Below).


In Virginia, the law requires drivers to change to another travel lane or, when not able to, to cautiously pass vehicles equipped with blue, red or amber lights and stopped on the side of the road.The Virginia General Assembly this past session also passed Senate Joint Resolution No. 102, which designates June as “Move Over Awareness Month” in the Commonwealth (http://lis.virginia.gov/cgi-bin/legp604.exe?141+ful+SJ102ER).

“Reducing the number of traffic crashes isn’t the only reason for this nationwide campaign,” said Governor McAuliffe. “We also have a shared responsibility to help protect the lives of public safety professionals across the Commonwealth. Virginia’s local and state law enforcement will be doing their job to make your summer travels as safe as possible. In return, do yours. Move over for them. Drive to save lives. Let’s finish 2014 with fewer crashes, fewer public safety professionals injured or killed on the job, and hopefully, 111 lives saved in Virginia.”