The above is an audio file clipping made after about 9 minutes into the audio.  The file is Animal Control file DW_C0152.  It is a very small clipping that under normal circumstances most people dismiss as mere chatter background noise.  I repeat the clip 9 times in the above video.  What you hear are chopped up voices.  These are remnants from splice-outs.  Evidence that this recording is in fact altered.  Now I can show anyone in Gloucester County that what the courts are sitting on is in fact altered evidence.  I can use their files and show this all to them with no tricks at all.  In fact, I would welcome that challenge. This is a screen shot image of the working area where I am deeply auditing the audio file.  From the clip above, this is the image used in that video. 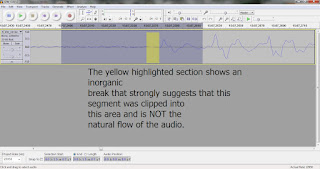 This picture pretty much says it all.  Again, a screen shot from my working area on this audio file.  You can click on any of the images to enlarge them. 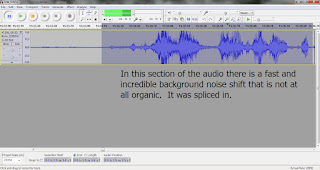 When listening to this section of the audio, there was a very drastic background inorganic noise shift that proved was a direct marker that this part of the audio was spliced in. 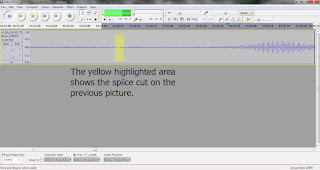 In the yellow highlighted box above, we have an inorganic break in the noise spectrum that is evidence of a splice. 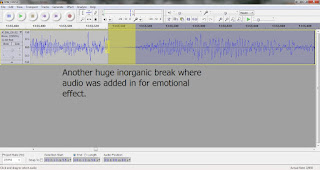 In this section, the voice patterns had an inorganic sound to them.  So we opened the recording visuals on an expanded mode.  We found an inorganic splice in.  The voice record has also been tampered with.

Someone somewhere went through a lot of trouble to doctor this recording.  I have found tons of evidence like this throughout the entire recording.  This is just a mere sample of what is here.  Did someone in Gloucester County guess that no one would ever figure this out?  This isn't rocket science.  It is technical yes, but not rocket science.
at 7:40 PM