To date we have two highly questionable audio files provided by the county and used in a Gloucester County Court.  We have a 911 Dispatcher's testimony that does not match up to the 911 call.  We have an Animal Control officer who has testified that his audio recording, DW_C0152 is a true and accurate account of the days events yet as we continue to look real close at it, we just do not see how that could begin to be possible.  We have only grazed the evidence of Deputy Sheriff Sgt Paul Emanuele and this is where we are going to pick up today.

If you have been following this story, below is a four minute and thirty second audio, made by Steve Baranek of Animal Control.  On the audio you hear Steve say that Paul Emanuele has just been made Sergeant.  What it takes to make it to that rank is very tough and you have to be a real sharp individual.  You not only have to qualify for the position, you also have to take and pass tests for the position.  It's not something that's just handed to someone.  So it would only be fair to give credit where credit is due.  We say that it is a very fair evaluation that Sgt Paul Emanuele is a very sharp person.

So let's again revisit his incident report for the events of May 4th, 2010 along with his involvement. 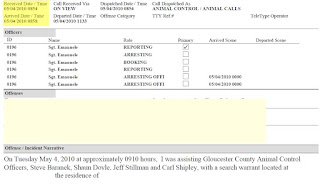 Now right above is Virginia law showing who has the power to do what.  Only a Sheriff, Deputy Sheriff or a Police Officer has the power to conduct the search.  Not Animal Control.  Looking above again at Sgt Paul Emanuele's own report, he was dispatched to this location and did not have previous orders to be there to serve a search warrant.  His own statement is that he was there to assist Animal Control, not head the search according to Virginia Law.  Is Gloucester County really going to try and argue that Sgt Emanuele made a mistake on his report?  Remember, this guy just made Sargent so you know he is very sharp. We believe this is Proof once again that there was no search warrant in place at the time both Animal Control Officers were there and the Gloucester County Sheriff's office was there.  (We now know by what Gloucester County sent us, there was no valid search warrant at that time).

In our opinion, Sgt Paul Emanuele got caught up and sent into the middle of something very nasty.  He was doing the best he could in trying to produce something that matched the official story that the powers in Gloucester wanted told, and at the same time keep himself out of the middle of it all.  He has had to walk a very thin tight rope.  You have to feel sorry for this guy.