Anti Federalist Papers No. 27 – The Use Of Coercion By The New Government (Part 2) 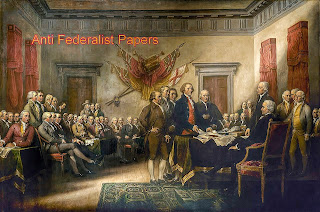 The humble address of the low-born of the United States of America, to their fellow slaves scattered throughout the world - greeting:

Whereas it hath been represented unto us that a most dreadful disease hath for these five years last past infected, preyed upon and almost ruined the government and people of this our country; and of this malady we ourselves have had perfect demonstration, not mentally, but bodily, through every one of the five senses. For although our sensations in regard to the mind be not just so nice as those of the well born, yet our feeling, through the medium of the plow, the hoe and the grubbing ax, is as acute as any nobleman's in the world. And, whereas, a number of skillful physicians having met together at Philadelphia last summer, for the purpose of exploring, and, if possible, removing the cause of this direful disease, have, through the assistance of John Adams, Esq., in the profundity of their great political knowledge, found out and discovered that nothing but a new government, consisting of three different branches, namely, king, lords, and commons or, in the American language, President, Senate and Representatives - can save this, our country, from inevitable destruction. And, whereas, it has been reported that several of our low-born brethren have had the horrid audacity to think for themselves in regard to this new system of government, and, dreadful thought! have wickedly begun to doubt concerning the perfection of this evangelical constitution, which our political doctors have declared to be a panacea, which (by inspiration) they know will infallibly heal every distemper in the confederation, and finally terminate in the salvation of America.

Now we the low born, that is, all the people of the United States, except 600 thereabouts, well born, do by this our humble address, declare and most solemnly engage, that we will allow and admit the said 600 well born, immediately to establish and confirm this most noble, most excellent and truly divine constitution. And we further declare that without any equivocation or mental reservation whatever we will support and maintain the same according to the best of our power, and after the manner and custom of all other slaves in foreign countries, namely by the sweat and toil of our body. Nor will we at any future period of time ever attempt to complain of this our royal government, let the consequences be what they may.

And although it appears to us that a standing army, composed of the purgings of the jails of Great Britain, Ireland and Germany, shall be employed in collecting the revenues of this our king and government, yet, we again in the most solemn manner declare, that we will abide by our present determination of non-resistance and passive obedience - so that we shall not dare to molest or disturb those military gentlemen in the service of our royal government. And (which is not improbable) should any one of those soldiers when employed on duty in collecting the taxes, strike off the arm (with his sword) of one of our fellow slaves, we will conceive our case remarkably fortunate if he leaves the other arm on. And moreover, because we are aware that many of our fellow slaves shall be unable to pay their taxes, and this incapacity of theirs is a just cause of impeachment of treason; wherefore in such cases we will use our utmost endeavors, in conjunction with the standing army, to bring such atrocious offenders before our federal judges, who shall have power, without jury or trial, to order the said miscreants for immediate execution; nor will we think their sentence severe unless after being hanged they are also to be both beheaded and quartered. And finally we shall henceforth and forever leave all power, authority and dominion over our persons and properties in the hands of the well born, who were designed by Providence to govern. And in regard to the liberty of the press, we renounce all claim to it forever more, Amen; and we shall in future be perfectly contented if our tongues be left us to lick the feet of our well born masters.