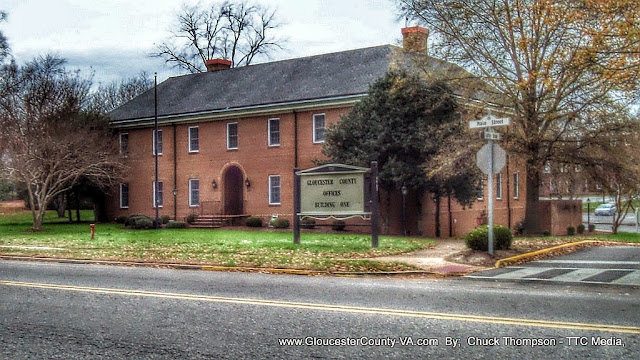 Are Gloucester County officials trying to harass us?  Are they attempting to break the law in order to force us to comply with some hidden agenda they may have of trying to silence us?  We are going to show you a letter county officials recently sent to us and the response back.  Then we are going to show how they obtained access to private property with the use of a highly questionable warrant in debt for some person who does not live on this property and has not been on this property for over 5 years.

Above is a copy of the letter sent to CRF Ventures LLC.  This is a 4 page document.  The first two pages contain the alleged county complaint and the last 2 pages are CRF Ventures LLC's response to the county.  Now how did this all come about? 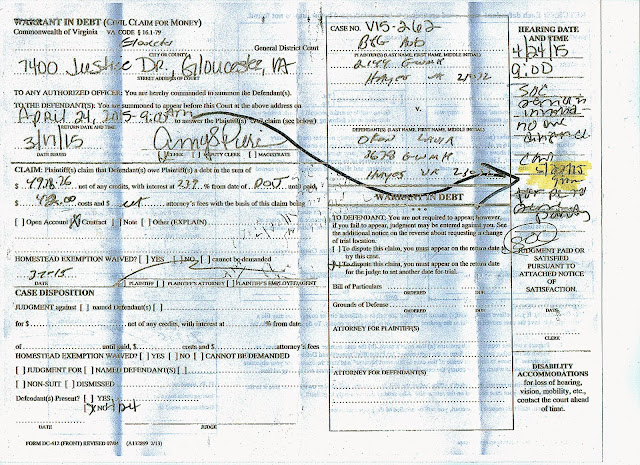 The above is a copy of the Warrant in Debt that a Sheriff's deputy had that he used to intimidate some commercial tenants on the property stating they had to let him onto posted private property because he had this warrant to serve.  He told them, according to their own words, that he would charge them with obstruction of justice, if they did not let him onto the property.

Here is a major issue.  The person on this warrant, does not and has not lived on this property in over 5 years.  That in and of itself is bad enough, but it gets worse.  The date this was attempted to serve this warrant on the property was two days after the court date listed on the warrant.  There is an arrow to show that the case was being continued on May 22nd 2015 at 9:00 AM in the General District Court.  But the question must be asked.  Where was the original warrant served before the first court date of April 24th, 2015?  It was not served anywhere on anyone on this property.  So why all of a sudden was it attempted to be served on April 26th, 2015 on this property?

We gave the deputy a very difficult time as we had told him that there was no one here by that name and that he was in fact trespassing on the property.  He said he did not see a sign that said no trespassing.  He drove right by a very large sign that states such and has been there for years.

Deputy John Doe threw the warrant out his vehicle window at me and said I was served.  He served me knowing full well I can not be mistaken as a female.  But he must be legally blind and he is driving on the roads?  So if the source of the complaint came from Deputy John Doe, it was not valid.  I complained to Sheriff Warren and also explained to Sheriff Warren that his deputy did not know how to conduct a proper service as the deputy failed to sign the back of the Warrant as required by the rules of the court.  (An indication that the Warrant was possibly a fraud just to get on the property?)

Also, Deputy John Doe, throwing the warrant out his window at me, and it landing on the ground, he littered on private property.  After Deputy John Doe left I contacted Sheriff Warren as already stated and he had another Deputy come out and pick up the original warrant that Deputy John Doe came on the property with.  But not before I made multiple copies of it front and back.

Deputy John Doe also threatened me with charges of Obstructing Justice.  I know what it lawfully takes to obstruct justice and was not committing any such act, so I told Deputy John Doe he had better look up the code and make sure he fully understands it.  He then threatened to conduct an illegal search and seizure on private property without a warrant to do such.  You bet I gave this guy a very hard time.  So it was not long afterward that the County complaint came in and that looks like its in retaliation to these events of Deputy Jon Doe.

What was the threat of illegal search and seizure?  He said he was going to run a plate on a vehicle in our driveway to see if the name for the owner of the vehicle came back as a match for the name on the warrant.  (No it did not).  Did he conduct that violation?  I can only imagine that he did.  I can not prove it without records from the Sheriff's office.  I trust that Darrell Warren has taken care of retraining this deputy or getting rid of him.

Had the name of the owner of the vehicle actually matched, then I would have been possibly guilty of obstructing justice.  If the person actually lived somewhere on this property and I did not inform Deputy John Doe of such, then I may have been guilty of obstructing justice.  Without those two facts, I was being threatened by an armed thug after he was told that the person named on the warrant did not reside here.  That in my book is criminal behavior by someone who is charged with holding higher standards of conduct and is being paid to serve us, not threaten us.