The most Expensive Spirit Ever Produced In Virginia, 8 Shires Jamestowne 1608 Single Malt Whiskey At $1,195.00 Per Bottle 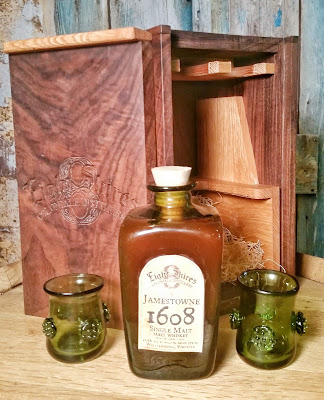 What is the most expensive spirit ever produced in Virginia?  8 Shires 1608 Single Malt Whiskey at a price tag of about $1,195.00 before tax.  So what makes this release so darn expensive?  The story behind this release is a very long one that is best experienced at the 8 Shires Coloniale Distillery in Williamsburg, but we are going to touch on a good amount of it here.  Back some years ago, the archeologists at Jamestown unearthed a well on Jamestown island that they estimated to have been capped back in 1608.  The well was no longer producing water.  When the archeologists uncapped that well, they found roughly 20 gallons of water at the bottom of the well.  They recovered the water and set it aside trying to figure out what to do with it.

One of the archeologists is a brewer of beer, so he decided to try and make a special beer with some of the water.  It didn't come out very well.  With 10 gallons left, the archeologists still wanted to see something done with it.

Enter Dr William Dodson, owner of 8 Shires Coloniale Distillery in Williamsburg.  After Dr Dodson was giving a lecture in town, the archeologist who had attended his lecture went up to meet him and told him about their find and that they still had 10 gallons of water left and did he have any ideas on what to do with it?  Dr Dodson knew exactly what to do with it.  Dr Dodson said, let's recreate the first distillations done in Virginia, aka North American continent and we will add this water into the release making it a very special limited edition.  This water is 412 years old now.  It was tested and is free of any contaminants.

Based on research, it was determined that Single Malt whiskey was the most likely base for spirits in Jamestown at that time period.   Dr Dodson set out to find a malt house in England that was in business during the Early 1600's and is still in business today.  He found one.  So the malt was brought in from England to make the Single Malt.  The next question, what kind of still did they use?  The archeologists were able to answer that having unearthed a glass alembic still.  So now the mission was to have several glass alembic still heads recreated so as to produce an authentic time period distillation.  Corning Glass works in New York State covered that.  They hand blew 5 period pieces.

Now, how was the spirit collected, into what kind of vessel and how long would it might have sat?  The research shows the most likely vessel for collecting the distilled spirits was into a wooden barrel and the barrels would have been set aside until needed.  Ah, the aging process.  Distilling was mainly done in the spring and the fall and enough was made to put into storage for a multiple amount of reasons.  So it may have sat for up to a year and a half before being used.

Now, packaging.  What Dr Dodson knew, glass blowing was one of the first industries in Jamestown and started in the year of 1608.  Each bottle of Jamestowne 1608 is hand blown by the glassblowers in Jamestown and the release comes with 2 shot glasses that were the common design of the time period, also hand blown by the Jamestown glass blowers.  The release comes in a hand made wooden box made with exotic woods.  The main wood used is walnut.  Each bottle is also hand dipped in wax to seal the tops and each waxed top has a special seal stamped into the wax.  Once this release sells through that's the end of them.  10 gallons of water only goes so far.

This is the most unique spirit I have ever seen produced anywhere by anyone.  This is not the full complete story, but it's the main gist of it.  The Jamestowne 1608 Single Malt is a distillery only release and can not be bought anywhere else including Virginia ABC stores.  So you will have to visit them at 7218 Merrimac Trail in Williamsburg.  They are open Thursday, Friday and Saturday from 1pm til 7pm.  The Distillery just released these and has already sold 108 bottles as of this writing.  A visit to the Distillery allows you to see and learn the rest of the story not covered here.  Cheers. 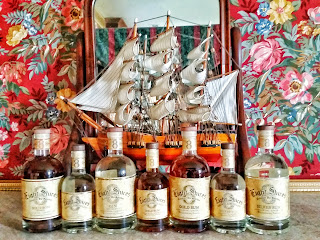 There is presently an investment opportunity available with 8 Shires Distillery in Williamsburg, Virginia.  The investment type is called a debt derivative.  What is a debt derivative?  As defined on Wikipedia;  In finance, a derivative is a contract that derives its value from the performance of an underlying entity. ...Derivatives are one of the three main categories of financial instruments, the other two being stocks (i.e., equities or shares) and debt (i.e., bonds and mortgages).  This opportunity is only available for about one more week.

Today being May 29th, 2018.  A little about 8 Shires Distillery.  From farm to table.  Locally sourced grains come from a local Virginia farm known as Hart and Son located between Gloucester and West Point.  750 acres of farmland and these folks use natural farming techniques producing high quality grains which include indian corn used in both 8 Shires bourbon and gin products creating very unique flavors.

What sets 8 Shires apart from any other Distillery anywhere is the commitment to 17th and 18th century interpretations of spirits produced by this distillery.  Years have been spent researching recipes and techniques in an effort to recreate the flavors of the past.  This caused interest with folks over at the Jamestown Island who do the archaeological excavations and interpretations.  They approached 8 Shires with the idea of recreating the first spirit ever made in what is now the United States.  They offered a very unique proposition that was just to good to pass up.  They found a well that was capped by Captain John Smith which was no longer producing enough water for the settlers.  The Jamestown folks managed to pull 20 gallons of water from the well and save it.  8 Shires has reproduced a single malt spirit using 10 gallons of that water for recreating the spirit of the time.  It's a single malt and it is slated to be bottled in hand blown glass bottles and topped with natural cork wired to the rim of the neck of the bottle.

Release date is expected to coincide with a special event happening at Jamestown Island in April, 2019.  Bottles will be 375 ml each and are expected to sell for about $500.00 each.  Other spirits being produced by 8 Shires are as follows, Silver rum, dark or aged rum, spiced rum, cordials that change with the seasons are about to be released, George Thorpe original which is a bourbon mash bill white whiskey honoring the father of American Bourbon, and the distillery is also working on a single malt similar to the first spirits ever produced in North America.

A trip to the distillery is quite a treat as you can view reproduction stills from the late 16th century all the way up to the late 18th century.  Plans are being finalized now to start outdoor interpretations of colonial distilling using some of the stills on display at the distillery.  While you are there, be sure to try one or several colonial drinks like the wicked maiden that is a favorite by just about everyone who tries it.  Also try a stone fence and be sure to hear the story behind the drink which is a wonderful American Revolution story that is indeed well reputed.  The distillery is located at 7218 Merrimac Trail in Williamsburg.  It is a bit difficult to find as the distillery is located in a building in the back part and the front of the building houses a church.

Check out this link to view more details about this investment opportunity. 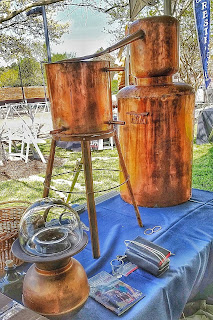