In the event you were not aware that Gloucester County, Virginia has it's own surplus auction site, we found it and are bringing it to you.  A few days ago there was a good amount of items on here, however, those auctions ended and some people got some nice bargains.  Printers, office furniture and supplies.  At the moment, the only items on the site are two county trucks.  You can see above the starting asking price.

http://www.publicsurplus.com/sms/gloucester,va/list/current?orgid=19242  This is the link to the auction site page.  Once there, you can bookmark the page to make it easier to find in the future.  It's not easy to find on your own.

http://dgs.virginia.gov/OfficeofSurplusPropertyManagement/Auctions/StateSurplusAuctions/tabid/855/Default.aspx  Here is the link to Virginia State surplus auctions.

We could not find an auction for Mathews county surplus.

York County has an auction site.

We did a little navigating on the auction site at the top and it's a state wide site so you can search counties and towns throughout the state.  We found laptops and printers, cars and trucks and all sorts of other items on the site. 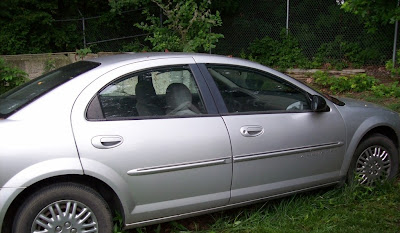 The above car is a 2001 Chrysler with a present price of $305.00  and is at the Gloucester County school board auction.  Dig around, you will be surprised at what you find.  And to think, you did not have to pay for this information.  You get it all here for free.  Gloucester, Virginia Links and News.  More useful by the day.

RICHMOND – Governor Bob McDonnell announced today that for the fourth straight year, the Commonwealth of Virginia has reached the end of the fiscal year with a revenue surplus. Preliminary figures indicate that the state concluded Fiscal Year (FY) 2013 with an approximately $261.9 million surplus from general fund revenue collections, excluding transfers. This is the first time since Governor George Allen’s administration that a governor has attained a revenue surplus at the end of all four fiscal years during his term.

Total revenue collections rose by 5.3 percent in FY 2013, above the revised revenue forecast 3.6 percent growth.  This marks the third straight year that revenue growth has exceeded 5 percent in Virginia. The main drivers of the revenue increase were growth in individual income tax receipts from nonwithholding payments, lower individual income tax refunds and higher than expected recordation tax collections.  A comprehensive breakdown of the preliminary FY 2013 revenue surplus is shown below.

Speaking about today’s announcement, Governor McDonnell commented, “Today’s great news is further proof that Virginia’s economy is getting stronger.  The numbers we are seeing show that Virginia’s housing market is starting to recover, and even more importantly more people are returning to work.  Over the past three years we’ve seen our state unemployment rate fall to 5.3 percent; nearly Virginia’s lowest unemployment rate in over four and a half years.  When I came into office, Virginia faced a stark economic forecast.  We set an important standard of conservative budgeting and conservative spending.  We made tough decisions, cut back where we needed to, consolidated boards and agencies, reduced the number of state employees by over 2,000 and invested in areas that would produce economic growth.  After facing a significant shortfall in fiscal year 2009 in the first year of the Great Recession, we now have seen four consecutive years of improving revenue growth.”

Governor McDonnell continued, “We concluded Fiscal Year 2013 with a preliminary $261.9 million revenue surplus and a 5.3 percent increase in revenue collections.  Most of these surplus funds are already allocated by budgetary requirements, including payments to the Revenue Stabilization (“Rainy Day”) Fund and the Water Quality Improvement Fund.   Nonetheless, the preliminary report I received from the State Comptroller, indicating that actual general fund revenues collected exceed our budget estimates, will allow me to authorize the pay increase and salary compression adjustment in the Appropriation Act, giving state employees a pay raise for the first time in six years.  This increase, which will be reflected in the August 16, 2013 paycheck for state employees, will mark the third time in my four years that we have been able to provide additional compensatory benefits to our state employees through incentive programs that encourage increased savings among our state agencies by providing a three percent performance bonus in 2010 and 2012, and now the first permanent base pay raise.  I want to thank GACRE, JABE and the Department of Taxation for their important work on consensus forecasting.  Today’s great news is truly a product of the bipartisan effort of the General Assembly to rein in spending, budget frugally, and enact our job creation and incentive programs to encourage economic growth in Virginia.  This fourth straight revenue surplus is a testament to the importance of fiscal constraint and conservative revenue forecasting.  Virginia is in a better economic position today than it has been in many years because of the smart budget decisions made over the last 3 ½ years coupled with our bipartisan focus on increasing job creation and economic development across the Commonwealth.”

Secretary of Finance Ric Brown added, “Virginia’s economy is improving.  After facing years of little or negative growth, we continue to head in a positive direction as a result of our fiscal discipline and conservative budgetary approach.  This is a Virginia accomplishment as much as it is a finance one.  It is indeed good news for our collective Commonwealth.”

Senator Walter Stosch (R-Henrico), Chairman of the Senate Finance Committee, remarked, “I am very pleased that the Governor, following the advice of his economic advisors, adopted a conservative estimate of the expected revenues for the most recent fiscal year.  This is smart financial planning as good stewards of Virginia's taxpayers.  With the actual revenues exceeding the conservative estimate by $261.9 million, an important result will be to have the funds necessary to deposit the required amounts into the Revenue Stabilization Fund and the Water Quality Improvement Fund, and pay other bills as required by law.  While unobligated amounts will indeed be minimal, Virginia continues to lead the way among other states in fiscal management through budgets that always balance, and by paying our bills on time.

Delegate Lacey Putney (I-Bedford), Chairman of the House Appropriations Committee, noted, “I applaud Governor McDonnell and my colleagues in the General Assembly for our work in properly estimating revenue growth over the last four years and budgeting in a conservative manner.  Because of our good fiscal management, Virginia is a sound financial position and seeing encouraging economic growth.  This surplus is a solid accomplishment during these uncertain economic times.”

The final FY 2013 surplus tally will not be available until August 19th, after final tabulations of transfers and appropriation savings recognized through greater operational efficiencies and incentives to control spending throughout state government are calculated.  Each of the past three years have also generated a savings surplus, creating a total surplus of nearly $1.4 billion over the past three years.  We anticipate another savings surplus this year.  Most, if not all of the revenue surplus, will be used to satisfy Constitutional or other legal requirements, such as additional payments to the State’s “Rainy Day Fund” and the Water Quality Improvement Fund.

Analysis of Fiscal Year 2013 Revenues
Based on Preliminary Data