Constitutional Corner - And the Myths Go On 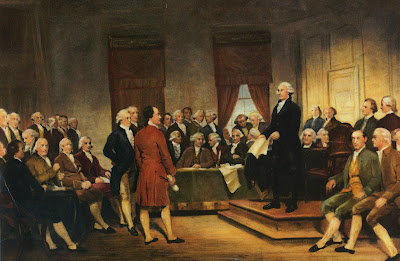 
I have to hand it to Fairfax Free Citizen, their intrepid insistence that both sides of the Article V Convention issue be given an fair hearing is highly commendable.   Where else, I ask, do you find a site willing to put up with the flood of comments that a Convention of the States article, pro or con, invariably generates?
I was pondering what to write about this week when Judi Caler made it an easy decision: Convention of the States (COS).  Ms. Caler published a rather inept reply to an article posted by Rita Dunaway of the COS Project on the Blaze website.  Caler claims that Dunaway challenges five “myths” which are actually true, “while invoking at least 9 myths of her own.”  Call it “The Dueling Myths” exchange if you will.
I will deal with Caler’s claims in a moment.  First, I want to get two issues out of the way: this name thing, and the “runaway convention” claim.
I realize that even using that term (COS) make some conservatives apoplectic.  So be it.  What’s in a name?   I don’t care what you call it; Constitutional Convention (I don’t believe it fits Black’s definition of same since it has no power to “frame, revise or amend” the Constitution, only propose amendments, but I’m not hung up on the name), Convention of the States (that’s certainly one way of looking at the event), Article V Convention (aka “A5C,” the best label if you ask me, but then you didn’t).
The term “Convention of the States” was birthed (as far as I know) in a letter sent on February 21, 1783 by Major General Henry Knox to his old friend … (continue reading on constitutionleadership.org)