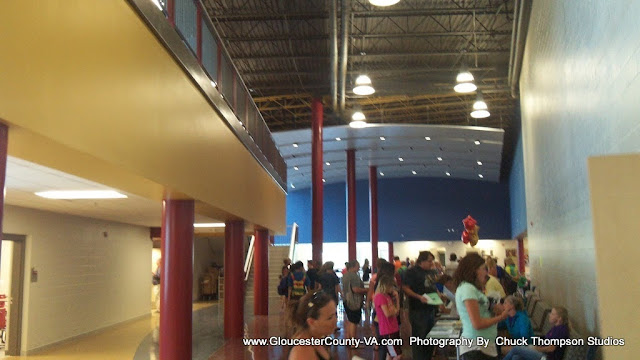 There are a number of people on the Gloucester County School Board whom are upset with the safety concerns we have raised and seem to think that the new school does not have any of the safety issues we have raised.  In a few areas they are correct.  For one, we were not made aware of the safety bars on the gates in the back.  When we walked through the area, gates that were closed were locked.  One was open that we went through.  We did not give it a thorough inspection to see how they actually worked. 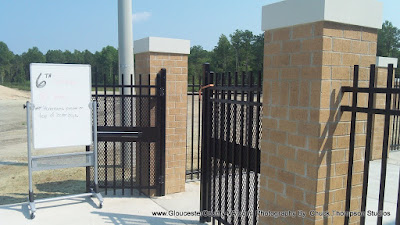 Most people seem to think that not one student would ever think of trying to climb the fences in the back of the building.  Well we hope not.  They are designed to make it extremely difficult to consider climbing.  Trees are also not where one wants their children, preteens, teenagers, offspring, to be but many parents have found them in the trees anyway.

The good news for everyone is that these gates do open from the inside using a push bar.  So they will not get trapped in the courtyards if there is ever a fire.

To address the issue of how does the school get the handicapped students out of the building especially if they are on the second floor?  Troy Anderson made sure I received the below picture. 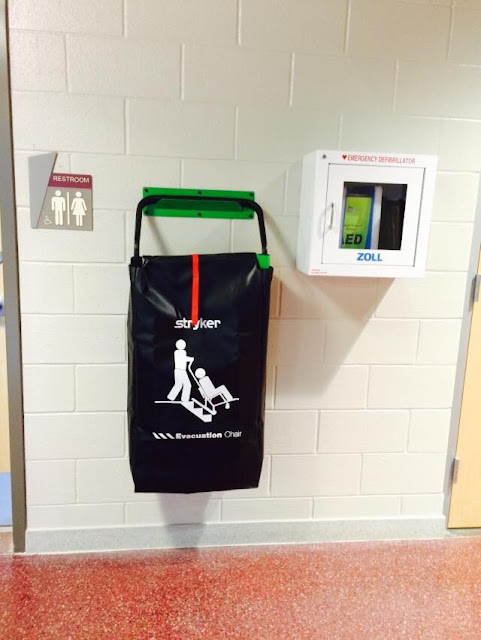 Troy explained that there are 4 of these stationed at each stairwell and at the media center.  I asked how many handicapped students the school has but did not receive an answer.  I wanted to know if 4 was enough.  Also, I want to know exactly how these are used.  No answer.  I have more questions regarding these.
If there are more than 4 handicapped students at the school and should a real emergency ever occur, then who makes the decision who goes first?  What are the plans if these have to be used?  Will the students go down one side of the staircase while this is being used on the other side of the staircase?  From the picture shown on the Stryker, how will the person handling it maintain their own balance?

We plan on getting the answers to these questions and we will publish that information as soon as we get it.

What still bothers us is the rails on the second floor and that stupid open floor plan.  I will say that aesthetically it looks nice but there are reasons schools were not built like this in the past.  It's not that it was "not" thought about it was considered dangerous for many reasons.  Our initial post we thought the rails were about 36 inches.  After looking at a picture taken but not posted we recalculated and estimated about 40 inches.  Charles Records informed us that they are 42 inches.  So that is 3 and a half feet tall.  I don't care if they are 6 feet tall.  In a Middle School my opinion is that they are very dangerous.  If you can throw a heavy bookbag over the top then whomever might be below can be very seriously hurt or worse.

But there are some people who honestly think this would never happen.  I don't think accidents will ever happen but life likes to prove me wrong all the time.  Folks on the school board think that this is just some reason to complain for fun.  One of the students in this school is one of my own children.  My concern is the safety of not only my own, but everyone.  This school is a monument to stupidity. 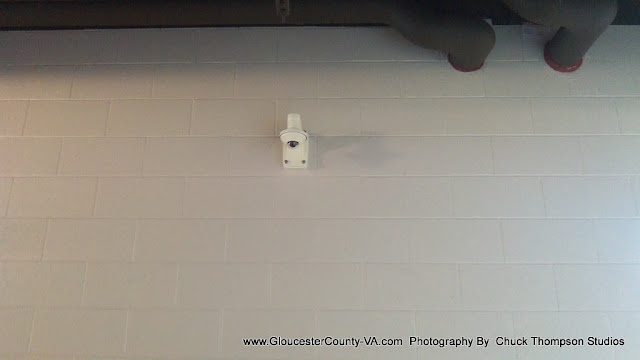 Sold to you as, "for the safety of the students and teachers", these cameras have been mounted all over the place to make sure we have a record of anything that may occur.  If they are not doing anything wrong, then they have nothing to worry about.  On the other side of this coin, I want internet access to these cameras 24/7.  These cameras need to be in all the classrooms, teachers lounges, the Principle and Vice Principles offices, the cafeteria, break rooms, the kitchen, the gym and the workout room, and all back work rooms and storage.  They should also have full audio.

In the event that certain teachers or the Principle and or Vice Principle have private meetings with parents then there should be a privacy mute option at that point for the audio only.  Again all cameras should be internet accessible for the entire Gloucester County public.  Now if they want to argue the privacy concerns, all I have to say is that if they are not doing anything wrong then there should not be any issues.  Also, if the School Board wants to argue the costs well all I have to say is they did not argue the costs for when they put these in.  Also were any of the public asked about whether or not we wanted these?  No?

This is 1984 Orwellian despotism and not Constitutional Government.  No one needs to be spied on under the guise of safety.  But of course unless you are seeking to control the students in a quasi militant manner removing their self respect and dignity then this is the way to go about it.  Quash their individuality and turn them into machines that simply obey.  Then you have machines ready to work in the new progressive workforce where questions are never asked and assignments are happily accepted and acted upon.  One can learn to be happy in their new slavery. 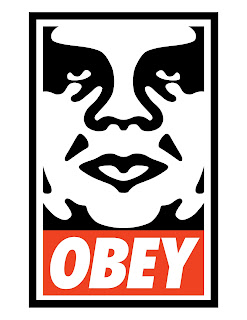 The folks at the School Board want to sell you on their concept that the new Page Middle School is something to be proud of.  In my own opinion it is appalling on so many levels.  Aesthetically pleasing to the eye, yes, in some cases but that does not make it safe or sound.  These are my questions, opinions and or concerns and not everyone is going to share and or agree with them and that is fine.  That is part of what makes life more interesting.