The Waterline At Page Middle School: Disaster Waiting To Happen Here Too? 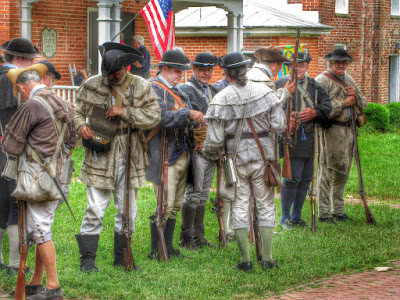 The new 16” waterline extending along T.C. Walker Road and installed as part of constructing Page Middle School, does not seem to have been installed in the proper location. Apparently when VDOT required changes to design drawings for improvements of the T.C. Walker Road and Route 17 intersection, those changes were not incorporated into the civil site and utility drawings. This failure has resulted in the 16” waterline now being located in the very bottom of the VDOT drainage ditch.
As the story goes; the contractor installed the waterline and then began constructing the drainage ditch. As they constructed the ditch they discovered they removed most of the dirt above the waterline. Instead of removing the waterline and reinstalling it in the correct location when the error was discovered, they excavated along side of and under the waterline, removing the stone bedding and dirt from under the pipe while it was still put together.

Once the stone and dirt are removed from under the waterline it will sag downward. The more it is forced to sag, the more each connection joint in the line separates. This is a dangerous and unacceptable method of lowering a waterline that operates under pressure. The reliability of the gaskets used to seal each joint and the chances of every joint being completely home (fitted all the way together) become compromised when manipulated in such a manner.

The required stone bedding under the pipe is also compromised and often completely ignored when utilizing such method. Another reason to avoid such method of adjusting waterline depth is it rarely results in achieving the required depth. A significant section of the new waterline does not come close to having the required amount of cover. On August 20, 2015 I used a four foot long probe rod to determine the amount of cover over the waterline and discovered areas with less than two feet of cover. The minimum cover requirement is generally three feet. The main reasons for minimum cover requirements are to protect the waterline from freezing and to limit pipe movement, thus preventing the pipe from blowing apart under pressure. The close proximity of the waterline to the water tower that supplies it, the fact that the pipe dead ends so close to the incorrectly covered pipe and that flow through the pipe will basically cease daily during each day’s coldest periods, during weekends and during other times the school is closed during winter months, are all very good reasons for not accepting the waterline in it’s current condition. The waterline in its current condition will also increase the chance of VDOT damaging it during ditch maintenance.

If VDOT should damage the line, they will be exempt from responsibility as prescribed by the Code of Virginia and all liability will fall on Gloucester taxpayers. If, for any reason, the waterline blows apart so close to the water tower supplying it, the results would be catastrophic; most likely resulting in a significant portion of T.C. Walker Road and the entrance to Page being washed away before the water could be turned off. Page would be closed until water could be restored and the road and entrance repaired. In this scenario Gloucester taxpayers will also assume liability.
I know everyone wants the new school opened as currently scheduled, but this serious issue should not be ignored or dismissed for the sake of opening on time. It should also not be dismissed to save a buck, no matter whose buck it is.
Respectfully and just my 2 cents worth,
Kenneth E. Hogge, Sr.
Gloucester Point 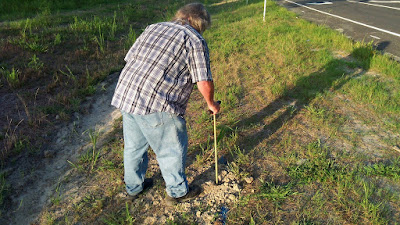 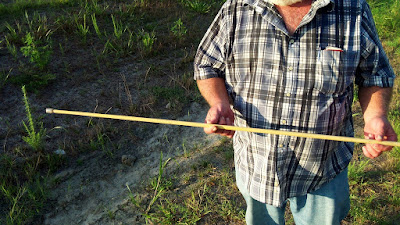 The two above pictures shows where we were out measuring where and how deep the waterline is buried by Page Middle School.


Schools and the Contractor are very well aware of the waterline issue and have committed to making the needed repairs during the Winter Break in December. Not only has the Contractor’s President issued a guarantee to the County for the repair, but we also continue to hold a performance bond on the Contractor to ensure the repairs are made to satisfaction. Public Utilities is aware of the Contractors commitment and finds the repair strategy to be acceptable.

Thank you for your support. Have a nice day.