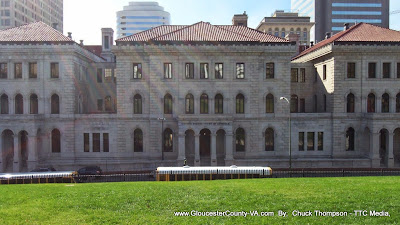 So why not just take the new codes coming out of Richmond and put them before the regular courts?  This is an answer where you will probably have to do some research if you have never been in the courts before.  You simply can not trust the so called regular courts of corruption.  Let's take a moment to look at this.  If we even have anyone suggesting any code that looks like it could breach the Constitution and the unalienable rights of the people, the courts have a duty and are honor bound to do something about that even before it goes to the floor of our Commonwealth legislative body.  Has anyone seen or heard of this being done anywhere?  Me either.  A corrupt government depends on corrupt courts in order to put forth their illegal codes.  A corrupt court depends on a corrupt government to continue to support the so that they may continue to do as they please.  The two go hand and hand.  One can not exist without the other.

The enemies of Liberty that have infiltrated our government would have you to believe that Common (Natural) Law is passé and have been legislated away. We the People ordained the constitution that created and governs our government, how then can the "created" supersede the "creator" and by what authority? They have none!

The People’s US Constitution Article VI, Clause 2, known as the “Supremacy Clause” denies the ability of the servant to act as master: “This Constitution, and the laws of the United States which shall be made in pursuance thereof; and all treaties made, or which shall be made, under the authority of the United States, shall be the supreme law of the land; and the judges in every state shall be bound thereby, anything in the Constitution or laws of any State to the contrary notwithstanding”.

If you take a corrupt government before a corrupt court, how can you expect to win?  And attorney's can not be involved in this either as they are part of the corrupt system.  They say you must have a license to practice law in the courts.  Folks there is not one attorney that I have ever met that has a license to practice law in any court anywhere in these United States of America.  Instead they say, or granted a right, as in BAR attorney's whom are first and foremost loyal to the judge of the court no matter what.  Read their own statements and pledges.  It's all right there.  And the BAR is a foreign concern which means all lawyers who are members of the BAR are required to file a foreign agent statement with the United States of America.  Whether or not they do is still another issue, but they are in fact required and if they have not, are in violation of the Foreign Registration act.

Attorney's will be fighting this at every angle as it creates a real court and throws them out.  They can not control it nor make money from it.  It's never been about justice folks.  It's been about enslaving us and taking our money.  Think about it.  How many attorney's are you seeing fighting these thugs in Richmond?  They are silent.  Why?  They stand to make huge sums of money if all these codes go through.  And they will hardly have to even work for it and they are going to charge you large sums of money while barely doing anything except deceiving you and cutting deals to make it look like they did something for you.

I am not saying all attorneys are bad.  There are a few good ones.  Very few.  They usually do not last long or keep themselves pretty well hidden because they realize and dislike all the corruption within their own business.  And that is all the entire law practice is, a business that they have usurped for their own.  And they do not even have a business license.  What a crock that is.

Do your research.  Start here.  https://www.nationallibertyalliance.org/common-law

Become part of the solution.  Join the militia, or start a militia in your locality.  If you are part of a militia, register everyone in your group to be Constitutionally compliant.  There are no fees and you come under Federal and State recognition.  You do not surrender your militia to anyone else by registering.  https://www.nationallibertyalliance.org/militia  go to the link provided here.
at 3:00 PM