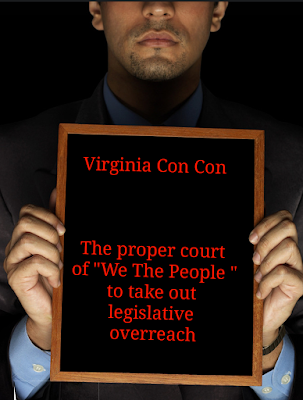 A few days ago I introduced the idea of an In State Constitutional Convention.  This is part two in an effort to explain more about the idea and why we need to do this.  An In State Constitutional Convention can not touch the underlying Constitution nor can there be any form of effort to change or rewrite the underlying Commonwealth of Virginia's Constitution.  That is not what the In State Constitutional Convention is for.  The Convention is actually a court.  The proposal is that a member of every board in every locality throughout Virginia send one delegate for that locality to the Convention.  The Delegates will hear each House Bill from Richmond and decide if it has violated the purpose and intent of either our Commonwealth Constitution or that of our Federal Constitution.  If yes, the delegates will vote to kill the new bill.  If not, the House Bill gets a pass.  If the delegates can not make a determination, the delegates have an opportunity to bring back to their respective localities and put the matter before the people to determine if they want to allow or kill the House Bill.  In order to kill a House Bill. two thirds of the localities must agree that it violates an area of either the Commonwealth's or Federal Constitution.

The only option for any form of change to our present Constitution that may be considered is an amendment for these Constitutional Conventions to continue in an effort to reign in a rogue government.

This type of court is known as a Common Law Court which is the type of court our Constitution guarantees to "We The People".  The below code is from the Code of Virginia.

The common law of England, insofar as it is not repugnant to the principles of the Bill of Rights and Constitution of this Commonwealth, shall continue in full force within the same, and be the rule of decision, except as altered by the General Assembly. (This last part, highlighted, is an usurption of our rights, and not lawful).
Code 1919, § 2, § 1-10; 2005, c. 839.
https://law.lis.virginia.gov/vacode/title1/chapter2.1/section1-200/

If any person, with the intent to coerce, intimidate, or harass any person, shall use a computer or computer network to communicate obscene, vulgar, profane, lewd, lascivious, or indecent language, or make any suggestion or proposal of an obscene nature, or threaten any illegal or immoral act, he shall be is guilty of a Class 1 misdemeanor. A violation of this section may be prosecuted in the jurisdiction in which the communication was made or received or in the City of Richmond if the person subjected to the act is one of the following officials or employees of the Commonwealth: the Governor, Governor-elect, Lieutenant Governor, Lieutenant Governor-elect, Attorney General, or Attorney General-elect, a member or employee of the General Assembly, a justice of the Supreme Court of Virginia, or a judge of the Court of Appeals of Virginia.
Now what is interesting about the above is the fact that it's actually from English Common law and was once the law here in the Colonies.  Tavern keepers were not allowed to have any of their patrons speak anything negative about the government or government officials.  Once we became the United States, this was forever changed as it is considered repugnant to our Constitution, specifically free speech.  Politicians did in fact try to bring back the above style of law early in the Republic of these United States of America but the idea was shot down as a violation to the 1st Amendment.  So, if 18.2-152.7:1 should be passed, then those who vote yes, those who proposed and sponsored the bill and the Governor, should he sign such into law, will all be charged with violations to the Constitution  and arrested and brought before the Convention for trial under the Convention.
So why not use our present courts?  Because our present courts are not Common Law Courts.  They are civil law courts that are in violation of the Constitution.  Something you will have to do research on your own.  The evidence for this can be found on the National Liberty Alliance website.  Visit https://www.nationallibertyalliance.org/  Plus, by doing this through a Constitutional Convention, we can act much faster.  Does the Convention have to have members of the local Boards?  No, it can be the Sheriff's from each locality.  It can be the Chair of each board and the Sheriff.  In fact, by having our Sheriff's involved, whom are all Constitutional Officers, it gives more force behind the actions of the Convention itself.  It's still a work in progress and I believe it's a sound solution.
More to come on this. 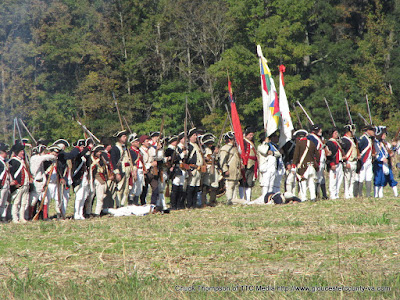