The video above is provided by the Gloucester County Board of Supervisors and the clip is used under the fair use act of the US.  In Gloucester's own Board of Supervisor's meeting, you will see Anne Ducey-Ortiz admitting that the Gloucester Main Street Preservation Trust provided food during meetings with Gloucester County Officials.  One of these officials is a member of the Board of Supervisors.  Seems innocent until you start to look at the rules and regulations that government officials must abide by to avoid even the appearance of  a potential bribe.  We went to one of our inside government contacts to get more information on this.  What we were told is that in the Federal Government, a gift of up to $20.00, one time, is acceptable, but even something as simple as on going taking of a free cup of coffee is considered to be a bribe by the Federal Government.

In other words, a one time meeting between Gloucester Main Street Preservation Trust and Gloucester County Government Officials could have food as long as the amount was kept below or at the top level of $20.00 per person.  More than one time on accepting food during a private concern meeting under federal regulations and the officials would now be under investigation for accepting bribes if they were federal employees.  We do not know what state law says on this at this time but we are going to look into it.

We are not saying that bribes have taken place, but we are saying that it looks like bribes may have actually taken place and requires further investigation.  Another question that needs to be asked is why is a private concern such as the Gloucester Main Street Preservation Trust so tied up with Gloucester County Government and why is Gloucester County Government so tied up with a private concern?

Which we still have another question.  What is a Gloucester County Official, employed by the county, doing on the board of a private concern as the Gloucester Main Street Association?  This is a very clear conflict of interest. Note the name on meet the board above from the Gloucester Main Street Association, Hilton Snowdon. Now note the same name from the Gloucester County Government Site, Hilton Snowdon as the Tourism Director.  Clear conflict of interest.  But then again, these are the same people that have consistently shown violations to the public trust by allowing numerous other conflicts of interest to continue to exist throughout the county such as Animal Control Officer Jeff Stilman's Pet Cremation business, Carl Shipley's Carpet cleaning business and another Animal Control Officer's Buy It Used Store that looks like a county used furniture outlet store.


NOW FOR BREAKING NEWS!  While we were putting this altogether, we just found a major conflict of interest.  Louise Theberge is on the board of the Gloucester Main Street Preservation Trust.  This screen capture proves it. 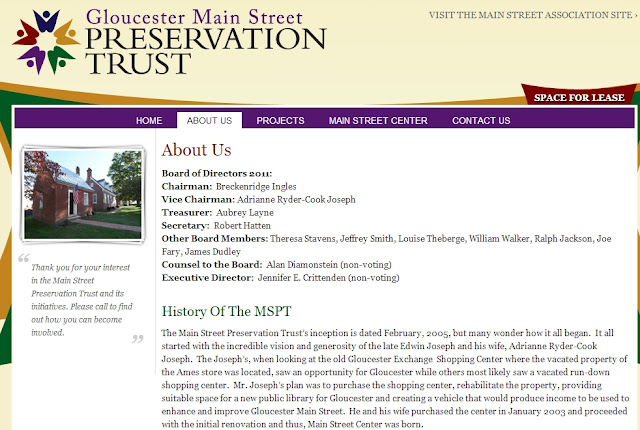 Under other board members, Louise Theberge, Chair of the Gloucester County Board of Supervisors is listed as a member of the Gloucester Main Street Preservation Trust.  A serious conflict of interest.  No wonder the county lets others get away with all these other violations.

Now for the final question of why the Gloucester Main Street Village has been expanded beyond the original 2010 Frazier plan that was only covering the Gloucester Main Street area businesses.  The answer as to why it was expanded is very simple.  The statistics under the Frazier plan most likely did not support business investment into the Gloucester Main Street Village as it then stood.  It could not support it now.  In order to inflate the statistics to show that the concept could be sold, the big box retailers had to be incorporated to get the proper numbers.  Without those numbers a reasonable business person would not look the other way, they would run the other way as fast as they could all the while laughing at such an absurd presentation.

One can easily see by spending a day counting foot traffic in the Gloucester Main Street Business District, that there are not enough people to support a new business unless that business was very unique and special and could attract business no matter where it went.

This is your tax dollars being used against you in the most foul violations to the public trust we have seen to date.