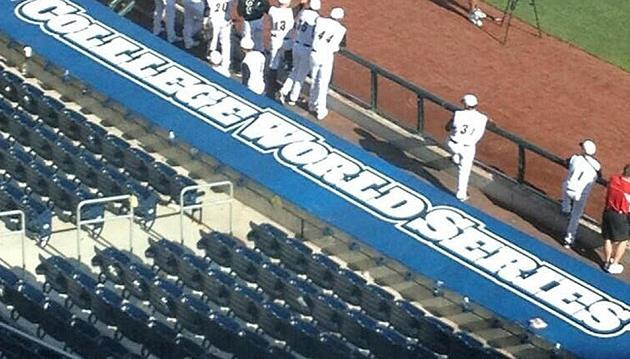 Misspellings, typos and grammatical errors come with the territory when you seek out a career in writing. Fortunately for most of us, there's someone looking over our shoulder — sometimes both shoulders — to make sure those errors get corrected in a timely manner, or at least before they reach the scale of the conspicuous misspelling seen during opening round play at the College World Seriesin Omaha.

As first spotted and tweeted to his followers by Howie Lindsey of the Louisville SportsReport, aRivals.com site, the people in charge of laying out the College World Series banner on one of the dugouts missed a very large and completely unnecessary third L in the word college.
Yeah, last we checked two Ls are plenty and three's a crowd.
How such an error goes unnoticed as stadium workers prepared TD Ameritrade Park Omaha for the big event is beyond me. I mean, it's right there, in capital form, looking very awkward next to the two original Ls. But I guess you could look at it as another reminder that perfection is something we'll always strive for, but never attain. It just... happens.
Either way, for one day at least the third L is welcome and we'll formally call it the 'Colllege' World Series in Omaha. If that's what we're still calling it on Sunday, then someone will have some serious explaining to do.
Oh, and by the way, for those who may not understand the 'Great googly moogly' reference inLindsey's tweet (and even for those who do), here's the origin:

http://sports.yahoo.com/blogs/mlb-big-league-stew/colllege-world-series-opens-conspicuous-misspelling-dugout-034229189.html  Link to the original story over on Yahoo.