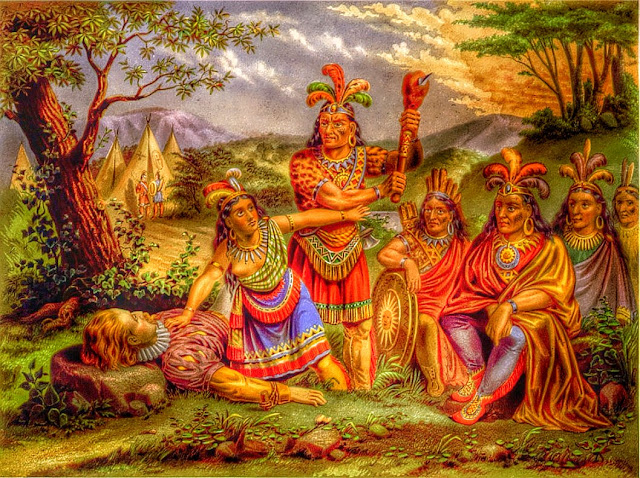 Pocahontas, Capt. John Smith and Chief Powhatan get their due Friday in a dedication ceremony that preserves the village site that made them famous.
Virginia Gov. Robert McDonnell and Native American tribal officials will dedicate the Werowocomoco (WER-ruh-wo-KOM-uh-ko) site near Gloucester, Va., in a day-long event. Now an archaeological site, the village appears to have held a longhouse, judging from postholes, where Smith famously encountered Powhatan after the founding of Jamestown in 1607.

"One of the most significant archaeological sites in North America, it is where settlers and Native Americans first encountered each other," says archaeologist Martin Gallivan of the College of William and Mary in Williamsburg, Va.
A renowned part of colonial-era folklore (and a Disney movie), the rescue of Capt. John Smith by Pocahontas would have occurred at the site, if it really happened, which historians largely doubt. First recounted in a 1624 book, the story goes that after capturing Smith and bringing him to their chief's longhouse, Powhatan's tribesmen were ready to "beate out his braines," when Pocahontas took his head in her own arms to stop his execution. Smith didn't write about the rescue in his earliest accounts of the colony, but he did provide a description of the location of Chief Powhatan's village and longhouse in later accounts that match Werowocomoco. Already on the National Register of Historic Places, the village was the capital of Powhatan's kingship over Virginia's Tidewater region and will be precluded from residential or business development.

"It's a tip of the hat to the first 15,000 years of the American story," says Charles Mann, author of 1493: Uncovering the New World Columbus Created. "Powhatan and the empire he put together were major players in 16th- and 17th-century East Coast history - important in their own right and not just because they were unlucky enough to be descended upon by the English."
In Smith's accounts of his capture by Powhatan's tribe, he describes a chief's longhouse that in its floor layout matches the 72-foot-long-by-20-foot-wide floor plan seen at the site. A longhouse was typically built with trees bent over in a semicircle with woven mats fixed across the top and sides. Some historians say Smith mistook a tribal induction ceremony as a near-brush with beheading in his account of his capture in 1607.

Gallivan and his team have uncovered more than a dozen copper scraps at the longhouse site, ones that chemically match European trade items used by Jamestown's colonists and also found at that site, which was about 16 miles away from Werowocomoco. Werowocomoco was located on a shallow bay on the York River, while Jamestown was on swampy ground on the James River. "Only chiefs controlled copper at the time. Its red color was ritually significant in their mythology," says Gallivan, who will speak at the dedication ceremony.
In 2001, landowners Lynn and George Ripley had collected artifacts on their farm, which led to excavation of the site. "They have been very generous and put up with us ripping up their front yard for 10 years," Gallivan says. The archaeological work was conducted with the input of six Native American tribes related to the Algonquin group descended from Powhatan's tribe.

After 1609, which was a very hard year - "the Starving Time" for Jamestown - fewer and fewer Native Americans appear to have lived at Werowocomoco. Powhatan relocated to villages farther west, for example. The ultimate goal would be to see the site become a national park, Gallivan says. "Jamestown and Williamsburg only tell one part of the story from the colonial era, we could tell another side at Werowocomoco."