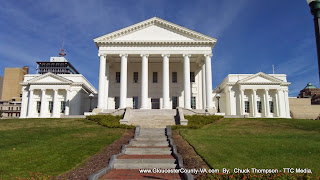 (By:  Chuck Thompson)
Governor Ralph Northam has declared a state of emergency for this coming Monday where he says guns to be outlawed from the grounds around the Capitol building due to supposed threats seen on Facebook.  Here is a serious problem folks, he wants to ban guns from the grounds of the Capitol building yet he does not have that right.  In fact, he is breaking the law of the Commonwealth even trying to declare such.  HB 20 sponsored by Delegates Mike Watson and Tony Wilt, stating the following; "Emergency services and disasters; constitutional rights, Provides that nothing in the Emergency Services and Disaster Law shall be interpreted to limit or prohibit the otherwise lawful possession, carrying, transportation, sale, or transfer of firearms".  that law passed in 2012 under governor McDonnell who signed it into law.

So we have a real dilemma here folks.  Either the present Governor is ignorant of the law, or he just does not care what the law says.  Now let's address his argument for trying to pull this illegal bluff off.  He states that there is intel that "Militia plan on storming the Capitol on Monday the 20th, VCDL's lobby day.  That folks is a lie.  No militia is planning that anywhere.  Paramilitary or more like Anarchists have in fact stated that they do have these plans.  I knew about them weeks ago.  But to claim "Militia are planning this is a purposely deceitful propaganda ploy as there are a number of Constitutionally planned militia in the making which scares the hell out of the democrats, because the militia will not follow any orders that are unconstitutional such as red flag laws, and the like.  The left are trying to create a bad impression of the coming Militia because it stops their plans to disarm law abiding citizens against the constitution of both Virginia and of these United States of America.  It's what we call using the poison pen to undermine sound ideas.

Now what further should concern everyone is the idea that the actions are construed as so grievous by so many as to why anyone would even consider violence against the Commonwealth legislators.  Could it possibly be due to the fact that the democrats are violating their oaths of office?  Democrats breaking the supreme law of the land both with the Virginia Constitution as well as the Constitution of these United States of America?  Attempting to tear down and destroy each and every aspect of the Bill of Rights?  The Bill of Rights which are not rights granted "We The People", by government, but instead by God and only an extra layer of protection for "We The People" in the event of a tyrannical government?

It's beyond disturbing that anyone could think that destroying the Bill of Rights will protect anyone except a corrupt government.  We are seeing democratic legislators spitting in the face of every Virginian and lying all along the way while doing so trying to convince the ignorant that they want to take away your rights to keep you safe.

It was laughable when one person stood before the democratic lead committee the other day and was given unlimited time to tell the committee that he was from Fairfax county and that 80% of the people in Virginia, later corrected to 80% of the people in Fairfax county supported gun control.  Can someone show me where even 80% of the population in Fairfax speaks English?  Can anyone even show me where 20% of Fairfax even speaks English?  It was highly dishonest and the Democrats went along with it because it supported their cause.  Never mind that most of the people that spoke that morning were dead set against the stripping "We The People" of our rights.

A serious problem we now face here in the Commonwealth is how do you trust a government that lies, and breaks the laws in order to put forth their own agenda?  Where is law?  Democrats are actually creating a precedence for lawless government.
at 7:38 PM