We’re now only weeks away from the next big GMO-labeling vote in the United States; this time in Washington State, where citizens will cast their votes for the people's initiative 522, "The People's Right to Know Genetically Engineered Food Act," on November 5.
Initiative 522 will require seeds, raw agricultural commodities, and processed foods to be labeled if they’re produced using genetic engineering.1
As in last year’s California Proposition 37 GMO labeling campaign, the opposition from industry is fierce, with millions of dollars being poured into the anti-labeling campaign.
According to the Public Disclosure Commission,2 the “NO on 522” campaign has already raised more than $11 million—nearly four times the amount raised by the pro-labeling camp. Monsanto leads the charge, having donated close to $4.8 million to the anti-labeling campaign.
I want to remind you that the success of this ballot initiative is dependent on public donations, and we’re up against industry giants with very deep pockets, so please, help us win this key GMO labeling battle and continue to build momentum for GMO labeling in other states by making a donation to the Organic Consumers Association (OCA) today.

The Two Faces of Monsanto

According to Robb Fraley, executive vice president and chief technology officer of Monsanto, the company backs efforts to prevent GMO labeling in Washington State “for the same reasons we opposed the California initiative.” He recently told Politico:3

“The reason people are funding campaigns for mandatory labeling is because they basically want to get rid of biotech, and they want biotech to suffer the same view as salt or sugar on the label, and the science doesn’t support it.”

Curiously enough, Monsanto is more than willing to “support” GMO labeling once they run out of options. Here’s a Monsanto ad from the UK, letting British consumers know how much the company supports the mandatory labeling of their goods—even urging Britons to seek such labels out—ostensibly because Monsanto believes “you should be aware of all the facts before making a decision.”
What’s the difference between British shoppers and American shoppers? Why does Monsanto support one nation’s right to know but not another? It’s time to put an end to this hypocritical charade and label foods in the US, as has been done in 64 other countries4 across the globe already! 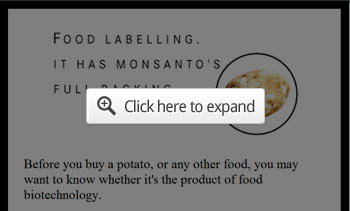 In addition to Monsanto’s $4.8 million donation to the No on 522 campaign, Dupont has kicked in $3.4 million,5 and The Grocery Manufacturers Association (GMA) $2.2 million. UPDATE: The Grocery Manufacturers Association has just kicked in another $5 million! The Grocery Manufacturers Association has now contributed over $7 million against I-522! Curiously absent from any list of donors are the big spenders from last year’s No on Prop 37 campaign. The reason for this is not likely to be due to a change of heart on these companies’ behalf. Rather we may be looking at yet another level of shifty maneuvering.
Aren’t these companies willing to tell you the truth about anything?Food democracy Now! recently notified subscribers that the Washington State group Moms for Labeling has sued6 the Grocery Manufacturers Association (GMA), claiming the trade association is “laundering money" from their members to “illegally” hide the donors identities.7
GMA members include popular food and beverage giants like Pepsi, Coke, Kraft, Kellogg's and General Mills. Last year, many of them faced boycotts and bad publicity once people realized the brands had spent large sums of money to keep them in the dark about genetically engineered ingredients. So this year, many of the same companies are simply trying to circumvent having to reveal their position on this issue.
Last year’s labeling campaign also made many Americans aware of the fact that some of their beloved and trusted natural/organic brands are actually owned by the very same junk food corporations that fought against GMO labeling in California. This too caused outrage, and for good reason. Essentially, you have brands that proclaim to be all natural and/or organic taking a stand against your right to know what’s in your food. It doesn’t get any more hypocritical than that. As reported by the featured article:8

“[S]tate election rules requires political committees to reveal their own donors so that voters can tell who's behind political contributions from generic-sounding groups, such as the GMA, that are helping fund initiatives.

However, in its complaint,9 the pro-522 activists contend, through whistleblower sources, that the GMA specifically appealed to members to contribute to the No campaign. The complaint states: "The Grocery Manufacturers Association has made a special appeal to its members in the form of a voluntary special assessment, to fund the No on 522 Campaign." According to state rules, if that's true, that would make the GMA a political committee.”

Recent polls show that 64-66 percent of likely voters in Washington State strongly support GMO labeling, which puts further pressure on companies who’d rather not disclose such ingredients. The following graphic reveals which brands support labeling, and which ones hide behind the trade lobby group, GMA, which is funding the NO on 522 campaign in its own name rather than the companies’ whose donations are being used. Essentially, that means any company maintaining membership with the GMA becomes suspect in this regard.

You CAN Make a Difference

More than 25,000 people petitioned Dr. Andrew Weil to withdraw his company, Weil Lifestyle, from the GMA for this reason. He listened, and withdrew his membership. The Organic Consumers Association is currently petitioning Aurora Organic to take a clear stand and withdraw its membership from the Grocery Manufacturers Association10 as well. 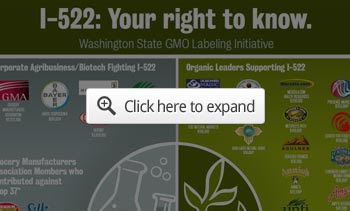 “Because glyphosate moves into the soil from the plant, it seems to affect the rhizosphere, the ecology around the root zone, which in turn can affect plant health,” said Robert Kremer, a scientist at the United States Agriculture Department, who has studied the impact of glyphosate on soybeans for more than a decade and has warned of the herbicide’s impact on soil health.

Like the human microbiome, the plants’ roots systems rely on a complex system of bacteria, fungi and minerals in the soil. The combination, in the right balance, helps protect the crops from diseases and improves photosynthesis.

In some studies, scientists have found that a big selling point for the pesticide — that it binds tightly to minerals in the soil, like calcium, boron and manganese, thus preventing runoff — also means it competes with plants for those nutrients. Other research indicates that glyphosate can alter the mix of bacteria and fungi that interact with plant root systems, making them more susceptible to parasites and pathogens.”

Incredibly, the article actually hints at the possibility of engineering soil microbes to “make up” for the detrimental effects of Roundup! Earlier this year, Monsanto purchased “select assets” of Agradis,12 a “sustainable agricultural solutions” company founded by J. Craig Venter, a scientist who sequenced the human genome to develop various microbes and “agricultural biologicals.” Monsanto also acquired a collection of Venter’s microbes. According to Monsanto’s chief technology officer Robert Fraley, “the foray into microbes... is to improve yield and address some of the issues raised about glyphosate.” What the future might hold if they actually go so far as to tinker with genetically engineered soil microbes is anyone’s guess. But I’m betting it won’t be good...

Join Us in Your Right to Know by Getting GMOs Labeled!

While California Prop. 37 failed to pass last November by a very narrow margin, the fight for GMO labeling is far from over. In the past few weeks, Connecticut and Maine have passed GMO-labeling bills, and 20 other states have pending legislation to label genetically engineered foods. So, now is the time to put the pedal to the metal and get labeling across the country—something 64 other countries already have.
I hope you will join us in this effort.
The field-of-play has now moved to the state of Washington, where the people's initiative 522, "The People's Right to Know Genetically Engineered Food Act," will require food sold in retail outlets to be labeled if it contains genetically engineered ingredients. Please help us win this key GMO labeling battle and continue to build momentum for GMO labeling in other states by making a donation to the Organic Consumers Association (OCA).

Remember, as with CA Prop. 37, they need support of people like YOU to succeed. Prop. 37 failed with a very narrow margin simply because we didn't have the funds to counter the massive ad campaigns created by the No on 37 camp, led by Monsanto and other major food companies. Let's not allow Monsanto and its allies to confuse and mislead the people of Washington and Vermont as they did in California. So please, I urge you to get involved and help in any way you can.


http://articles.mercola.com/sites/articles/archive/2013/10/01/monsanto-gmo-fight.aspx  Check out the videos on this issue at Mercola.com.