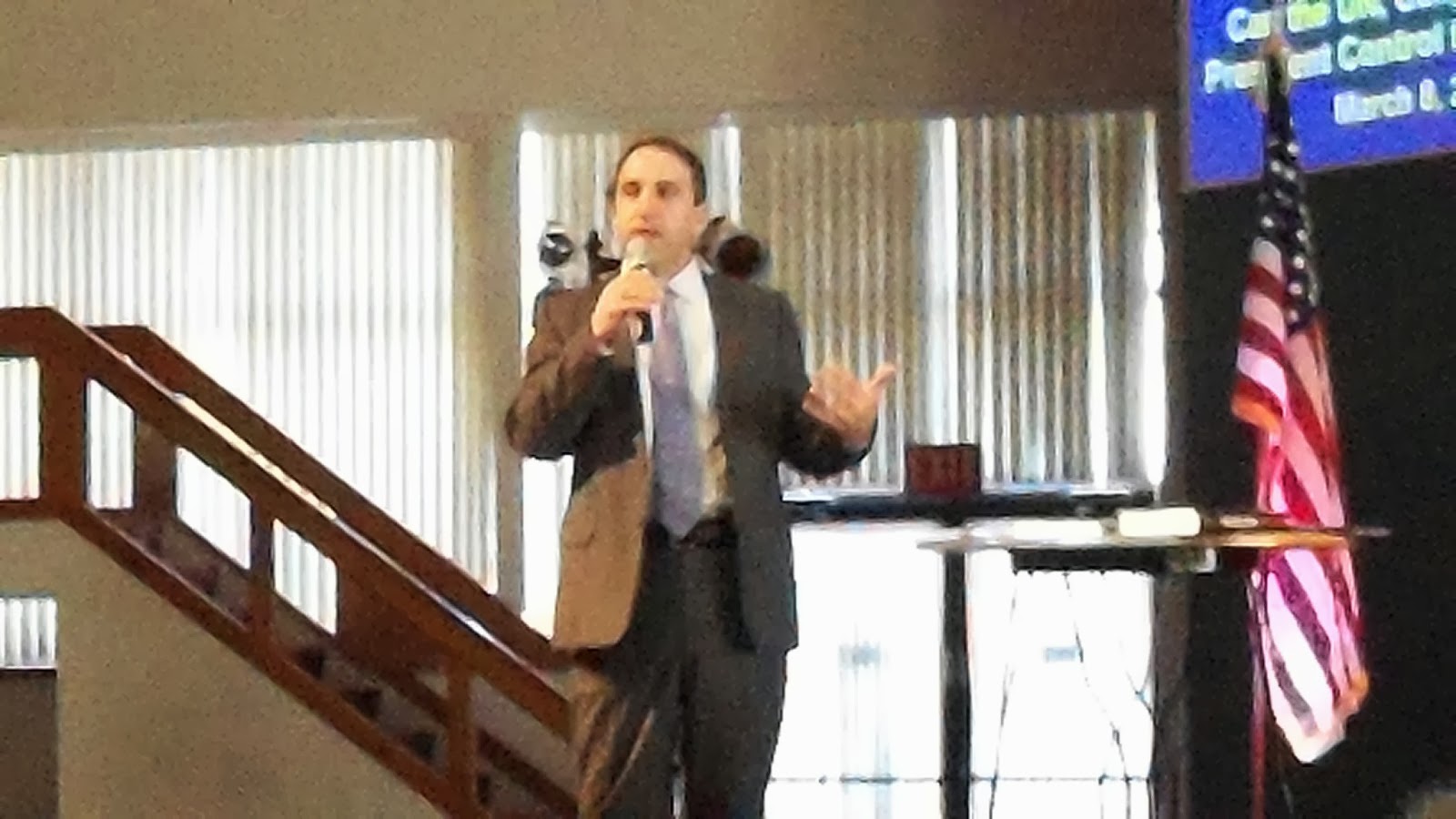 Saturday, March 8th, 2014 at the Lighthouse Worship Center, having started at 2:00PM and running straight to 5:00 PM was a special program open to the public and covering issues that are often referred to as Agenda 21. Agenda 21 purports to affect every American's life on a multitude of levels from wetland mitigation, climate change, public schooling, community planning, housing, personal property, health care and much more.

It was estimated that somewhere in the neighborhood of just over 300 people showed up for this event with several people having traveled several hours to do so. Most of the people who attended were what are often referred to as conservative in nature. Not right wing even though some may take that credit, we understand what the meaning of right wing means today and what it used to mean. There is a substantial difference between the past meaning and the present.

(Conservative:  Meaning;  1 disposed to preserve existing conditions, institutions, etc., or to restoretraditional ones, and to limit change.
2.

traditional in style or manner; avoiding novelty or showiness: conservativesuit.

People who care about their community and the future that we all seem to be heading towards. People who are trying to do what they feel is right and what is best for everyone and not just themselves. It is very important that these distinctions be pointed out and made very clear. Because our next concern is the content of the meeting that we are about to address and it is going to offend the people who attended this meeting. It's what we like to call;

Two main speakers gave their views during the vast majority of the 3 hours allotted for the meeting. Most of what they communicated, we would have to say, we agreed with the majority of it. Climate change is nothing more than a religion and has no real science behind it in the views of many. Agenda 21 is a culmination of a multitude of concepts and planning that is very quickly stripping away the rights of all American's. Again, we do not disagree.

But now here is where we highly disagree with what took place at this meeting. The tools, books, DVD's newsletters, pamphlets, and more were all designed to make anyone who tries to use these tools look like complete idiots. They are some of the least professional, highly disturbing pieces of crap put together and the folks at this meeting were told that to expect to be told that these tools would not work but what the folks who are using them need to do is go in groups and demand to know why politicians would not sign them and demand that they be signed anyway. I looked at a bunch of these forms myself and I would never sign them as they; ARE NOT IN THE BEST INTEREST OF THE PEOPLE!!!!!!

These two speakers, in our opinion, were very slick Washington, DC con men leading good people down a very dangerous and narrow path. These jokers tell a great story, and they have a very conservative pitch which is what makes them so appealing to a certain class of people, but it does not appear that the people are really looking at the end game of these jokers.

One of the tools that was given to the people at this meeting is called a “Resolution To Protect Citizen's Property Rights”, which must be read very very carefully. What it boils down to is the full shut down of planning by anyone in the county if anyone in any county could ever get this insane document signed by their county officials. If county officials did ever sign and agree to this, then the state would have to come in and take over the planning and the state is not going to sign any document like this nor give any bearing to one signed by county officials. It's dead from the very start because no county official would ever sign it. Besides, it would also be thrown out of court should it ever make it that far. No judge would ever uphold the document in our view.

What those who attended the meeting were told is to expect that county officials would not sign it, but not to accept that issue and keep fighting it anyway, not being told the real nature of why no county official would ever sign. That makes the group of folks trying to push something like this through look like a bunch of nuts. Well, if they did not read the document and understand how nuts the document is, then they are a bunch of nuts. AHHA! We start to see how these jokers work and how it very much appears they are working against the folks they profess to be trying to help.

First, the document is under a 2013 copyright by the Virginia Christian Alliance, strike one. We are going to make a copy of this that will be watermarked for news use only, therefore allowing us to make a copy to show everyone the document. This petition only states that the folks who signed the petitions want Mark Herring impeached. The reason? Good question. It isn't very clear. It's a bunch of mumbo jumbo concepts and no real reason actually stated. Only opinions are given as to why Mark Herring should be impeached. Yeah, I would worry about a petition like that. No, not really. It has no chance of happening. It only sounds good to those upset by the Gay Marriage ban being lifted.

We prefer the old style American ways of the Constitution and the Bill of Rights. Not the fascist conservative right wing. Again, there lies more issues, the people at this meeting were not what anyone would call fascists or socialists or communists by any means. They were old fashioned and were brought up and taught a much different America than what is presently taught. When polled, I do not recall seeing anyone raise their hands when it was asked if there was anyone in the audience under the age of 40. Everyone in the audience was 40 plus years and older. A different form of education at a very different level.

You can protect your property rights by protecting all of your rights and demanding that local, state and national governmental bodies adhere to the United States Constitution and the Bill of Rights, or the State Constitution and the state Bill of Rights, if your state happens to have those. You watch everything your government officials do. You ask a lot of questions and hold representatives accountable for their actions.

You ignore these traveling road show, slick Washington, DC hucksters, who talk a nice talk but lead you down the wrong roads in our view.

We will be bringing you the entire meeting on YouTube once it's all finished. It's 3 hours worth of meeting time. We are going to break the entire meeting up into 3 segments. It's several days worth of work on our part. We will also be showing you their documents as well. We will once again go over all the areas that are wrong with these documents. It was not a waste of time attending the meeting, but it sure was a major disappointment.

Beware the Agenda 21 protesters. It's not so much what they are fighting for is wrong, but it is heavily misguided. These are honest hard working folks who are trying to protect not only their own rights, but the rights of everyone. The issues are that they have been given tools that do not work by people whom, in our opinion, do not want their tools to work, and are designed to make conservative people look like fools. It is for reasons like this that many in our own organization are not Republicans nor Democrats, nor Libertarians, nor socialists nor communists or belong to any political party. It's become a complete fools game that we all refuse to play. So we beat all of them up here on this site with equal fervor.

“The objectives of the IPS, (Institute for Policy Studies), came from an agenda laid down for it by the British Round Table.... one of the most notable being to create the “New Left” as a grassroots movement in the U.S. IPS was to engender strife and unrest and spread chaos like a wildfire out of control, proliferate the “Ideas” of left-wing nihilistic socialism, support unrestricted use of drugs of all types, and be the “Big Stick” with which to beat the United States political establishment. (Nihilism: Denial of all reality; rejection of all religious and moral principles: Opposition to all constituted authority or government).

Another goal of the IPS stated, “the dismantling of all economic, political, social, and cultural institutions in the United States”. All of this is done while maintaining a facade of a liberal scholarly research center.”

It would appear that there are much larger forces at work than Agenda 21. How hard is it to undermine the opposition when invited right through the front door? Agenda 21 is a United Nations document that people are being suckered into fighting against, which means they are accepting UN mandates. Why would anyone fight the UN when we should be fighting for our Constitutional Rights as well as our Bill of Rights which by US law, has no higher authority?

Instead the questions should be asked, who elected any of the United Nations officials and or politicians to begin with, and what charter are they working from, under what authority?

Our notes to those who attended the meeting and are now reading this article; Please note that right wing no longer means what it once did nor does conservatism. There are no names now for those of us from the old school. We no longer fit in the paradigm of the new political system and that is by design. This is partially what causes such great grief in so many older people in this nation today. Most do not understand that the meanings of words have dramatically been altered without your knowledge or consent. Isn't that what your parents told you when you were young about the way you were using words? Gay once meant happy. Cool once referred to the weather outside. Groovy, what the hell? The term “man” referred to a male person and not a general answer to everything and to everyone. The list is very long on how we accepted and changed the meaning of words without our parents consent or knowledge. Now we are under the same issues our parents once faced with the meanings of words.