Gloucester, VA Board of Supervisors To Honor Themselves For Raising Your Taxes

Gloucester, Virginia:  Louise Theberge in a self serving fashion has decided to honor herself and two other board members who are leaving in January at the end of their terms as new board members will be coming in to replace them.

Carter Borden and John Northstein are the two other board members who have decided not to run for a second term.  Carter Borden a member of the secret society, the Freemansons, and John Northstein, a member of the the Rotary Club, an offshoot of the Masonic order in conjunction with other secret societies, have at least tried to positively contribute to the local community as well as prevent certain abuses within the county.

The question raised around the office has been, if Louise deserves to be recognized for her service, why isn't she waiting for the new board to come in and do so?  We would suggest that Louise has cost the taxpayer base of this community millions of dollars in unwanted and unneeded expenses along with very highly questionable, and in our opinion, based on our research, illegal ordinances that in some cases seems to have been put in place to hunt some of Gloucester's citizenry under unfair advantages for personal reasons.

She has alienated the republican party in many areas from what the word on the street says which has caused the party a lot of harm.  And here she is patting her self on the back for a job well done?  If she isn't careful, she could hurt that arm as she pats herself on the back.

Gloucester, VA BoS Self Patting On The Back from Chuck Thompson

Remember, what these people do today, affect future generations. 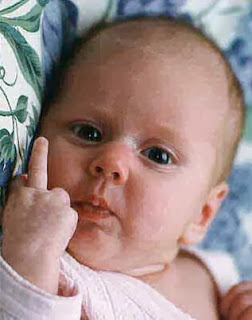 Cute baby picture to remind us all, that what we do today, affects future generations.  Are you good guardians of the public trust?