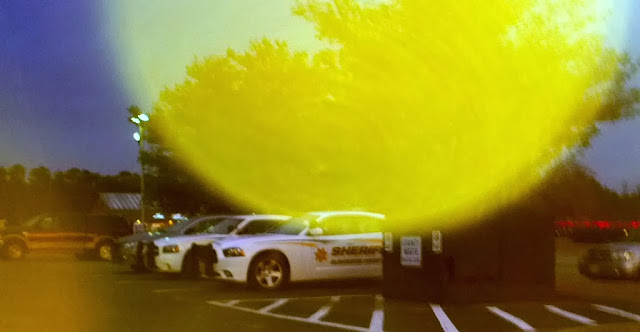 A number of Gloucester, Virginia Sheriff's Deputies decided to start their day off by fueling up with breakfast at Hardee's restaurant this morning, December 17th, 2013 around 7:00 AM.  We trolled into the parking lot and sniped this picture and then trolled back out.  Sorry it's not very clear, the stupid flash went off on us, so what you are seeing is the glare.  This time of year the deputies need to make sure they are ready for a tough day as this is the time of year that shoplifting really picks up as people who can not earn a living wage figure out some way to pick up the slack for the lack of money they have coming in.

That means lot's of extra calls to the Sheriff's office and lot's of extra responses by the deputies to charge these people because they didn't have the money to pay for what they tried to leave the store with.  (Bet if more people earned a living wage, there would be less shoplifting and less jail overcrowding).  We trolled over to the sidelines to see if maybe the deputies might be trying to prevent government employees from using government vehicles for personal use.  Turns out that this was not the case as VDOT came in and got breakfast and the deputies did nothing.  So it was a meeting to plan the day for shop with a cop and also prepare for those extra shoplifting calls.

At least we know they are out and protecting our parking lots.  The Hamburgler dares not come into this lot boy.  At least not by Hardee's.  These folks have a tough job and it's this time of year that we all should make sure we thank them for all the hard work they do for us and their extra level of protection they bring to us.