Disney and The NSA Kids Website With Our Own Ciphers Added

Do you want your kids to be part of the spying culture? Well the government does, watch Danand Vince run down Cryptokids the NSA's website for children as well as Disney's really awkward song "Shutterbug Time" a song about a helpful drone that takes photos.

Our Notes:  Because it's about the kids and making sure that they are properly indoctrinated for the future.  We must prepare them for a full invasion of their privacy and let them know that there shall be no privacy.  All that you do, we shall know.  This way they grow up with the proper ideas of what is expected and what is not and we shall know all of their secrets as there shall be no secrets.

TRAINING THE EYE TO SEE

That the faculty of sight needs training will be admitted by every reasonable person, but how best to give the eye this advantage is a question which has never been settled. An English hunter, the author of a book on Norway, gives some interesting hints upon the matter:
The reason that the different characteristics of tracks are not observed by the untrained eye is not because they are so very small as to be invisible, but because they are—to that eye—so inconspicuous as to escape notice. In the same way the townsman will stare straight at a grouse in the heather, or a trout poised above the gravel in the brook, and will not see them; not because they are too small, but because he does not know what they look like in those positions. He does not know, in fact, what he is looking for, and a magnifying glass would in no wise help him. To the man who does not know what to look for, the lens may be a hindrance, because it alters the proportions to which his mind is accustomed, and still more because its field is too limited.—Youth’s Companion.
[Pg 7]
LESSON I
This lesson is intended to teach the code or key. Attention is called to the mathematical regularity of its construction, which will enable the teacher to demonstrate it in a very simple manner. First write the column of numbers from 1 to 24. Then opposite number 1 place five red circles in a row. Under the last one in this row, and on a line with number 2 place a blue circle, and continue alternating red and blue down the column. Then under the 4th red circle in the 1st row place another red one, then two blue ones, alternating 2 reds with 2 blues down the column. In the 3rd column the reds and blues alternate in sets of four; in the 2nd column, in sets of eight, and in the 1st column, in sets of 16. Since only 24 combinations are necessary, the last eight of the possible 32 have been omitted. Now opposite these 24 combinations place the letters of the alphabet in regular order, remembering that I and J, U and V are used interchangeably.
To facilitate the use of the code the red and the blue circles may be designated by small a and small b respectively. The right hand section of this lesson gives the code worked out on this plan and makes future reference easy. In all the succeeding lessons one form (whether it be blocks, beads, yarn or what not) will be called the a form, and the other will be called the b form. On account of the nature of the code, the a forms always predominate; and in getting together materials for this work, the teacher should be guided accordingly.
[Pg 8]
[Pg 9] 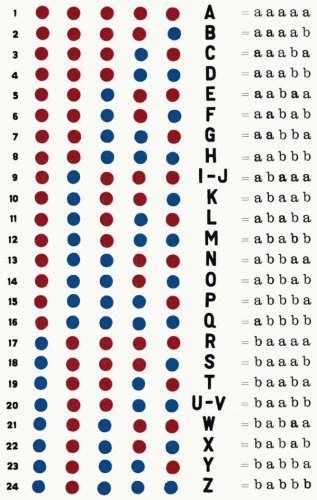 Short lines represent the a form, long lines, the b form. The cipher word is “the.” Various forms of sewing cards, or yarns of different colors may be used. 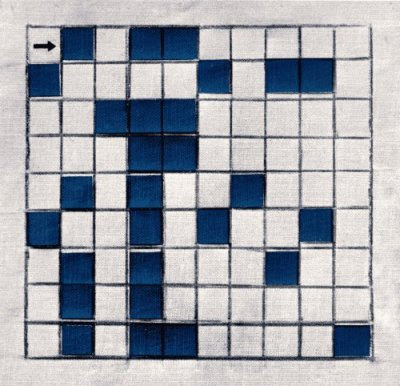 In this weaving mat the light squares represent the a form, the dark ones, the b form. The arrow marks the starting point, and the reading proceeds from left to right in each line. The cipher message is “Mary had a little lamb.” Any sentence containing the requisite number of letters can be inserted on the same principle.
[Pg 14]
[Pg 15]
LESSON IV 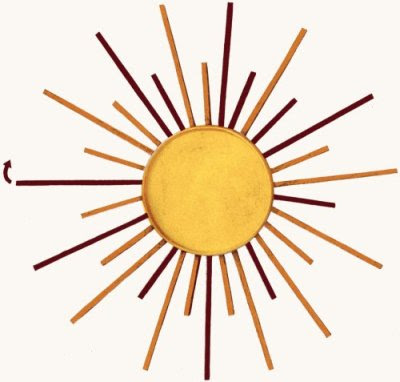 This lesson embodies what may be designated as a symbolic cipher design. This design conveys the idea of the setting sun, and hence the cipher word contained within is “sunset.” Red sticks represent the b form, orange sticks, the a form. The arrow marks the starting point, and the reading proceeds in a clockwise direction.
[Pg 16]
[Pg 17]
LESSON V 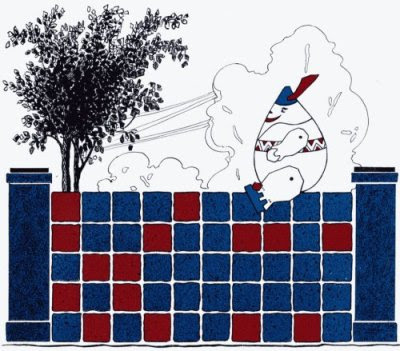 This is another symbolic cipher design picturing “Humpty-Dumpty.” The blue squares represent the a form, the red squares theb form. The cipher message is “sat on a wall.” The blank squares can be filled by colored crayons or blocks, and the children can thus practice the building of the message by referring to the code in Lesson I.
[Pg 18]
[Pg 19]
LESSON VI

Another symbolic cipher design in which the hens represent the b form, the chicks the a form. The cipher word is “egg,” reading from left to right.
This sort of symbolic cipher designing is susceptible of endless variation, and gives a hint of the possibility of drawing cipher pictures.
A sufficient supply is furnished so that when cut out, the hens and chicks may be utilized to spell out various words under the direction of the teacher.