We Did Our Part, Too, Declares Gloucester Residents of Role in the Revolutionary War

The Battle of the Hook and Gloucester’s role in the Revolutionary War will be featured in the September edition of the Inn at Warner Hall Dinner and Discussion series. 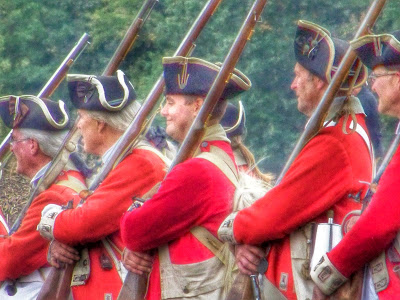 
When it comes to telling the story of the Revolutionary War, the Inn at Warner Hall in Gloucester, Va. is among the first to say “we did our part, too.”
On Wednesday, Sept. 25 at 5:30 p.m., guests at the sixth event at the Inn at Warner Hall’s Dinner and Discussion series will learn more about Gloucester County’s pivotal role in securing Patriot victory in the Revolutionary War, specifically at the Battle of the Hook that immediately preceded the Siege at Yorktown.

The Inn at Warner Hall’s Dinner and Discussion series features a prominent speaker, gourmet buffet dinner and thoughtful conversation.
Warren Deal, Committee Chairman for the Battle of the Hook reenactment event that will take place on the Warner Hall grounds Oct. 19 and 20, will lead the discussion.

“This country was founded on principles of individual liberty and the opportunity to achieve and improve for everyone to a level that had not been seen in history then nor has been seen since,” Deal said.
“This was achieved with a great sacrifice by ordinary men and women as well as those who we typically consider as the founders. It is my hope that the Battle of the Hook and other living history activities will keep alive everyone’s knowledge and appreciation of the miracle that took place from 1776 to 1781.”
By day, Deal is a Generation Project Manager for Dominion Virginia Power. He graduated from Gloucester High School and Virginia Tech’s College of Engineering.

Deal is also a member and officer of the recreated Seventh Virginia Regiment, a Revolutionary War re-enactment group, and has participated in living history and re-enactment events from North Carolina to Maine for seven years. He is currently the Lieutenant of the Rifle Company of the Seventh Virginia and his unit will participate in the Battle of the Hook reenactment this year.
The reenactment will bring more than 1,000 infantry, cavalry, artillery and maritime landing reenactors from across the country to the Inn at Warner Hall, home of President George Washington’s ancestors.

The Revolutionary War-era “generation did not get it perfect and they it left to us to keep working at building this country to fulfill the promises and liberties stated in the Declaration and the Constitution. We will do a lesser job if we do not remember and learn from the ‘Revolutionary Generation.’”
The “Dinner and Discussion” events are $50 per person and include dinner, complimentary wine and the featured speaker.
Seating is limited. Contact Warner Hall to reserve a seat at 800.331.2720 or info(at)warnerhall(dot)com.

The October 30 Dinner and Discussion with feature Dr. Quentin Kidd, a professor of political science and Director of the Judy Ford Wason Center for Public Policy at Christopher Newport University in Newport News, Va. He will lead a discussion on the upcoming elections and Virginia’s political landscape.

ABOUT THE INN AT WARNER HALL: 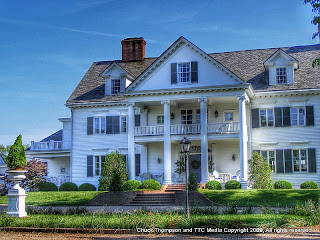 Ideally situated at the head of the Severn River in Gloucester County, the manor house at Warner Hall stands on a neck of land occupied and built upon continually from the mid-17th century. The original six hundred-acre plantation site was established by Augustine Warner as a "land grant" from the British Crown. Augustine Warner received the acreage in exchange for bringing twelve settlers across the Atlantic Ocean to the Jamestown Settlement.
The two families associated with the property from this early period until well into the 19th century, the Warners and the Lewises, were among the most prominent families in Colonial Virginia. Some of the most recognized names in American history are direct descendants of Augustine Warner – George Washington, the first president of the United States, Robert E. Lee, the most famous Civil War General and Captain Meriwether Lewis, renowned American explorer of the Lewis & Clark expedition.  (Our notes;  Also the site where part of the first American Revolution took place with Bacon's Rebellion).

Queen Elizabeth II, the current monarch of England, is a direct descendent of Augustine Warner through the Bowes-Lyon family and the Earl of Strathmore. In England, Warner Hall is referred to as "The home of the Queen’s American ancestors."

For Theresa and Troy Stavens, the current stewards of Warner Hall and the Inn’s owners, Warner Hall is a dream come true. Their passion for hospitality and historic preservation led them to Warner Hall where they saw the perfect opportunity to use their financial management and marketing skills to preserve an historical property and pursue their real passion – making people happy.

Women of the American Revolution from Chuck Thompson

As part of the celebration of the upcoming Battle of the Hook, we are giving away this special ebook.  You can download a free copy from our SlideShare site by logging in with either a Facebook account or a LinkedIn account.  Another option is to create a free account.  To read the book here, left click on the icon at the very bottom far right of the document container and it will open into full screen mode.  To exit full screen mode, hit your escape key on your keyboard.